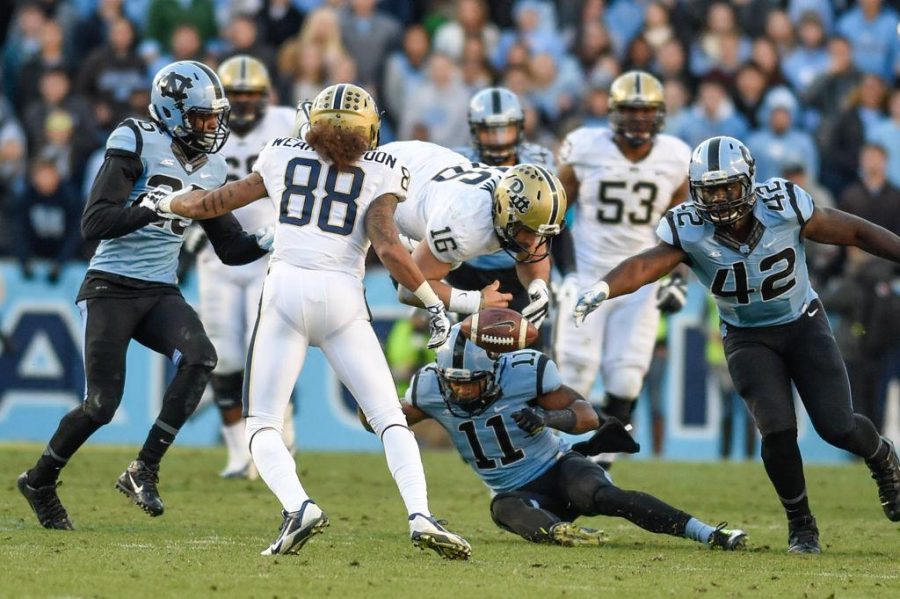 Offensive efficiency, combined with firm defensive play, helped the football team secure and maintain an early lead against North Carolina on Saturday afternoon, but it wouldn’t hold. In a game where Pitt allowed 502 total offensive yards, a Tar Heel touchdown with 50 seconds left and a fumble by Pitt quarterback Chad Voytik resulted in a 40-35 loss for the visitors.

On the fifth play of the game, running back James Conner did what he has done all season. After finding a large hole on the left side of the field, he exploded through it like a pinball from a spring, not stopping until he reached the end zone 56 yards away.

The sophomore added a 16-yard score on the ground near the end of the opening quarter, extending Pitt’s lead to 14. He finished with 220 yards and four touchdowns.

His classmate Tyler Boyd contributed to the team’s initial offensive success too, collecting a short pass from Voytik and running a straight line the remaining 42 yards into the end zone, dragging a defender with him the last few strides.

With the win, UNC gets one game closer to bowl eligibility with two games remaining.

After struggling to put a substantial offensive effort together, the Tar Heels (5-5, 3-3 ACC) found success in the second quarter. Quarterback Marquise Williams took to the ground from 23 yards out and advanced freely towards the end zone, pushing Lafayette Pitts backwards with him across the goalline.

He’d score again right before the half, from two yards out. A two-point conversion pass attempt on the next play failed, however, so Pitt entered the break with a 21-13 lead.

UNC’s momentum carried over into the second half. Starting with the ball when play resumed, Williams threw to Ryan Switzer in the backfield and the sophomore wide receiver outran everyone 63 yards in route to the end zone. The PAT missed, leaving Pitt with a touchdown advantage.

Back and forth scores followed, as Conner got his third touchdown on the ensuing drive, a two-yard run.

But UNC maintained its rhythm.

Aided by a 15-yard penalty on Pitt defensive end Darryl Render for roughing the passer, the Tar Heels moved with ease towards another touchdown. This one was a 17-yard run by Charles Brunson.

Both offenses stalled afterwards before the hosts completed their comeback in the fourth quarter with yet another score on the ground, overtaking Pitt 34-28.

The score remained as the fourth quarter wound down before the Panthers briefly regained control, 35-34 with Conner’s– and the team’s– final points.

Receiving the ball with just over three and half minutes left, the Tar Heels moved with urgency into scoring position.

Needing a touchdown and facing fourth down and two, the Tar Heels went for it and converted.

On the ensuing play, Williams found a teammate for a 23-yard gain through the air, which ended on the one-yard-line.

T.J. Logan ran into the end zone on the next snap.

After another failed two-point conversion. Pitt had 45 seconds to score a touchdown. Voytik scrambled for 21 yards nearly to midfield before losing the ball upon contact from Malik Simmons. UNC recovered, running out the clock on the next play and sealing the win.