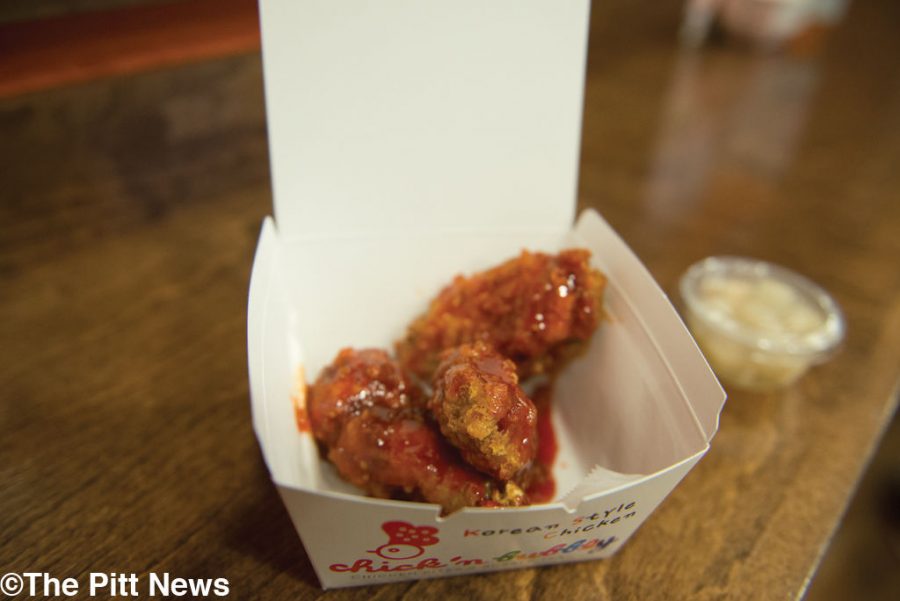 By Abby Hoffman / For The Pitt News

Sometimes, the stir-fry station at 360 Degrees in Market Central just doesn’t cut it.

Pitt students are constantly on the hunt for the next best meal, and Asian eats can provide a nice shake-up to the average person’s diet.

Walking down Forbes Avenue, restaurants ranging from Panera Bread to Noodles & Company can be located and easily accessed by hungry students in a hurry. Basically, anything that you would expect to appear on a college campus is within walking distance from residence halls and academic buildings. But if you’re feeling adventurous, one swift right turn onto Oakland Avenue between Forbes and Fifth avenues will transport you into an alternative universe of ethnic cuisine served from five local Pittsburgh eateries.

The first storefront on the left is Sushi Boat. Out of the five restaurants, Sushi Boat is the most comparable to any other Japanese eat-in or take-out restaurant. For example, a typical meal may consist of edamame ($3.55) or wakame salad ($7.50) to start, followed by a spicy salmon roll ($4.50) and California roll ($3.25). It’s just your typical weeknight feast — nothing too fancy.

The next stop on Oakland Avenue is Sushi Fuku (“fuku” means lucky in Japanese) — also known as the Chipotle of Asian-inspired cuisine. When you walk into the restaurant, the first thing that catches your eye is the way that everything is set up. For visual aid — and in case you have never stepped foot in the Pitt mecca of Sushi Fuku — I’ll take you on a step-by-step ordering journey.

First, enter Sushi Fuku and secure a spot in the probably packed line. Next, turn your attention to the three computerized screens that display the various options available to order. For maximum fullness, I suggest getting a bowl and filling it with a protein, some veggies and toppings and then a drizzle of sauce or flavored mayo. Bowls range from $6.15 to $8.25, depending on what protein you select. The sushi rolls are also delicious — and a terrific bargain. Although most sushi spots give customers six to eight pieces per roll, Sushi Fuku offers 10-piece rolls with prices between $6.15 and $10. Finally, pay for your delightful meal, and take a seat at one of the tables.

Next is Oishii Bento, or “the yummy lunchbox,” as translated from Japanese — and Oishii surely deserves this title. Although the location is small, the food makes up for it in flavor. Before my journey to Oishii, I did some research and found that the chicken katsu bento is arguably the best thing on the menu, so of course I had to try it. The chicken is described as a Japanese-style chicken cutlet and is tossed in a tonkatsu sauce. For about $9, I received an entire cutlet, a large portion of white sticky rice, two dumplings, kimchi (spicy pickled cabbage) and a side salad. Overall, the experience and the food were worth the wait caused by the lunchtime rush.

Directly next to Oishii Bento is Chick’n Bubbly, a newer restaurant that serves a variety of Korean-style chicken bites and bubble tea. Pick from your choice of chicken wings, drumsticks or both, tossed in either a sweet and spicy sauce or a soy garlic sauce. Chick’n Bubbly offers snack size for $5.99, small for $10.99, medium for $18.99 and large for $28.99 — now you have something to munch on no matter the time of day. An array of sides are also featured on the menu, such as french fries and pickles, but let’s be honest — students mostly just show up for the wing-and-bubbly combo. To go with your spicy meal, Chick’n Bubbly offers milk teas, green teas and slushies. This restaurant is more of a lunch or snack destination than a dinner stop.

The last stop on our Asian-fusion tour of Oakland Avenue is Szechuan Express. Just as Sushi Boat is your typical Japanese-style eatery, Szechuan is very similar to any local Chinese-style restaurant. From classic wonton soup to steamed dumplings and Kung Pao chicken, Szechuan has it all — and for a very affordable price. Full vegetable meals cost anywhere from $4.73 to $6.11, pork and chicken dishes all cost $6.38 and beef and seafood options cost $6.60. The menu is endless, so I’d recommend making multiple Szechuan runs before your time at Pitt comes to a close.

From Chinese to Korean to Japanese cuisine, one street in Oakland houses a burst of diverse eating options that shouldn’t be overlooked.