Forget pitas, hummus with a side of politics 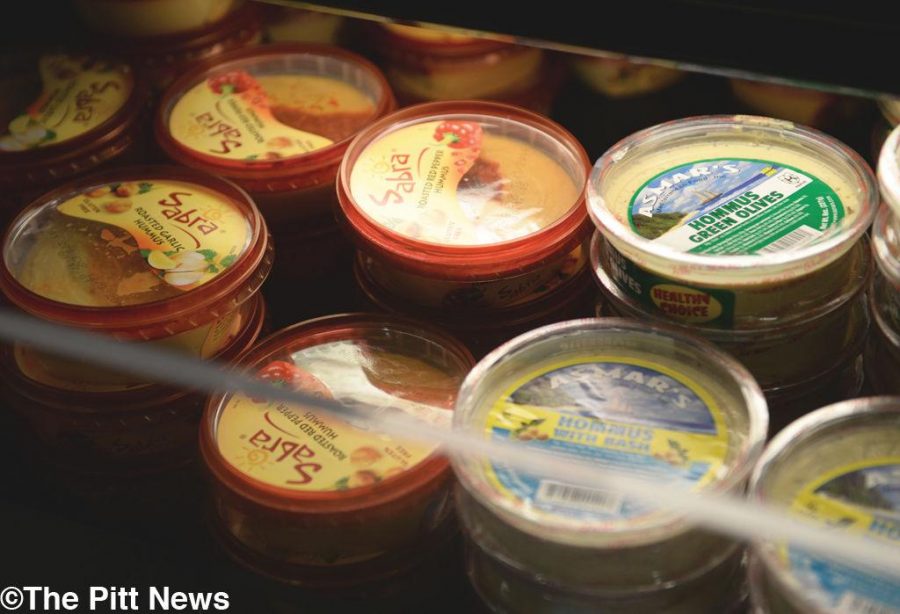 The University will now offer an alternative hummus option on campus, one it hopes won’t leave a bitter taste for Pitt’s Students for Justice in Palestine.

As part of the Boycott Divestment and Sanction (BDS) Movement, which the internationally-based Palestinian Civil Society organized, the student group is avoiding products made by companies that support the Israeli Defense Forces, according to its president Hadeel Salameh. Sabra hummus, which was previously the only hummus option Pitt offered in its dining facilities, is on the BDS Movement’s list of products to stay away from.

By buying Sabra hummus, the club believes consumers are funding the Israeli Defense Forces, which have been in conflict with Hamas, a Palestinian Islamic organization, and Gazan civilians over the summer. Students for Justice in Palestine argue that if the University were to stop purchasing Sabra hummus in addition to students’ boycotting the company, then less funding would reach the Israeli army. After several meetings with the student group, Sodexo and Pitt’s Dining Services decided to provide an alternative option to Sabra for students who wish to boycott the company. The alternative, Asmar hummus, became available at Pitt on Nov. 14. Sabra products will also remain on shelves at the University.

“Our job is to tell students about BDS, and it’s up to [them] whether [they] want to boycott or not,” Salameh, a senior and majoring in English writing and studio arts, said. “We’re just spreading awareness.”

The group bases its argument against purchasing Sabra hummus on the Strauss Group, an Israeli food company and of one Sabra’s joint owners, which had come out in support of the Israeli Defense Forces in a statement on its website. The statement has since been removed.

Representatives from the Strauss Group declined to comment on the company’s support for the Israeli Defense Forces.

Other than Sabra, the BDS Movement’s website cites major corporations such as HP, Volvo and Caterpillar as supporters of the Israeli Defense Forces.

Members of Students for Justice in Palestine said they want the boycott to cultivate a peaceful resolution to the conflict between Israel and the Palestinian territory.

According to Pitt spokesman John Fedele, Asmar hummus, the new, Lebanon-based alternative, is comparably priced and will be positioned next to the Sabra hummus in University dining facilities, including Quick Zone.

“This will allow students freedom of choice, so that those who choose to boycott the Sabra product can do so, without impinging on the rights of fellow students to make whatever choice they feel is appropriate,” Fedele said.

Salameh said the group is happy with the new offering, but its boycott is not yet over.

“Having an alternative offering was step one. Step two, for us, is getting the University to only buy the alternative and discontinue its purchases of Sabra from Sodexo,” Salameh said.

The meetings between the student group, Sodexo and Pitt’s Dining Services began at the end of October. Salameh said the group has not yet decided on any future plans for the boycott and will continue meeting with the University to finalize its plans. The group is still in discussion with the University to accomplish its second goal.

To bring Asmar hummus to campus, the group worked with Jim Earle, assistant vice chancellor for business, via email, and met with Abdou Cole, the general manager of Sodexo at Pitt.

“A university is a place committed to the free exchange of ideas, not a place that tries to silence opposing views,” Fedele said. “While the food service is not usually the venue in which these kinds of debates occur, it nonetheless can reflect the free speech aspect of the institution.”

The student group is expecting backlash from the change but is determined to keep fighting.

Samantha Rothman, president of a Pitt’s Panthers for Israel, said she had heard rumors that students were in contact with Sodexo about removing Sabra hummus but was never told anything officially as a student leader.

“I don’t have a problem with Sodexo offering an alternative brand, but I don’t think it [would be] fair to remove Sabra products as one of the choices,” Rothman, a sophomore studying business, said.

Rothman said it would be wrong for the University to prioritize interests of one group over another, as it would be if it followed through with Students for Justice in Palestine’s goal to eliminate all Sabra products from campus.

“It would be wrong for Sodexo to get involved in the politics behind the boycott of Sabra products,” Rothman said.

Ronnie Debiec, a sophomore chemistry major, said he understands where the group is coming from, but would miss Sabra hummus if it were removed completely from campus dining locations.

Debiec said he may try the other brand, but he would always feel more comfortable with Sabra.

“I realize that a boycott is a really good way to further their cause. However, I think that it is a very hard thing to do,” Debiec said. “It would be hard to convince everyone to try the alternative instead of the brand name.”