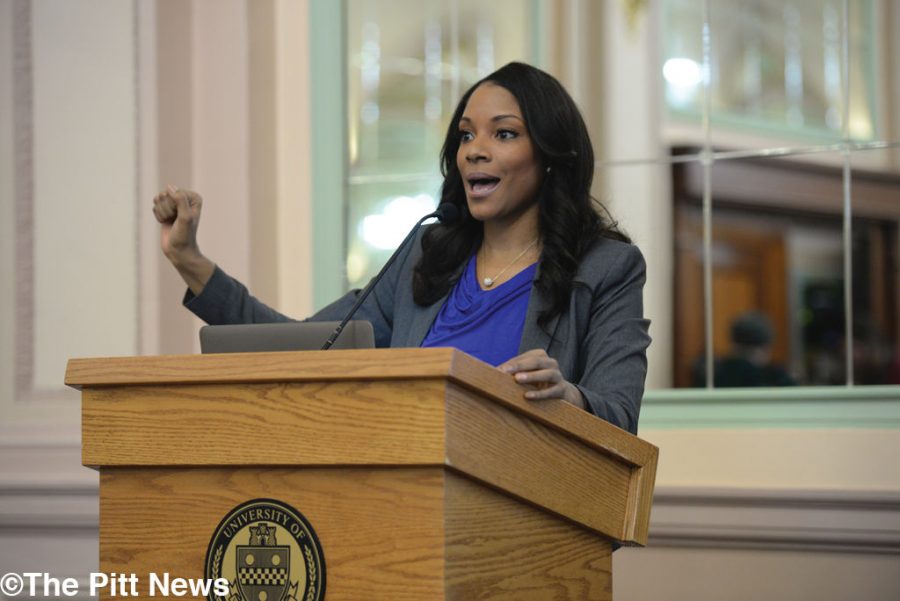 Go with a buddy. Don’t drink too much, and you’ll be fine. You totally raped that test.

To some, phrases like these may seem casual and normal, possibly even humorous at times, but, according to Zerlina Maxwell, a political analyst, commentator and writer, these phrases are part of what condones rape culture.

On Nov. 19, Maxwell spoke at an event hosted by Slutciety and sponsored by the Political Science Department. In her presentation, titled “From Catcalling to Sexual Assault: How We Can All Work to End Gender-Based Violence,” Maxwell discussed rape culture and what college students can do to combat it. More than 200 students attended the event in the William Pitt Union Ballroom.

“Our goal is to create a space for students who are marginalized on the basis of their gender, religion, race, class or sexuality, among many other factors, to speak their voice in a scholarly feminist setting,” O’Connell said.

One of Maxwell’s goals is to get people to teach men not to rape, rather than teaching women ways not to be raped.

Throughout her presentation, Maxwell, who is a rape survivor herself, continued to come back to the basis that women should not have to be guided to act in a certain way to prevent being raped.

Maxwell also discussed the prevalence of rape culture in the media and how it is overlooked, whether it be in music, advertisements or current events. Maxwell showed the audience news clips, ad campaigns and song lyrics that emphasized rape culture.

While the audience gasped, Maxwell asked: Why did the people involved in producing these forms of media find the content acceptable before their release?

Maxwell focused on the Steubenville, Ohio, rape case in which two male high school football players raped a 16-year-old girl in August 2012 at a party.

A news clip of CNN’s coverage of the trial, Maxwell said, showed more sympathy for the rapists than the actual rape victim.

Poppy Harlow, a CNN correspondent, portrayed the rapists as “two young men that had such promising futures.” This coverage, Maxwell said, is problematic, because it overlooked the offenders’ crime, which violated a young girl, whose life is forever altered.

“Yeah, it pisses me off every time,” Maxwell said after showing the clip.

One ad campaign Maxwell referenced came from the Pennsylvania Liquor Control Board and featured a partially exposed female’s lower half with the words, “She didn’t want to do it, but she couldn’t say no.”

Maxwell said the ad insinuates women shouldn’t drink because they will be sexually assaulted, which perpetuates victim blaming.

“One of the side effects of drinking is a hangover — not rape,” Maxwell said. “If you are giving someone drinks to loosen them up so that they will have sex with you, you are doing it wrong.”

In light of the recent allegations toward Bill Cosby, Maxwell brought up the topic of the false rape allegations myth.

Maxwell dismissed the myth, declining the idea that “women are waking up one morning,” and deciding to falsely accuse others of sexual assault.

“The narrative we hear all the time is that women make things up,” Maxwell said.

She referenced a FBI statistic, showing only 2 percent of sexual assault claims turn out to be false allegations.

Though many may believe that Maxwell’s appearance was an event catered only toward women, Maxwell said she was pleased with the number of male students in the crowd as well.

Included in Maxwell’s presentation was a list of ways to teach men not to rape. These five guidelines included teaching men about legal consent and bystander intervention, as well as how to express healthy masculinity.

Gabriel Naccarato, a sophomore studying administration of justice and English writing, said he attended last night because “stopping sexual assault is a very important issue no matter who you are, no matter what [gender] you identify as.”

“I want to follow in the footsteps of Zerlina and have a voice in the public about being a survivor and victim blaming,” Brady said. “I just got this fire recently in me.”

Brady said she appreciated Maxwell’s focus on “inclusion” for people who are not survivors, particularly men.

“As a survivor, it feels very much about me, and I forget that it’s not just about me, and I need to take my voice back to educate people,” Brady said. “If others aren’t listening, what’s the point?”