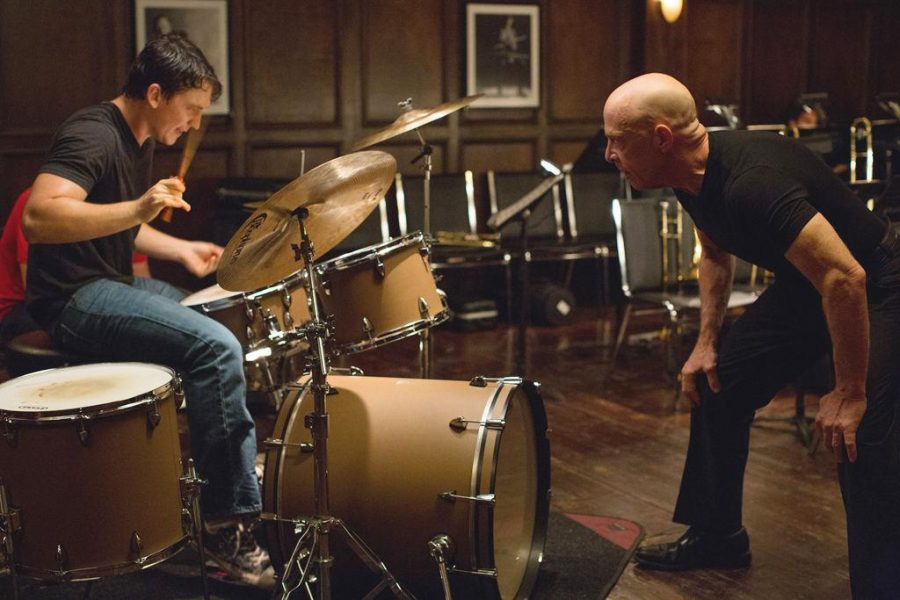 Rated: R for strong language, including some sexual references

Starts Friday at The Manor Theatre

The most intimidating villain you’ll see on the big screen this year doesn’t have horns, fire a gun or come close to demolishing a city — but he sports a Lex Luthor haircut and a stark, tight-fitting, black T-shirt that reveals his chiseled, middle-aged muscles.

He’s Terence Fletcher (J.K. Simmons), a long-time jazz instructor at a prestigious (and fictional) New York music school. Fletcher doesn’t believe in telling his students “good job,” but he instead hurls chairs at them, screams in their faces and makes a few of them cry. In Fletcher’s eyes, that’s the way to sort out the good students from the great.

Andrew Neyman (Miles Teller), one of Fletcher’s newest drum students, dedicates his life to reaching the latter category — and not just within his school, but of all time. The film opens with Fletcher walking in on one of Andrew’s private rehearsals at the school. Fletcher seems to dismiss him, but he offers Andrew a spot in the school’s top jazz band the next day. From then on, Andrew surrenders his entire physical and emotional being to Fletcher’s band, choosing the bloody blisters and late rehearsals over a satisfying relationship with his girlfriend (Melissa Benoist).

As an audience member, it’s hard not to similarly submit yourself to Simmons’ towering performance. Whether he’s bursting through doors, lobbing slurs at his students or silently observing from behind a closed door, Simmons is a magnetic force. Fletcher is a nightmare of a musical drill sergeant, but Simmons nails the comic delivery enough to make the character a charismatic villain. His snappy barbs lighten the battlefield, but they prompt more nervous laughter than guffaws — it’s hard to laugh knowing there’s a violent outburst constantly looming around the corner.

Although “Whiplash” is very much driven by an extraordinary performance by Simmons and an adequate near-star turn by Teller, the real star sits behind the camera. Director and screenwriter Damien Chazelle’s second film following 2009’s “Guy and Madeline on a Park Bench” suggests that his career will be a rich and exhilarating one to follow. In “Whiplash,” Chazelle wrings more tension out of a band rehearsal than you’d find in a Jason Bourne car chase. While an ordinary band practice might be characterized by monotony and repetition, Fletcher’s rehearsals make these conventions sinister. An error on the fourth play-through could draw some shouting, but the fifth mistake could get a chair thrown at your head.

Chazelle distances “Whiplash” from other performance movies by making the concert scenes even more visceral. In Chazelle’s universe, these are the big, dramatic action set-pieces. The camera zips back and forth between zoomed-in views of individual instruments. In the movie’s final performance, the camera sharply pans between Fletcher and Andrew to visualize their conflict and the breakneck, snappy pace of a jazz show.

But the jazz scenes aren’t Chazelle’s only opportunities to build tension. When you write a character as absorbing as Fletcher, he can swallow the whole movie — and also inject fear into scenes where he’s not onscreen. Whether Andrew sleeps through his alarm set for a rehearsal or cruises through traffic to retrieve forgotten drumsticks, Fletcher’s imminent wrath gives these scenes the urgency of a thriller. Perhaps Chazelle included the line about “good job” being the most dangerous words for a young artist to hear so critics would feel more comfortable showering “Whiplash” with all of the more hyperbolic adjectives it deserves.