After four years away, Wignot returns to basketball 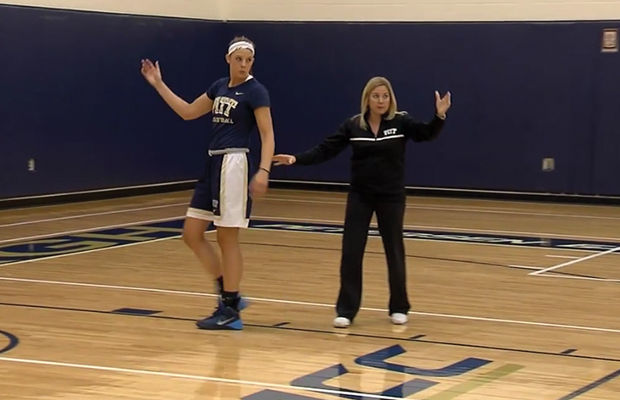 While reading the article, something caught the then first-year Pitt women’s basketball coach’s eye: a name.

“I knew it wasn’t a common name,” McConnell-Serio said. “I remember thinking, ‘There cannot be two Monica Wignots’”.

During her senior year of high school at Holy Redeemer in Wilkes-Barre, Pa., it seemed to everyone that Monica Wignot was poised to begin a promising collegiate basketball career after graduation. A star all throughout high school, the 6-foot-3-inch Wignot tallied 1,000 points during her high school career. She was a two-time conference MVP and a three-time all-state team selection.

But much to the surprise ­— and perhaps chagrin — of her family, friends and coaches, Wignot had a different sport with a net in mind: volleyball.

Wignot was a skilled volleyball player in high school despite never having played before her freshman year, earning all-state honors three times and leading her team to the state semi-finals twice. She received countless offers from colleges, including one from McConnell-Serio, the then head coach at Duquesne University. Wignot even verbally committed to the University of Delaware to play basketball earlier in her senior year. It was an unprecedented move for a basketball player of her caliber to throw the sport to the wayside.

“I had tried to recruit her at Duquesne six years ago,” McConnell-Serio said. “Then I found out she wanted to play volleyball, so I stopped recruiting her. I didn’t know where she ended up.”

Eventually, Wignot would garner a grand total of one volleyball scholarship offer, coming from the University of Pittsburgh. And that was something that Wignot decided to jump on.

“Personally, I felt like I was burnt out,” Wignot said. “I had been playing basketball since I was five or six, and volleyball was fresh and new. And once I was presented the opportunity to play in college, I knew it was time to switch it up.”

Wignot said she felt a little bit of guilt, remembering that her parents had driven her to countless AAU games and practices, while coaches helped her sort out her recruitment offers.

“In a sense, I kind of felt bad because I didn’t want to make it seem like all of their hard work was for nothing,” Wignot said. “I really did appreciate everything that all my coaches and my parents did for me. But, overall, they were still happy and supportive, because it was what I wanted.”

Wignot appeared to have made the right decision, as she ended up producing a stellar four-year career as a key member of the Panthers volleyball team, even making second-team all-Big East in 2012 and finishing with 822 kills in 93 matches. Her career as a Panther appeared to be over — that is until McConnell-Serio decided to make a phone call.

The coach decided to reach out to Pitt’s head volleyball coach Dan Fisher to make some inquiries.

“I remember telling [McConnell-Serio], ‘I don’t know if she can shoot or dribble,” Fisher said, now in his second year at Pitt, “but I know that she’s 6-foot-3 and can touch the rim. How many players do you have on your team that can do that?’”

Still, it wasn’t a quick decision, Fisher said, as Wignot was apprehensive about her lack of basketball experience over the past four years.

“I don’t think at the time Mo was totally ready to say yes,” Fisher said. “It took a bit of convincing.”

Eventually, the two sides realized that the partnership could be mutually beneficial.

“The one thing she wanted to do was go to grad school, and she wanted to stay here at Pitt to do it,” McConnell-Serio said, “so it ended up being an opportunity for the both of us.”

Wignot needed to get basketball-ready over the summer after not having stepped on a court competitively in four years, going through countless basketball workouts, playing in a summer league and scrimmaging against the Panthers team.

“She spent some time getting back into basketball skills,” McConnell-Serio said. “She’s had some time to work on her skills, and we’re happy with her progress … She hasn’t skipped a beat.”

Despite the lack of recent experience, the Panthers will rely heavily on Wignot this season. The second-tallest player on the roster, Wignot’s versatility is lauded by McConnell-Serio, who cited Wignot’s ability to play both along the perimeter and in the post as one of her most important skills.

“She will be a major contributor for us, I can already see it,” McConnell-Serio said. “She’s going to play a lot.”