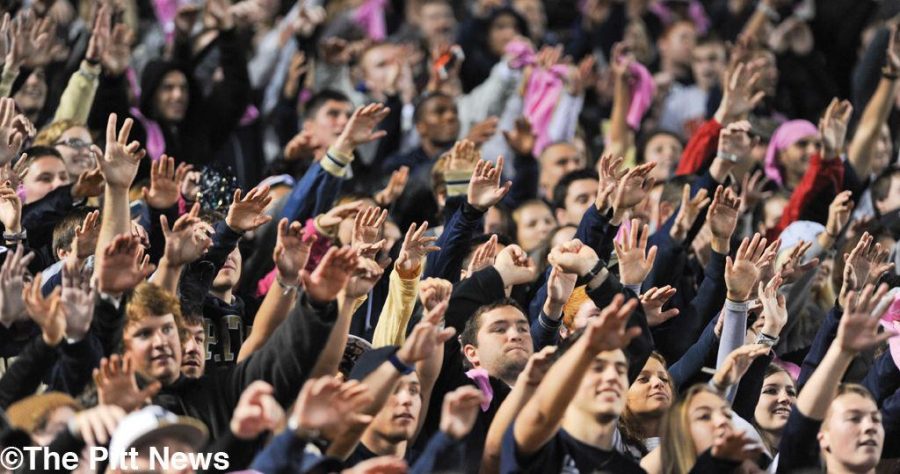 By Abby Hoffman / For The Pitt News

As a University with nearly 30,000 students, some may argue that there is no way for the entire Pitt population to rally together and generate enough school spirit to rattle an entire stadium, but one popular ‘60s song makes it a possibility.

At home football games every fall, Panther fans anticipate the end of the third quarter, when Pitt students, families and Pittsburgh natives alike throw their arms around each other and belt out the lyrics to Neil Diamond’s “Sweet Caroline.” Pitt’s rendition adds on a few words to better suit our Panther pride: “Let’s go Pitt!” and “Go Pitt!” replace the instrumental walkdown during the chorus.

Though students now follow this tradition at every football game, “Sweet Caroline” has not always been a part of Pitt culture.

Justin Acierno, a former Pitt football player and current director of marketing and ticket operations at the University, was responsible for improving the fan experience in 2008 by engaging students during sporting events and maintaining a level of interest throughout the game.

In an effort to increase involvement, Acierno enlisted the help of various student organizations, such as Greek life, the Oakland Zoo and the marketing academy. Together, this group of students and staff concocted the idea to play “Sweet Caroline” at the end of the third quarter at home football games.

Acierno thought “Sweet Caroline” was an appropriate option because the song lent itself to incorporating “Pitt-centric” terms.

“Everything fit in, and everyone agreed that it was fitting to play at student functions,” he said.

To Annika Napier-Smith, a freshman who doesn’t consider herself a die-hard sports fan, “Sweet Caroline” provides an incentive to stick around at the football games.

“‘Sweet Caroline’ is something I look forward to at the football games because I am not a football super-fan,” Smith said. “But it’s a nice way to feel connected to everyone at the game and at Pitt.”

The song also creates a bridge between the ages — college students, parents and grandparents are mostly all familiar with the upbeat rhythms and cheery melody of the song.

“When [“Sweet Caroline”] plays, say, on a jukebox, students will sing, older demographics know the song well and it still resonates with all generations,” Acierno said.

Once he altered the song to incorporate a Pitt theme, Acierno had to teach it to the student section. Members of the Oakland Zoo printed out the lyrics to distribute during the third quarter of the football games. The lyrics also rolled on the big screen at Heinz field, helping the rest of the Panther fans become acclimated with the new tradition.

Almost everyone in the Pitt community knows “Sweet Caroline,” but not everyone thinks that the song brings excitement to football games, especially if it isn’t a close game. Alexsys Brown, a junior, isn’t inclined to stick around for the Diamond tune.

“‘Sweet Caroline’ does not personally encourage me to stay … The song is not encouraging or original enough to stay at a bad game,” Brown said.

Even though “Sweet Caroline” might not be able to salvage a blowout game, it still introduces a lot of pride to members of the Panther Pitt, Oakland Zoo and so forth.

“To know that I had a part in something like this, that will continue to go for many years, is something that I am very proud of. I hope that it continues to get Pitt fans going for years to come,” Acierno said.