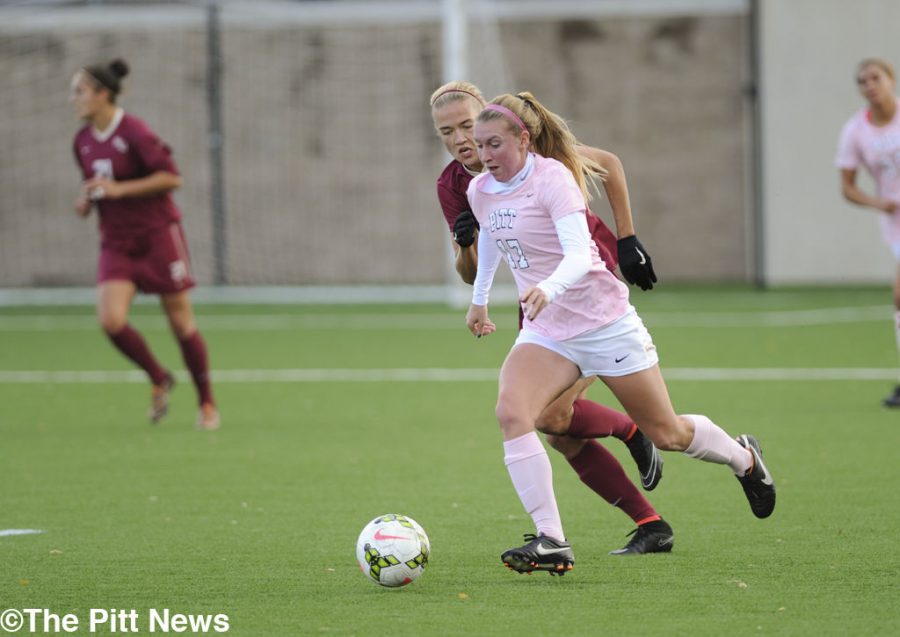 It’s been a challenging season for the Panthers, but the women’s soccer team has taken strides toward future success.

The Pitt women’s soccer team will finish its 2014 season on Saturday, as they travel to Charlottesville, Va. for their final game, taking on the No. 3 Virginia Cavaliers at 7 p.m. at Klöckner Stadium.

With a roster that includes 23 freshmen and sophomores, Pitt (6-11-0, 2-7-0) has managed to accomplish more this season than it has in head coach Greg Miller’s three-year tenure as head coach.

Among their achievements, the Panthers won their first two ACC games in program history this season on their way to eclipsing their total of four wins in 2013.

Miller’s optimism about this season will only grow once he has a chance to reflect further upon the work his team has done this year.

“I definitely think we’ve made significant progress,” Miller said. “Certainly, as a coach, you’d like to see more and have back some moments where things could’ve been better, but I feel pretty good about the progress we’ve made and how our young people have grown and matured in some respects.”

With 14 freshmen playing for the team this year, Pitt expected to have growing pains, but those pains should result in a much better squad by next season.

Sophomore co-captain Siobhan McDonough is one of the 25 Panthers that will return for Miller next season to keep the core intact, and she expects nothing but improvement.

“I am very optimistic about next year’s team,” McDonough said. “I think we have definitely made strides and progress and have given ourselves a chance in every game, which is more than we could say last year. With some added talent and more time to train as a team, I think we’ll be even better.”

Senior co-captain Jackie Poucel, who will play her final game in a Pitt uniform on Saturday, has shown confidence in her young teammates all season and will continue to do so after she’s moved on.

“I can only see the program continuing to build and grow and, hopefully, keep bringing in high-caliber players that want to win and want to work,” Poucel said. “I think this is definitely a team that will make the ACC tournament and the NCAA tournament in the future.”

Regardless of the outcome of Saturday’s contest against Virginia (16-1-0, 8-1-0), Pitt has no chance to make any postseason tournament. Only the top four teams in the conference make the ACC tournament (Pitt sits in 12th place as of now), and the Panthers’ sub-.500 record suggests that their chances of making the big dance are slim to none.

But Miller said the Panthers aren’t done yet. They have one game remaining, and it is a good opportunity to make some noise before Pitt heads home for the year.

“I’d like us to just compete and act like we have something to play for,” Miller said of his Panthers. “Even though we haven’t necessarily gotten the results that we’ve wanted doesn’t mean that we can’t go into this [Virginia] game and at least give ourselves a fighting chance.”

The Cavaliers are a very solid offensive team, with numerous weapons on their front lines. It will be difficult for Pitt to keep an eye on each of their threats, but they will have to be organized on defense – a problem they’ve had all season – and play composed soccer that will allow them to counter Virginia’s offensive charge.

A win over Virginia on the road would easily be the biggest win of Miller’s tenure as head coach at Pitt. If the team wins, the Pitt women’s soccer program will enter the offseason with more confidence than it’s ever had, while also gaining some respect around the nation heading into 2015.