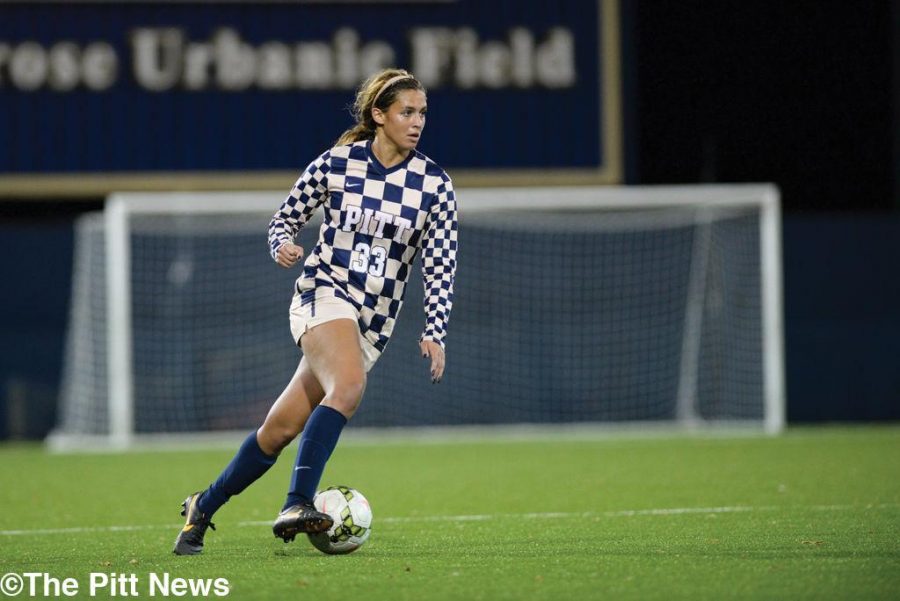 Sunday marked the final time Pitt seniors Jackie Poucel, Riliegh McHugh and Alex Charlebois would play in front of their home fans as the Pitt women’s soccer team hosted its last home contest of the 2014 season.

Head coach Greg Miller has relied on his seniors to be leaders all season long. He has watched them grow throughout their time at Pitt, and he will now watch them graduate from his program.

“Those kids have helped lay a foundation for the future,” Miller said. “The things that they’ve gone through in their three years have been difficult but have certainly helped this team this year be more successful … I told them I was really proud of them, and their legacy will continue on.”

Before the game, Poucel, Charlebois and McHugh were joined on the field by their families as they were each presented with framed jerseys along with pictures of some of their best moments in their respective Pitt careers.

However, for the co-captain Poucel, there was no time for emotion once the game kicked off.

“It was really emotional at first when we were getting [our names] called out there,” Poucel said. “But then it’s just business as usual. You have to play, and you can’t really let it overwhelm you in any way.”

The match had a familiar start for the Panthers.

As has been the story for many games this season, early defensive struggles and an inability to keep possession of the ball proved to be the difference in the opening minutes of the match.

In just the third minute of the contest, Clemson sophomore midfielder Emily Byorth fired a shot from the top of the arc and into the upper right corner of the net, past the leaping Panther goalkeeper Taylor Francis, to put the Tigers up 1-0.

The Panthers seemingly spent almost the entirety of the first half playing defense against the organized offensive attack of the Tigers.

But the second half was much more productive for Pitt.

The Panthers played physical soccer and showed some composure with the ball, which allowed them to hold Clemson to only seven shots in the second half, as opposed to the 18 they racked up in the first half.

In the 54th minute, McHugh fired a shot from 45 yards out over the head of Clemson’s sophomore goalkeeper Kailen Sheridan and into the back of the net to tie the score at one on her first goal of the season.

McHugh had a plan going into the game to make her Senior Day a little more special.

“We do this thing before games where we sit in a circle in the locker room, and we go around and say one thing we’re going to do in the game,” McHugh said. “I’m a defender, but I was like, ‘I don’t care — I’m scoring today.’ But honestly, [after the goal], I think my teammates were more excited than me because I couldn’t believe it went in.”

But the Tigers responded immediately, and just 30 seconds later, Clemson mounted its attack once again. Senior midfielder Katelyn Reeve sent a cross in the box to sophomore forward Catrina Atanda, who bootedthe ball past Francis for a goal to put the Tigers up 2-1.

Pitt’s lack of experience was on display in that moment and showed how this season has gone for Miller and his Panthers.

The Panthers will play their final game of the season on Saturday when they head to Charlottesville, Va. to take on the Virginia Cavaliers.