Panthers shut out in loss to third straight ranked team 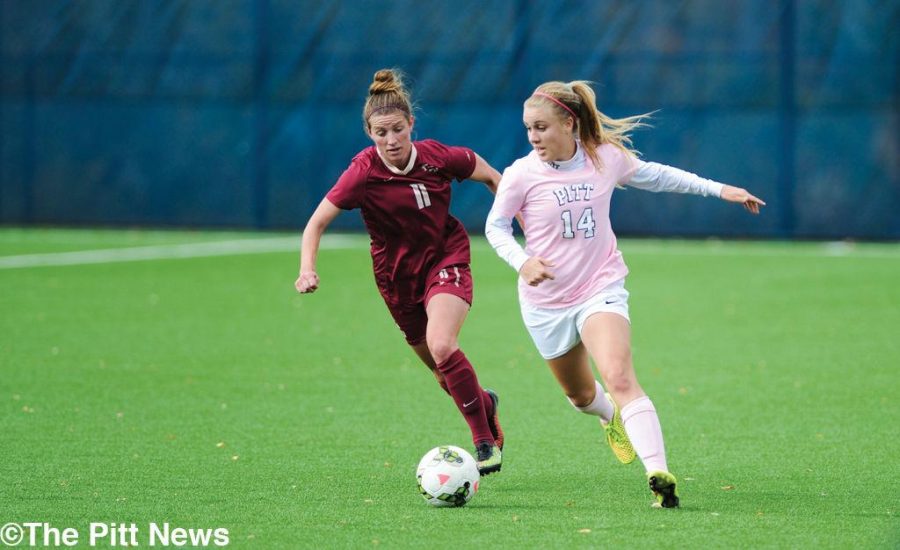 The Pitt women’s soccer team must be relieved the weekend is over.

The Panthers completed a three-game stretch of matches against nationally ranked ACC opponents Saturday afternoon. They lost to No. 2 Florida State 3-0 at Ambrose Urbanic Field.

One bright spot for Pitt was the team’s most consistent player thus far this season, sophomore goalkeeper Taylor Francis.

Although she gave up three goals in this match, Francis faced 19 shots on goal on her way to tying the school record for saves in a single game with 16 — increasing her ACC-leading season saves total to 78 on the year.

Head coach Greg Miller said Francis is consistently performing well for the Panthers and without her, the Florida State result may have been worse.

“She has done way more than the call of duty to try and keep us in games,” Miller said. “Do you expect that out of every player, to go above and beyond the call of duty? Sure, but she’s proven that game in and game out … Any time you have a good goalkeeper, you’ve got a chance, and we certainly have that in Taylor Francis right now.”

Pitt faced pressure in the defensive zone all afternoon against the Seminoles, and the defensive back line had a hard time dealing with it.

But it wasn’t just the Panthers’ defensive effort that caused this loss.

“[Florida State] had their entire team in our half of the field, and, with a team as good as them, we sat in and tried to get all of our numbers behind the ball,” senior co-captain Jackie Poucel said. “Although we had kept some possession, we lacked the connection in the final third on transition.”

Miller said giving the opponent time in possession to figure out the defense makes it difficult to stop the offense.

Pitt knew it was facing a highly ranked opponent and leaving the game with a win was unlikely. Poucel said this helped the team move on to focus on the next contest.

“It’s not as big of a deal as other games because we know how good they are and it could have been worse,” Poucel said. “It’s not a loss that crushes us, especially knowing we have two games this coming weekend that we can definitely win.”

This loss drops the Panthers to 12th in the ACC standings, placing them just above the winless Miami Hurricanes and NC State Wolfpack.

One positive performance in the game came from freshman Hanna Hannesdottir. The freshman has shown maturity on the field this season — a maturity that continues as the season winds down.

“We have three more games left, so where we sit in the conference right now doesn’t mean anything until we are finished,” she said. “We lost [Saturday], but it’s over and we have to focus on the next game. We’ll just keep getting stronger as a team every day like we have been all year.”

Miller said while he has started to emphasize the team’s ACC rank, he also wants to focus on improvement within the team.

“We always talk about controlling what we can control. We don’t have any ability to affect other results, so where we finish in the standings has a lot to do with what we do,” Miller said. “It would be great to play games and sit back and hope that other teams lose … but at the end of the day, you have to be responsible for your own result.”

Pitt next faces Louisville at home at Ambrose Urbanic Field on Thursday at 7 p.m.