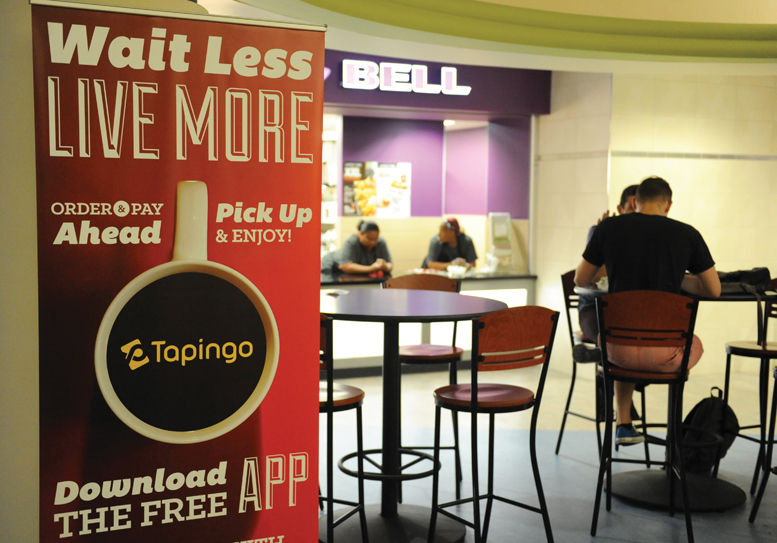 The University recently began using Tapingo this semester, an app that allows students to order and pay for food ahead of time, and then pick it up at campus dining locations. The students using the app pay the same price for food that they would have after standing in line.

Tapingo claims that college students wait in line for food for 15 minutes per day, which adds up to four hours per week and eight days per year. With its new partnership, Pitt is looking to cut down on these wait times.

According to Pitt spokesperson John Fedele, the aim is student satisfaction.

“We know our students’ time is valuable, and efficiency is a priority. With this application, we were able to meet these objectives for our students,” Fedele said in an email.

The company launched the app in January 2012 and now operates at more than 50 campuses, according to Gloria Lee, a leader of its growth team.

Tapingo was first tested in Israel and then brought to San Francisco and applied to universities including New York University, University of Southern California and University of Arizonia.

“Some of our founders actually met in Israel. They first got the idea when they were out there,” Lee said.

Tapingo intends to benefit students as well as on-campus operations. For students, the appeal is reduced time waiting to eat at dining facilities.

“We’re trying to decrease the time that they’re waiting in line. We want them to be more in control of their schedule,” Lee said.

Tapingo also takes workload off of cashiers at campus dining locations because students pay with their student ID or credit card through the application prior to picking it up. With a student ID, users can pay with either dining dollars or Panther Funds. Using the app does not, however, disrupt the normal routine of the food service locations, Lee said.

“We fit in directly in their operational flow. The receipt prints out, and it fits into what they’re normally doing,” Lee said.

Tapingo works closely with the dining services at each university — in Pitt’s case, Sodexo — to launch the service. Tapingo sends staff to evaluate the optimal flow for the app to not alter the current system at the dining locations. A technology team also works to set up the hardware needed to accommodate the app.

With each order, Tapingo charges the University or the food service operator a service fee.

Fedele said the University and Sodexo are sharing the fee for Tapingo. “There is fee structure that has been worked out with Tapingo based on the monthly usage of the program,” Fedele said in an email.

Pitt’s nine coffee carts, in particular, may function more efficiently, Lee said, because the app has been successful with coffee venues — mobbed by caffeine-seeking students — in the past.

New York University began using Tapingo last year, and one student, Valerie Nelson, a junior in the College of Arts and Sciences, used the app for the campus Dunkin’ Donuts in Union Square.

According to Nelson, the Dunkin Donuts is a popular eatery for NYU students and non-students, and is busy throughout the morning.

While ordering beverages or breakfast sandwiches makes the users’ Dunkin’ Donuts experience more convenient, Nelson said people waiting in the traditional line experienced more delays because the employees were busy making orders submitted through Tapingo. Also, some people placed orders from Tapingo and then never came to pick them up.

“So, basically, Tapingo is awesome for students using it but really throws off the balance of the dining location,” Nelson said in an email.

Greg Casey, a freshman business major at Pitt, is taking advantage of Tapingo’s arrival at Pitt.

Casey uses Tapingo daily for lunch. So far, he’s used the app on his Android phone for Taco Bell, Sub Connection and Einstein Bros. Bagels and has been pleased with the service at each location.

He downloaded the app after his friend saw an advertisement in the William Pitt Union and was particularly impressed with the app’s ability to allow for the customization of orders.

“I think it is an extremely easy to use app that has a great access to most of the restaurants around campus,” Casey said.