Needing to regain its edge, Pitt readies for VCU 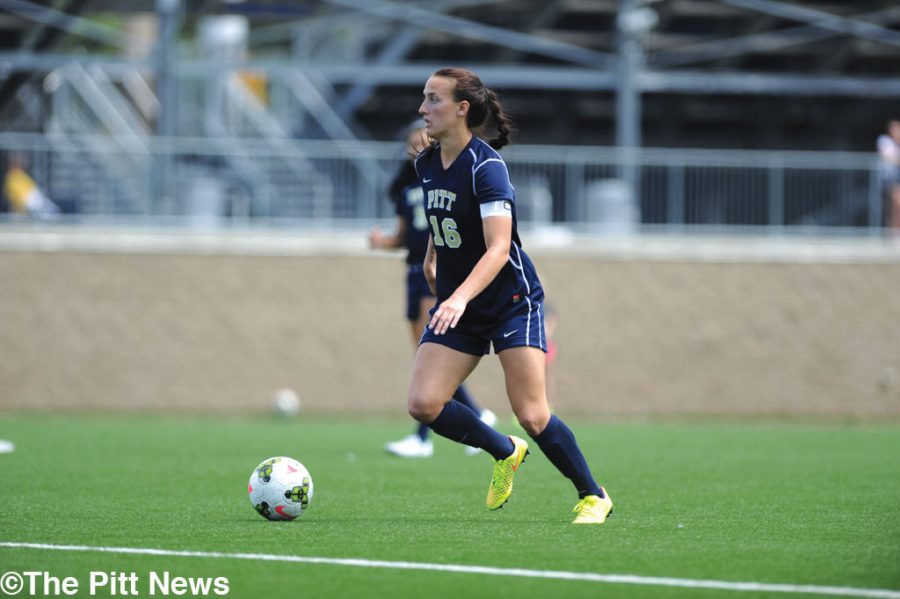 As the Panthers enter their eighth game of the 2014 season, head coach Greg Miller is ready to stop blaming his team’s youth for Pitt’s mistakes.

Miller shuffled a few of his young players in and out of the starting lineup Sunday in Pitt’s loss to La Salle, and similar swapping is likely to occur this Friday at Ambrose Urbanic Field at the Petersen Sports Complex when the Panthers (4-3) take on Virginia Commonwealth University at 7 p.m.

Miller removed freshman forward Taylor Pryce and midfielder Ashley Moreira from the starting lineup against La Salle in favor of veteran forward Alex Charlebois, a redshirt senior, and midfielder Hanna Hannesdottir to send a message. The change resonates with Miller’s desire for his players to be more aggressive in all phases of the game, and the shuffling of the lineup just might give him that result in the long run.

“Some of them are more comfortable, some are more apprehensive or just coasting along trying to find out what their role is and how much more they can take on,” Miller said of his first-year players. “We’ve tried to harp on them that they have the green light to take risks and get after it a little more. We’re seven games into the season, we can’t use the excuse that we’re inexperienced anymore.”

Hannesdottir, a freshman, has made an impact through the first seven games this season and quickly earned herself a starting position. She has had three assists and one goal so far, and has earned the respect of her team.

“Hanna did a nice job of seizing the opportunity [to start on Sunday] and right now I think she’s our best soccer player,” Miller said. “She’s consistently giving us good possessions and good attacking and she’s getting more and more comfortable in her environment.”

Hannesdottir will start again on Friday against the Rams (1-3-2), where Miller hopes she will continue to contribute more of the same type of play she’s shown so far. The praise didn’t stop with Miller — captain Jackie Poucel agreed with him.

“Hanna has been great,” Poucel said. “She has always been a hard worker and is extremely smart on the ball. She’s fully capable, especially when she’s in the attacking mid position, to win games for us.”

Those younger players who are giving the proper effort are the ones who rise to the top of the depth chart and receive notice from their older teammates and the coaching staff. Those who are not are buried on the bench, and they need to respond before it is too late for them to make an impression on Miller.

“The only thing standing in [the freshmen’s] way is confidence,” Poucel said. “They need to believe in themselves and take risks. No one can ever be disappointed in a player that just works.”

The Panthers had Monday off to recover from the weekend and will have had three full days of practice to prepare for VCU. Tuesday involved some technical work on offense, while Wednesday’s practice consisted of defensive work — mainly the organization of the back line. Thursday will be devoted to set plays, specifically corner kicks and free kicks, so the players don’t do anything too strenuous the day before a game.

Tactically, the Panthers are working to improve their execution and attacking in the final third of the field, which is the space stretching approximately 35 yards from the opponent’s goal.

“We’ve got to be a little bit more dynamic and a little bit more sophisticated with the way we’re getting behind teams and creating scoring chances,” Miller said. “We have to be more settled than we were over the weekend.”

As far as preparation for VCU specifically, the Panthers have not done much critical studying on their tactics but are approaching the game with an aggressive mindset. This is the first weekend of the season where Pitt will not have to prepare for two games, so the Panthers are excited about having a full week of practice and training to prepare for only one contest.

“We have been less focused on the specifics of VCU’s play and more concerned with fixing and growing in certain aspects of our game,” sophomore captain and forward Siobhan McDonough said. “I am sure before the game we will go over VCU in more detail, but so far our focus has been on developing overall as a team and individuals.”

Although the players aren’t briefed on VCU quite yet, Miller has already noticed some things about the Rams for which he must prepare his team.

“They have a few kids up front that are very fast, so we have to plan for that kind of speed,” Miller said. “And then they have a dynamic midfield that’s very athletic that can ride you and build a play from that part of the field.”

Pitt’s week of practice also emphasized the importance of not playing with a “reactionary” style, Miller said. Instead of waiting for plays to unfold in front of them, Miller wants his players to become more proactive in anticipating plays on the field. This focuses on small details within the game and, once again, aggression to be able to prevent a quick VCU lineup from getting behind their defensive back line.

“We’re holding people more accountable for all of the little things they’re doing,” Miller said. “Are people slide tackling or winning 50/50 balls out of the air to make us more engaged in what we’re doing so that we can get good possessions and also prevent shots?”

With Friday marking the Panthers’ final game before ACC play begins, the team is eager for a win to rebound from its somewhat lackluster performance on Sunday. Whether it is their youth, fatigue or being on the road, Miller has ruled out excuses and expects his team to perform at a high level against VCU.