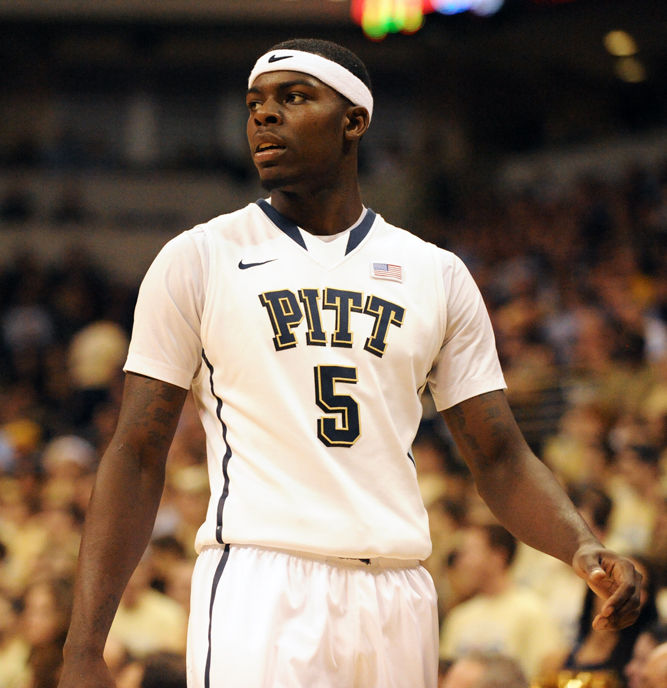 Durand Johnson penetrated the right side of the lane, heaved a running jumper, got fouled and landed awkwardly on his right leg. He cringed for a minute, clutching his knee on the floor, then stood up and sank two free throws.

Pitt fans inside the Petersen Events Center sighed in relief. Johnson was the team’s biggest scoring threat off the bench. His two points extended the Panthers’ lead over Wake Forest to 19 with 5:30 remaining, putting the Jan. 11 game well out of hand. He was subbed out and wouldn’t return. Many fans headed for the exits.

The next day, news broke that the redshirt sophomore had actually torn his ACL and meniscus on the play — an announcement surprising to all.

Seven months have passed since Johnson went under the knife to repair his injuries and he has stayed busy with recovery during that time.

Beltz works with the team daily, and he sometimes does two-a-day sessions with Johnson.

As a conditioning coach, Beltz’s contributions include adding or subtracting body mass as directed and training a player’s injured body parts to work properly again. He coordinates with sports nutritionist Leslie Bonci and athletic trainer Tony Salesi to make sure that the players are fit and durable by the fall.

Johnson is slightly ahead of schedule in the recovery process and said he is pain-free. After getting the nod from doctors to move laterally in July, the only aspect of on-court activity from which he remains restricted is physical contact. He went to the Bahamas with his teammates on their preseason tour but didn’t play in any of the scrimmages. Johnson said he should be cleared for physical contact by September.

“They want to nurse me along to make sure there are no setbacks in November by the time the season starts,” Johnson said.

A smooth return is just what Johnson needs to help his chances of receiving significant and immediate minutes.

This season, Pitt welcomes more talent to the small forward position after graduating Lamar Patterson, the Panthers’ leading scorer from last season (17.1 points per game). A slimmed-down Jamel Artis is back after a stout freshman campaign and overpopulation at the power forward position could get him time at the three. Redshirt sophomore Chris Jones will also compete for the position, as well as transfer Sheldon Jeter, who has three years of eligibility remaining. Freshman sharpshooter, 6-foot-7 Cameron Johnson, opened many eyes during summer play and, if he isn’t redshirted, he could see time at the position.

Add Durand Johnson to the mix, and there’s likely to be an odd man or two out.

Durand Johnson says that the past seven months off has given him extra time to add increased dimension to his game.

“Last year, before I went down, I was trying to mix up my game, not just be a spot-up shooter and get out in transition, but also take guys off the dribble, get to the rack, create for me as well as my teammates,” he said. “So this year, coming in, I’m not just looking forward to just spotting up. I will be getting out in transition but I want to get the ball off the rebound, and I’m going.”

One of basketball’s great features is that a player just needs a ball to practice. While his teammates are on the floor competing in contact drills, Johnson walks the sidelines, ball in hand. He does drills on his own. For one drill, Johnson ties two balls in plastic Walgreens bags to “pound, pound, pound” them, he said, pretending to simultaneously beat two balls into the hardwood.

It doesn’t stop there. He also goes up and down the court doing this exercise, or in-and-out dribbles.

“Because I know ball handling is going to be the key,” he said.

Beltz leaves the skill work up to the coaching staff but, according to Johnson, Beltz was impressed to hear that he was dunking the ball again.

“[He is] doing as much as he can within his limitations,” Beltz said.

Johnson will have to cut some of the weight he gained while he was barred from doing many running activities. He said he weighed 215 pounds, up from 197 pounds a year ago.

Pitt head coach Jamie Dixon said that Johnson has a long way to go before getting penned into a spot in the rotation. At the time of his injury, Johnson was second on the team with 22 made 3-pointers.

“We’ve got to get him out to practice first. No roles have been defined yet,” Dixon said.

“I just want to get back and show everybody that I missed the game,” he said.