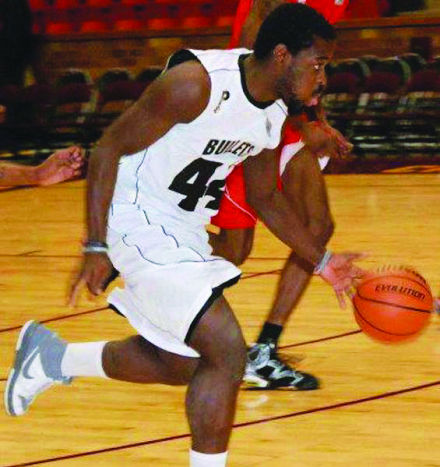 Culbreath didn’t play for Pitt. He didn’t even play for his high school team in Augusta, Ga., after he failed to make the last cut. An unknown player, he didn’t receive any athletic scholarships or offers to play in college and attended Pitt for academic reasons. He graduated this past year with a dual degree in astronomy and physics.

But these aren’t the things that define Culbreath, at least not to himself. To him, success could only be defined by the fruition of one goal: to play professional basketball.

“I’ve been dreaming of playing in the NBA since I was 13 years old,” he said. “I learned from my family that if you want something, you have to work for it and don’t stop until you feel it isn’t going to happen.”

Although Culbreath didn’t play for his high school team, he participated in a recreational league until he graduated. Once at Pitt, he played pickup games regularly at Trees Hall.

“I never missed a game when he was here,” Rosalind Culbreath-Jenkins, Culbreath’s mother, said. “Other people would stop watching their children to watch Jared.”

As the mother of six children, Rosalind found it difficult to give her attention to all of their activities. Still, she managed to keep them motivated. One year, if one kid’s team won a game, she would take the whole family out to dinner.

“Jared was breaking me, but it was worth it,” she said.

Once he arrived at Pitt, Culbreath was determined to make his goal a reality. He attended the National Basketball Association Development League (D-League) tryouts in Houston and went to several other basketball showcases in early 2012.

It wasn’t until his last showcase in Columbus, Ohio, that Culbreath got the opportunity he had been hoping for.

“I finally sat down with the [then] owner of the Ohio Valley Basketball League,” he said. “He excitedly told me there was a team in Pittsburgh.”

Culbreath was invited to tryout for the Pittsburgh Bullets in June 2012. The team, created in 2011, is a member of the North American Basketball Development Leagues Association (NABDLA). Until 2013, the league was known as the Ohio Valley Basketball League.

In October, Culbreath was informed he had made the team.

“It gave me an opportunity to get one step closer to my dream,” he said.

Most players in the league are in their early 20s. The league currently has teams in the Northeast and Midwest and is expanding.

During the fall season, which begins in October, the Bullets play home games at Youthplaces, 711 West Commons St., and travel to several large markets in the Northeast and Midwest, such as New York City, Philadelphia and Indianapolis. Management also sets players up with an agent from Aspire Sports Management.

Later in 2012, Culbreath had another opportunity as he attempted to walk onto the Pitt basketball team.

“The experience was a bit nerve-wracking because I hadn’t had much luck with school teams,” Culbreath said. “The players were all pretty decent for the most part and you could tell the coaches were all business.”

After making it through several rounds of cuts, he recalled a conversation he had with an assistant coach after one of the drills.

“He was pretty straightforward and asked me if I thought I had a chance to make the team. I confidently said ‘Whatever needs to be done, I’ll do it.’”

After a few hours, only Culbreath and five others were left. The competition increased and the drills had an added level of intensity.

“It was very physical, with lots of running and conditioning drills,” Culbreath said. “I felt like there may have been one other guy that had a chance (besides me).”

In the end, none of the players who tried out were selected.

After being told they weren’t good enough to play for their school, even in a walk-on capacity, some players might become angry or question their abilities, but just like he had after failing to make his high school team, Culbreath took a different approach.

“I was still confident as always,” he said. “It motivated me even harder.”

In the two years since his tryout with the Panthers, Culbreath has had to balance schoolwork, his personal life and the Bullets. He never considered transferring to another school to try and play basketball.

“I already started up a life here,” he said. “There was no point.”

Culbreath, along with most players in the BDL, makes roughly $500 per season. In order to survive and continue to pursue his dream, he’s had to work a second job. Currently, he’s a waiter at Olive Garden.

In his two seasons with the team, the Bullets have seen steady improvement, having a greater winning percentage since he joined. While his stats may not get most fans attention, it’s his defense, leadership and ball-handling that make Culbreath an important member of the team, according to owner Marcus Robinson.

“Jared is a tough, physical player on the basketball court,” Robinson said. “His ability to drive the ball from end to end and finish in traffic is his best attribute.”

Confidence on the basketball court has never been an issue for Culbreath. Whether he’s playing for the Bullets or trying out for the D-League, his swagger and bravado on the court is unquestionable.

“I got talent. It just needs to be guided,” Culbreath said. “My constant progress is proof that I can get there.”