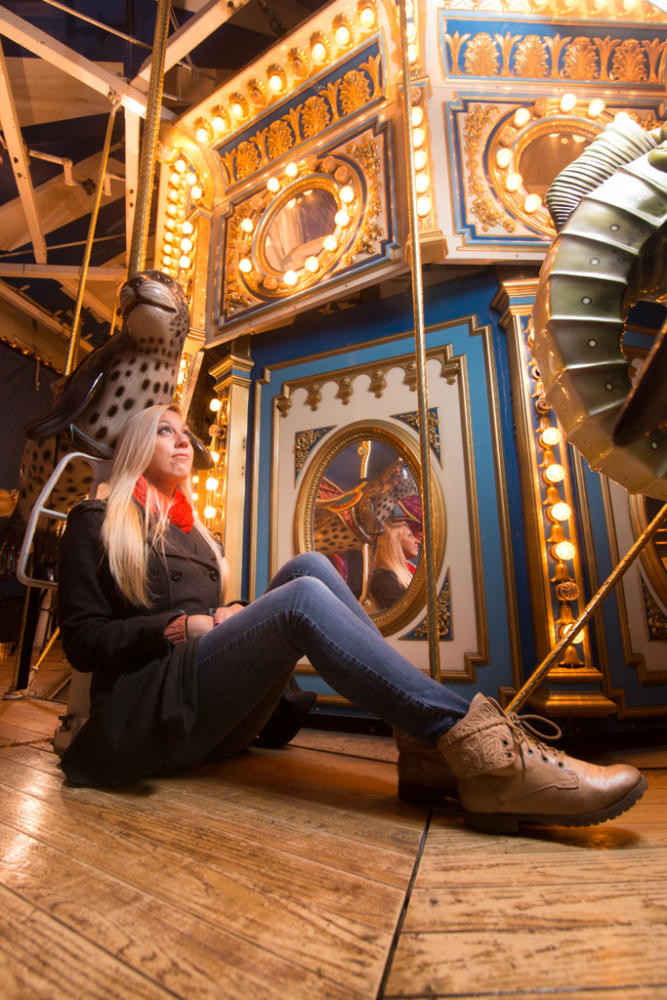 Vicki Collier’s professional career has been going in circles — not that she minds.

For the past five years, Collier, a biology major with a chemistry minor, has spent her summers operating the Oakland carousel in Schenley Plaza — which, as it turns out, means a little more than pushing a button. In 2006, PNC donated the curious campus fixture to the park, which runs from mid-April to mid-October.

As the carousel’s longest returning employee, Collier took The Pitt News on a spin through her career, from the time Tom Cruise visited to how she feels about graduating, and — maybe — leaving the job for good.

The Pitt News: I think you have one of the coolest jobs on campus.  How did you get it?

Vicki Collier: I started when I was still in high school. I went to high school 15, 20 minutes away [in West Mifflin], and I got the job because my mom works for Pittsburgh Parks Conservancy. They were just looking for people to work the carousel [in 2010] because it was actually hard to find people to do it at that point. No one really knew how to apply or anything. No one really thought of it as a job. 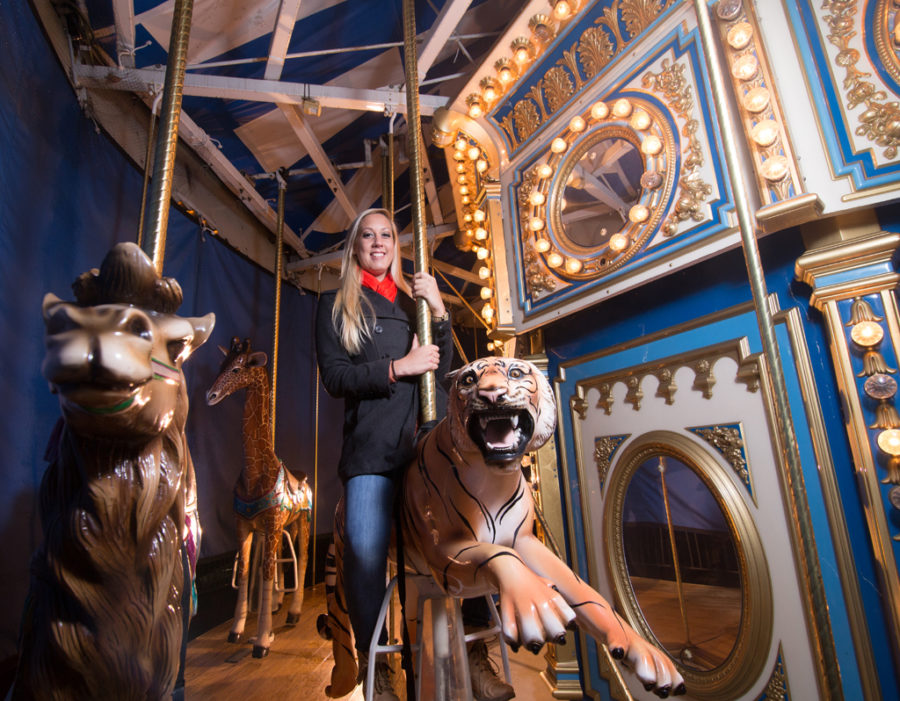 TPN: Does the job ever get boring?

VC: It gets really boring. That’s the worst part. It’s gotten a lot more busy over the years. Like when I first started, there would be maybe a few people per day — that was pretty rough. When I’m bored I can just get on my laptop and do whatever, watch Netflix. I made friends with a lot of people that work at Schenley Plaza, so they come visit me whenever they’re bored too — park rangers, the maintenance people, landscaping people, security guards and the overall park supervisor. I’ve been there so long.

TPN: What are your specific duties at the carousel? 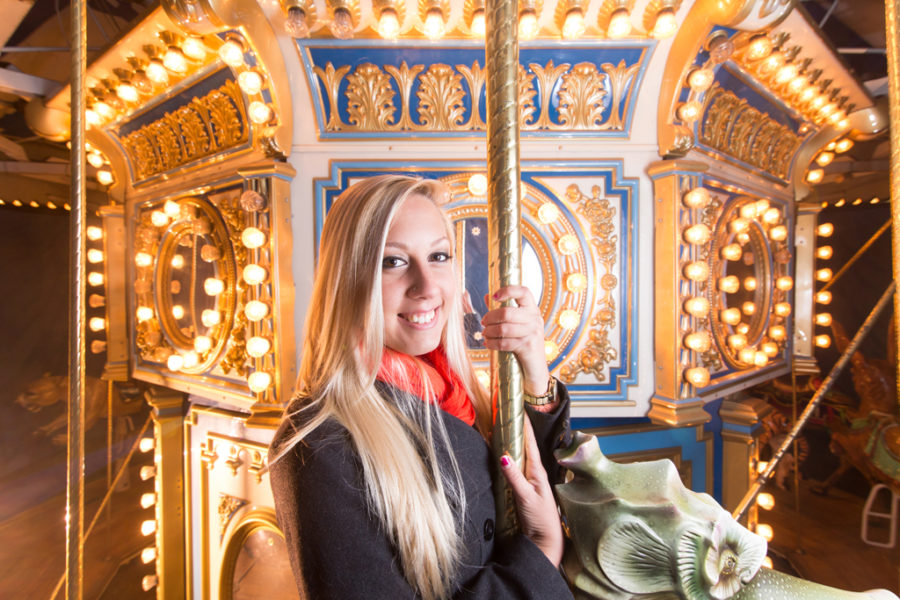 VC: Basically when I first get to work, I have to open up the carousel, which, whenever it’s closed it has that big blue tarp around it, so I have to get out the ladder and roll up the tarp. The ladder is like 10 feet tall, and usually I get someone to help me. Someone usually turns the carousel on while I’m up on the ladder, and you just have to pull all the tarp up, and there’s these little bungee cords that wrap around [the carousel] that you hook on the other side. So it’s harder than you would think.

You have to do safety inspection first — basically when kids or customers come, they have to pay a token to get on, which is $1.25, [and I] help them up if they need help, making sure they’re buckled in and just let them go for the ride. All I have to do is push a button to make it go.

TPN: Why do you keep coming back to this job?

VC: It’s a great job. I mean it’s super convenient — I can walk to work, it takes like two minutes, and it’s probably, for one, the easiest job. I just press a button, basically. It’s [also] one of the most fun jobs. Getting to see kids be so happy to go round in circles is just awesome. Everyone in [Schenley Park] is so happy — that’s the best part.

TPN: Do you get a lot of adults on the carousel?

VC: It’s mostly kids, but we definitely get some adults. College kids, that happens occasionally, but I don’t like when college kids come because they don’t respect the rules and make me yell at them. They hop on and off the animals and run around and try to switch animals or try to stand up on them — so they’re not my favorite.

Every day college kids usually try to ride it, and then [they realize] it’s not free, and they’re like, “Never mind.” So usually about two a day. They’re too cheap.

TPN: How does this job compare to any other jobs you’ve had?

VC: It’s so much better [than other jobs]. I’ve worked at a little deli, and basically [at] the other jobs I’ve worked, my bosses were really awful. [They were] really mean and not understanding and made working there just not enjoyable whatsoever. At the carousel, I don’t necessarily have a boss there. There’s the park supervisor, but they’re not the ones who employ me. So I’m pretty much free to do what I want there, and it’s so laid back. It also pays more than minimum wage, which is nice.

TPN: When you started this job, did you think you’d be doing it for six years?

VC: Oh my God, no. Every year I told myself I wouldn’t go back because it’s not really doing me any favors for my resumé. But it’s just the easiest job, how could you give it up?

TPN: What’s the most interesting thing that’s happened over the six years you’ve worked at the carousel?

VC: One of the funniest days was when I got this lady who came to ride the carousel, and she had a baby doll with her. It was in a stroller and everything, and she came up to me and said, “Here’s a token for my baby.” I was like, “Should I take this?” I just took it, and she literally put her baby doll on the carousel — put the seatbelt on and everything. She didn’t ride it herself, just the baby doll. [The doll] rode just once, and when [it was over], she was like, “Oh my gosh, she loved it so much. Thank you.” That was probably three summers ago — she hasn’t been back.

There’s been a lot of memorable passengers. For some reason Schenley Plaza has the most diverse people ever, just coming there. Tom Cruise rode it. Tom Cruise was here recording a movie, but he was with his daughter Suri. They had someone just showing them around Pittsburgh, and for some reason they stopped at the carousel. I guess that’s an important part of Pittsburgh. [Cruise] rode the eagle, and Suri rode the dragon. [He] didn’t look entertained, he just had a straight face with his sunglasses on.

The day after Tom Cruise rode the eagle, the eagle broke.

TPN: Have there been any other celebrity visitors while you’ve been working?

VC: No, I don’t think so. But I know the carousel made it into a book, “Good Night Pittsburgh,” so a lot of people go visit the carousel because of that. They want to visit all the places in the book.

TPN: Do you have a favorite animal on the carousel?

VC: I want to say the dragon. His name is Puff, I think it’s the most appropriate, Puff the Magic Dragon. We only have one horse, so I think that’s kind of nice. Who just wants all horses on a carousel? It’s boring.

TPN: Do all the animals have names?

VC: They do all have names. It’s all donated. The carousel itself is donated by PNC, and then the animals were donated by whoever wanted to donate them [and] they got to name them. They have a little plaque at the bottom [of the animals] saying “adopted by” whoever paid for it.

TPN: Do you ever ride the carousel alone at work?

VC: I can’t, because I have to have my foot on a pedal to make it go, so if someone’s not there it won’t go. It’s a safety mechanism so that you can’t not be attendant to the carousel. You just have to have the pedal down.

TPN: Does the carousel hold a special place in your heart over other parts of campus?

VC: I love it a lot. I love Schenley Plaza as a place because a lot of people don’t appreciate that we have this tiny little park in the middle of our campus — this super nice lawn and the backdrop of the Cathedral. Being there makes you realize how much actually goes into the park. It’s all free [for students], but the Pittsburgh Parks Conservancy [has] to pay for all the flowers and landscaping and maintaining, all the kids’ days and free concerts — no one really appreciates it. They put in a lot of work, and it’s really nice.

TPN: How much longer are you going to work at the carousel?

VC: I graduate this summer, so it’s up in the air whether I’m going to go back this summer. I really told myself for real this time I wouldn’t go back because I need to get a real job, but somehow it always happens that I’m there. So, you never know.