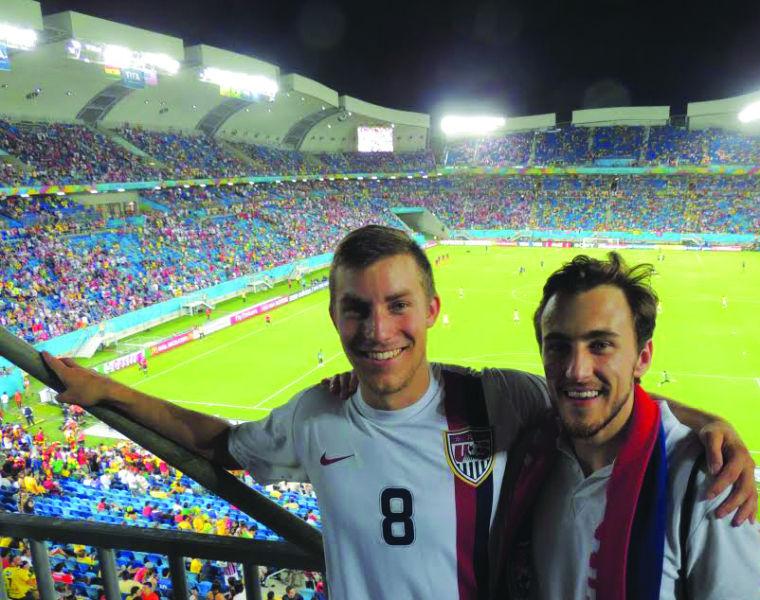 As he watched ESPN’s coverage of the World Cup last week from home, John Bates recalled what his life was like only a short time ago. The network’s aerial coverage of Rio de Janeiro showed Copacabana Beach, the iconic stretch of sand where the channel had its studios for the tournament.

“I was there like two weeks ago. Dave and I played soccer on that beach. Our apartment was a five minute walk from that beach,” Bates said he thought to himself with disbelief.

David Palm has been a friend of Bates’ since the two recent Pitt graduates both lived in Forbes Hall their freshman year. They realized two years ago that the 2014 World Cup would take place the summer they graduated but the discussion went no further.

Then, last fall, Palm — a chemistry, chemical engineering and history and philosophy of science major — studied abroad in Curtiba, Brazil, for a semester. His time there convinced him that attending the World Cup was doable.

Upon returning to campus this January, Palm convinced Bates to go to Brazil in 2014, despite the relative high cost of World Cup matches.

“The more I thought about it, the more I was like, ‘I really gotta do this because it’s gonna be a once in the lifetime sort of thing,’” Bates, a mechanical engineering and philosophy major, said.

Bates and Palm applied for tickets through the FIFA lottery and found out they received them a month later. They were lucky — more than 3.5 million ticket requests were made during that phase by half a million people and they only put in a request for one game: United States vs. Ghana on June 16 in Natal.

According to FIFA, Americans bought roughly 200,000 tickets — the most World Cup tickets of any country besides the hosts. Bates and Palm saw evidence of this throughout Brazil, where they spent about three weeks.

“It was really amazing to see. Every time we walked on the streets, we’d see someone wearing red, white and blue and you’d offer a friendly U-S-A chant to them and they’d respond.” Palm said.

While in Brazil, Palm served as the de facto tour guide since he knew Portuguese from his study abroad experience. Bates, who took Spanish in high school, could understand some of written Portuguese but was lost when people spoke it. Apart from soccer, the two saw some famous Brazilian attractions including the statue of Christ the Redeemer and Sugarloaf Mountain in Rio.

Bates’ 23rd birthday fell on the day before the game. He and Palm attended a party for American fans hosted by the American Outlaws, the main group of United States supporters, in Natal. It was a good preview for the raucous atmosphere the next day, as groups of both Ghanaian and American fans paraded through the streets.

Both sets of fans knew what was at stake. In the last two World Cups, Ghana beat the United States to end its chances of advancing. Winning or tying a team’s first game of the tournament also historically bodes well for a team’s performance the rest of the way.

Once inside the stadium, Bates and Palm took in the scene — players warmed up under the glow of floodlights and clusters of fans dotted the stands. Bates had never seen the national team play before. A professional game in Italy was his only previous professional soccer experience.

Bates and Palm were in for a shock. The United States kicked off and began to play forward toward where the friends were sitting, high up in a corner section, when suddenly, American forward and captain Clint Dempsey juked past a defender on the edge of the box and scored. Half a minute had passed from the first whistle — Bates and Palm witnessed the fifth-fastest goal in World Cup history.

It was so improbable, they figured there had to be a catch.

“There’s no way we scored this early. It’s gotta be offsides or there’s got to be a foul or something,” Bates said.

“We had to check the scoreboard when we looked back to the field of play to make sure they had actually counted a goal. It was that unbelievable,” Palm added.

There was more craziness in store for the fans. Ghana equalized in the 82nd minute after having controlled much of the game. Little time was left for the U.S. team to respond. But it did.

Substitute Graham Zusi lined up to take a corner kick at the far end of the stadium. Everyone who was rooting for the Americans realized the importance of this set piece.

“We came to life at that point. We knew that we needed those three points. We needed another goal,” Palm said. “Seven Nation Army” by The White Stripes began to echo around the stadium.

Zusi served the ball in and German-American defender John Anthony Brooks got his head to it, sending it bouncing off the ground and into the back of the net.

“I barely saw the celebration of our team because I was busy tackling everyone and cheering with all the American fans around, just going absolutely nuts.” Palm said.

The United States would hold on to win, 2-1.

“To be in that country, in that stadium and a game as big as that. To see it all unfold [was] one of the coolest days of my life, certainly,” Palm said.