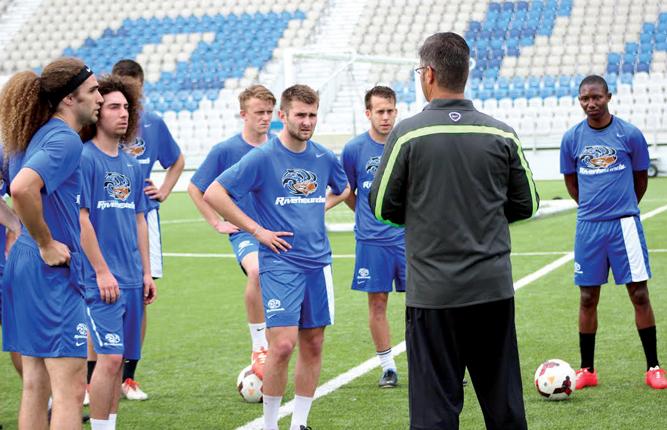 While most soccer fans have their eyes fixed on Brazil during the World Cup this month, three Pitt soccer players have spent their summer playing with other aspiring professionals and local collegiate talent right here in Pittsburgh.

Attacking players Romeo Charron and Ryan Myers, as well as goalkeeper Dan Lynd, are members of the Pittsburgh Riverhounds U23 team in the Premier Development League, which serves as a training system for teams in the United Soccer League, the third tier of professional soccer in America. Founded in 1995, the PDL is widely considered the best men’s amateur soccer league in the United States.

This is the first year the Riverhounds franchise — founded in 1999 — has fielded a PDL side.

The Riverhounds PDL team has a 26-person roster  that  includes  12 players from universities in the Pittsburgh area, including Pitt, Robert Morris, Point Park, Duquesne and Carnegie Mellon.

“The team was formed to bridge the gap between our youth academy and pro team to create a pyramid structure, with the pro team on top and youth programs underneath,” Riverhounds General Manager Jon Rotz said.

At present, the team is 1-5-1 and occupies last place in its division. The season, which began in late May, goes until late July.

Rotz added that he sees a lot of promise in the three Pitt players, citing their professionalism in training and games since making the roster.

Lynd — who found out about the opportunity from his position coach at Pitt, Riverhounds goalkeeper Hunter Gilstrap — will likely be the Panthers’ top choice in between the posts this season after starting 14 games as a sophomore.

“I know I wanted to play PDL because it’s a very high level,” Lynd, a junior, said. “Training every day allows me to work on every part of my game and will help me stay sharp for the fall season at Pitt.”

Lynd’s short-term goal is to improve for the fall but like most players on the Riverhounds PDL team, he has an eye toward playing professionally after he graduates.

“It’s a benefit to play under a professional team because it gives you an opportunity to show your skills to a pro staff and gives you a realistic chance to play professionally,” he said.

Lynd, Charron and Myers look to lead the Panthers to a better season than that of 2013, in which the team finished the season winless in ACC play and had a 1-11-4 record overall.

The Panthers struggled to score goals last season and added experience against top-notch players could provide Myers and Charron the confidence they need to consistently score goals and create opportunities in the upcoming season.

“Hopefully I’m able to instill some of the strong training habits I’ve developed through playing in the PDL to help our guys have a better mental state when entering the fall season and ACC schedule,” Myers said.

A rising redshirt junior, he played in all 16 games for the Panthers last season and finished with two goals and two assists. Comparatively, Charron played in 12 games, registering five shots on goal but failing to score. The team will expect more from him as he enters his sophomore season and gets more acclimated to Pitt’s system.

“As soon as the news of the creation of the PDL team was announced by the Riverhounds, our coaches at Pitt asked us to try out for the team,” Charron said. “The intensity of the PDL league helped improve my athleticism, conditioning and work rate.”

Charron, who was faced with a decision to play in his home country of Switzerland or with Riverhounds PDL, said he was glad he chose to stay in Pittsburgh.

“This opportunity to play at a good level and get ready for fall became more important,” said Charron. “So far it’s been a great experience.”

Almost all of Pitt’s men’s soccer players are participating in offseason training in Pittsburgh or in their respective hometowns as they prepare for next season. The extra practice is something coach Joe Luxbacher values, since beating the best teams in the ACC requires training just as hard as them.

“It is very important for players to train and play in competitive situations over the summer months,” Luxbacher said. “Playing at a competitive level serves to keep players fit, but just as important are the tactical decisions that players must make during the run of play.”

According to NCAA regulations, the team is not allowed to practice regularly together now but players can join other teams or train on their own during the summer months.

With only five players graduating last spring, returning players Lynd, Charron and Myers will take on roles that will require them to perform well and make use of the professional mentality they acquire this summer.

“I already expect a lot from Romeo, Dan and Ryan … they are returning players who have been through an ACC season, realize the level of play and challenge that lies ahead and we look to them for leadership and quality on the field,” Luxbacher said. “I am confident they will rise to the challenge.”

The Panthers start their 2014 season on Aug. 17 with an exhibition game at Saint Francis University.