Intramural sports an easy way to have fun and keep playing 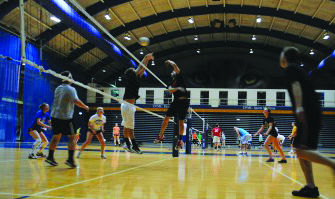 Intramural sports are an easy — and free — way to stay active on campus. The recreational atmosphere provides students an environment to enjoy the game, whatever it is, without being overly competitive.

“Our goal is to service the Pitt community’s fitness needs,” Marilyn Ross, the director of Intramurals and Recreation, said.

Unlike club sports, intramurals take place against other Pitt student teams, and all games happen on campus. This setup leaves the level of commitment up to the students, which offers an element of freedom for players.

“The way [intramurals] are designed allows teams to make it as serious as they want,” said Matt Whiteside, who captains an intramural soccer team during the fall and spring semesters.

“My co-ed team of mostly non-soccer players doesn’t have to worry about ultra-competitive teams and injuries. It’s just a lot of fun.”

Any current undergraduate or graduate student with a valid Pitt ID is eligible to participate on an intramural team. It’s easy: students can round up peers from their floor, building, class or wherever and then hit the fields and start playing. If students struggle to find enough people for a team, they also have the option to sign up individually as “free agents” where they will be assigned by the intramural office to a roster. For new students on campus, signing up as a free agent is a fast and fun way to meet new people who share common interests.

There are a variety of sports to choose from when creating a team.

The Department of Intramurals and Recreation offers three terms of activities: fall (August to November), spring (January to March) and summer (May to July). The sports offered depend on the term. The fall term has basketball, indoor soccer, touch football and volleyball, while the spring term offers the same in addition to Ultimate Frisbee and racquetball. During the summer, for students who stay on campus, the department offers indoor soccer.

Feel like playing more than one sport during the term? Go ahead — Students may participate in more than one sport. The only rule is that students aren’t allowed to play on multiple teams within each sport. For example, a student would not be allowed to be on two different touch football teams but could participate on a touch football and volleyball team.

Game times for each sport generally take place at night, so they do not interfere with students’ class schedules. Pitt’s on campus facilities are available for intramural use, including the Cost Center, Fitzgerald Field House, and Baierl Student Recreation Center located inside the Petersen Events Center.

Registration for intramurals begins at the start of each term and deadlines vary from sport to sport. To make sure prospective teams and teammates don’t not miss a deadline, the Student Affairs website lists registration timelines at the beginning of each term. Prospective players can submit completed applications — no electronic copies are accepted — from Pitt’s Student Affairs website  to room 3034 of the Baeirl Student Recreation Center on the second floor of the Petersen Events Center near the Starbucks kiosk.

“Take advantage of this opportunity you have here at the University,” Bill Wallace, intramural coordinator, said. “Come out, play some sports, get some exercise.”