The Pitt News • May 28, 2014 • https://pittnews.com/article/5786/news/pitt-grad-leverages-pageant-crown-to-spread-personal-message/ 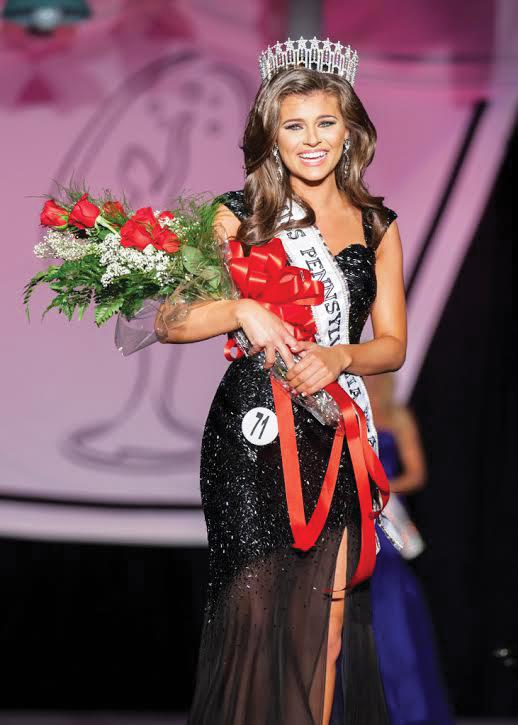 Valerie Gatto gets everything a college girl would want for free: a stylist, a tanning package and a scholarship. She even met one of the stars of “Law & Order: SVU.”

Gatto, a 2012 Pitt graduate with a degree in business administration, is this year’s Miss Pennsylvania USA and will compete for the Miss USA title in Baton Rouge, La., on June 8. Gatto said she expects to win the Miss USA crown because her positive thinking fuels her success in pageants. After pageantry, Gatto has plans to act professionally, but if she’s not successful in acting within five years, she will pursue a master’s degree in business.

Last December at a Steelers home game, Gatto ran into another Pittsburgh native, actress Tamara Tunie, who plays Dr. Melinda Warner on NBC’s “Law & Order: SVU.” The two exchanged contact information, and Gatto said she hopes to work with “SVU” in the future after the Miss USA competition.

As Miss Pennsylvania USA, Gatto received a $45,600 scholarship to Lindenwood University of St. Charles, Mo.,, which she declined because she already completed her bachelor’s degree at Pitt. She also won a 20 percent tuition scholarship from the New York Film Academy, which she may use in the future to pursue a career in acting.

“If I win Miss USA, I get to live in a penthouse in Trump Towers with Miss Universe,” Gatto said. “Losing is not an option. I think my personality was made to do this.”

Most of the state winners spend the months preceding the Miss USA competition doing charity work for various organizations and, Gatto said, they have the option to choose to have a platform, or sponsorship from one particular organization. Although no organization officially sponsors Gatto, she said her main goal is to spread awareness about sexual violence and rape.

Gatto’s mother, Theresa Gaugler, was raped 24 years ago as a college student while on her way home from work. Gatto is the product of that rape. Gatto’s good friend and Sigma Sigma Sigma sorority sister, Blair Droskey, said Gatto speaks quite openly about her own conception.

“You wouldn’t think that she doesn’t know who her dad was,” Droskey, a 2012 Pitt graduate, said. “It’s gotten easier for her to talk about now that she has this platform, now that she is Miss Pennsylvania [USA].”

“She didn’t grow up in a traditional household,” Cerilli said. “She doesn’t consider her mother a victim. She considers her a survivor.”

Gatto said she takes every opportunity she’s offered to appear on TV and often tries to use her time during those appearances to give advice on sexual assault, such as how to deal with sexual assault. She said she advises those who have experienced rape or sexual assault not to touch the scene of the crime and not to shower.

“I talk about what to do if it happens,” she said. “Even if [the police] do have the attacker, they’re going to get off if the evidence is all washed away.”

In the last year, Gatto has met with Highmark employees and various sorority members from across the state in downtown Pittsburgh for the Walk a Mile in Her Shoes organization, a race in which men wear high heels in order to raise awareness about sexual violence.

When speaking at events, Gatto said she often quotes Rape, Abuse & Incest National Network statistics. According to RAINN, two-thirds of assaults are committed by someone known to the victim. Gatto said she tells young people to be careful about whom they trust.

“It’s about being proactive and not reactive,” Gatto said. “But … you need to be reactive knowing what to do, like how to file a complaint and knowing what your options are.”

Gaugler said she is completely supportive of Gatto’s decision to talk about her conception publicly and is happy that her daughter’s recent publicity gives Gatto the chance to use their story to make a difference in other people’s lives.

While Gatto spoke about her mother’s rape during the interview portion of the Miss Pennsylvania USA competition, Gaugler said “you  could’ve heard a pin drop in the audience.” It was an emotional experience for both Gatto and her mother. Gaugler said she has always been forthcoming with Gatto about her father.

“She has known since about second or third grade how she came about,” Gaugler said. “I gave her what I thought she could handle.”

Gatto said she hopes to use her story and her visibility as Miss Pennsylvania USA to make changes to the way society perceives survivors of sexual assault.

In her communication with Tunie, Gatto said she hopes to get in touch with Mariska Hargitay, who plays Olivia Benson on “SVU.” Hargitay started the Joyful Heart Foundation in 2004 to “heal, educate and empower survivors of sexual assault, domestic violence and child abuse” according to the foundation’s website. Gatto said she hopes to collaborate with the Joyful Heart Foundation in the future.

It never occurred to Gaugler that her daughter would be in pageants until she began to idolize the character Kelly Kapowski, a pageant queen from the 1990’s TV show “Saved by the Bell.” Gaugler said her 5-year-old daughter dialed a phone number on a pageant advertisement they’d received in the mail.

“Next thing we know, we’re going to a competition in Valley Forge, Penn.,” Gaugler said. “For that pageant, I probably bought both her outfits at Kmart.”

These days, Gatto’s pageant gown runs for about $4,000 and preparing for a competition involves a lot more than her mom doing her hair and lip gloss. Gatto goes to the gym every day — usually twice a day — during the week and must have at least 30 outfits on hand during the Miss USA competition. Cerilli said contestants usually read the news for about an hour every day to prepare for the current events section of the on-stage interview.

“They don’t try to trip girls, but I’m sure you’ve seen girls completely lose based on their answers,” Cerilli said. “[Competitors] have to know both sides [of an issue] so you can give a politically correct answer.”

During her time at Pitt, Gatto was on the 2011 homecoming court and was “always hustling,” she said. She worked as a promoter for several companies and brands such as PepsiCo and was the co-marketing chair for Pitt Dance Marathon. All of these experiences prepared her for pageant competition.

“As soon as I met her, I knew she was going to be successful,” Droskey said. “She’s always networking. She’s always positive. I know she was a very positive influence on my life.”

But it’s not just tiaras and lipstick. The competition, which demands strong public speaking and poise, can build professional skills, too. Gatto said her work with pageantry speaks for itself and that it isn’t “fluff.”

“Pageantry allows women to be the best version of themselves,” Gatto said. “What you see is what you get — it’s hard work and preparation. All 51 of us are well-rounded, well-spoken and ambitious women who have a passion for helping others.”