The Pitt News • May 28, 2014 • https://pittnews.com/article/5811/arts-and-entertainment/mattress-factorys-exhibit-transcends-middle-east-politics-with-art/ 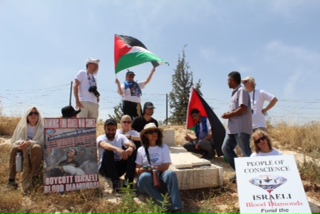 Editors Note: The Mattress Factory has cancelled the Sites of Passage exhibition because a majority of the artists withdrew. Due to our accelerated production schedule for the New Student Guide, The Pitt News was unable to remove this story before the pages went to print.

The Mattress Factory’s latest exhibition, Sites of Passage, opens June 1, with three key concepts in its subtitle that define the art: borders, walls and citizenship.

Guest curator Tavia La Follette brought together artists from Palestine, Israel and the United States to explore these themes together through the medium of art.

Instead of the politically-driven dialogues that often surround the Middle Eastern region, La Follette presents the space in the North Side museum as neutral ground.

“I wanted to create a dialogue with art because it reaches a deeper level,” she said.

Indeed, the dialogue illuminates the harrowing stories, travels and unique voices of the artists who are participating. The idea stemmed from La Follette’s previous exhibition in the Sites of Passage series that focused on Egypt and the U.S.

For the upcoming exhibit, La Follette travelled to Israel and Palestine to do preliminary research, and many of the artists were later able to meet each other there and begin the creative process that has now brought them to Pittsburgh. But this was not an easy endeavor.

Just as the exhibition centers on the themes of borders, walls and citizenship, so, too, did the interaction between the artists. With the complex situation between Israel and Palestine, the logistical maneuvering of the artists between these borders before their arrival in Pittsburgh was affected by these polemic concepts.

Each artist had experiences and difficulties with these issues, which sometimes impeded collaborative production, but at the same time expounded the message.

Dror Yaron, an Israeli artist and director of outreach at CMU’s CREATE Lab on Forbes Avenue, said the process of traveling between Israel and Palestine is complicated.

“It is illegal for an Israeli to enter Palestine, and I appreciate that I can make a statement here [in the U.S.] without being arrested,” he said.

Yaron, a citizen of Israel, lives in Pittsburgh now.

“Growing up in Israel, my perspective of the situation there is different than someone from here, even though I live here now,” he said.

Palestinian artist Mohammed Musallam also spoke of the difficulties that the border, walls and citizenship project posed for him in his trip to the U.S. to be a part of the exhibition. He said there is only a certain window of time that the borders of Palestine are open, and his trip to the U.S. involved multiple stops and a departure out of Cairo.

“I was fighting for my life to come here — but it was an amazing chance and experience,” he said.

Musallam’s art deals with geography and attempts to explore its imaginary relationship with the human being and its long-standing conflicts. But Musallam said that his art also presents a reality: “mortality of the individual against the eternity of geography.”

The complexity of his subject matter is reflected in the story Musallam tells, as well as his hope that art can bring some awareness to the complexity of the situation in Israel and Palestine.

“I want people to see that there is art in Gaza, people speaking English in Gaza, a contemporary art world in Gaza,” he said. “We are normal people in Gaza, just like you.”

This is the goal of the Mattress Factory’s Sites of Passage: to bring awareness of different cultures through the art of people from these places.

As La Follette said, “This is an opportunity to get people (artists) together who normally could not work together, and I am happy if people leave the exhibition with more questions than they arrived with.”