The Pitt News • May 27, 2014 • https://pittnews.com/article/5814/news/first-same-sex-marriages-in-allegheny-county-bring-new-concerns/ 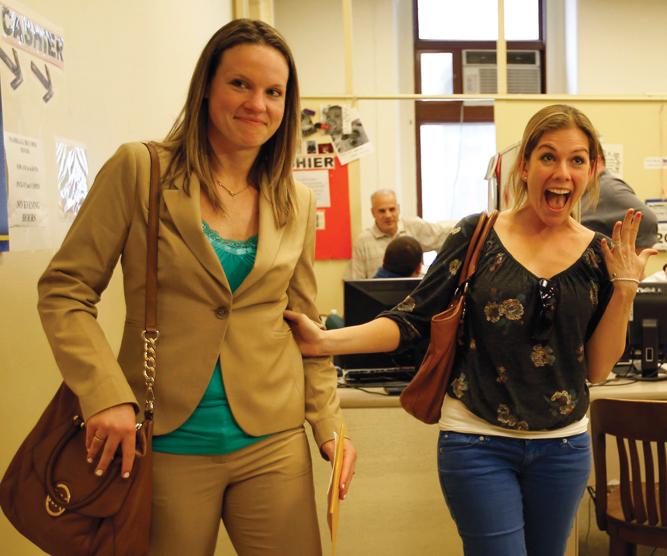 By Josh Ye / For The Pitt News

For Lyndsey Sickler, the legalization of same-sex marriage encourages younger LGBTQ people to feel more comfortable being themselves because they are entering “a world where their relationship and how they love would be validated.”

Now the LGBTQ community is one step closer to that validity.

Pennsylvania is now among the 19 states and District of Columbia in which same-sex marriage is officially recognized by law. The day after the ruling, Gov. Tom Corbett announced he would not appeal the court’s ruling allowing same-sex marriage.

The recent wave of legalizing same-sex marriage began last summer when the U.S. Supreme Court struck down part of the 1996 federal Defense of Marriage Act, which banned marriages between any couples of the same sex. Sickler, the chairwoman of Gay and Lesbian Community Center Downtown, said most people she knows reacted to the decision with joy.

“Many people in the [LGBTQ] community have literally been together for decades,” Sickler said. “Now, they can finally have their marriages and unions recognized by the law. This is a huge step to equal treatment for LGBT folks in the States.”

Many of Sickler’s friends in the LGBTQ community decided to apply for marriage licenses or get engaged as soon as they could.

Bonnie and Sally Hattman from McKeesport have been together for 30 years and applied for a marriage license online last Tuesday. They received their marriage license in a week  — after waiting for the state’s three-day period and the Memorial Day holiday.

Bonnie, a 73-year-old LGBTQ rights activist, said she was “over the moon” when she first heard the news. She said she can finally share the same last name with Sally, 66. Before Bonnie and Sally retired, they worked for the Metropolitan Community Church of Pittsburgh, “a church for all people,” and Wild Sister, a feminist magazine, to raise LGBTQ awareness in Pittsburgh area.

Bonnie and Sally went to the first Pride Parade in Pittsburgh in 1973, and were two of the roughly 150 people who were openly gay at the parade.

“The fight is finally over,” Bonnie said.

Bonnie and Sally said they plan to invite their family to celebrate their marriage as soon as possible. They have three sons and two grandchildren.

Pitt students are also pushing to raise awareness in the area.

O’Brien said the group’s members are already excited about the Pride Parade on June 15.

In addition to the upcoming parade, the Delta Foundation of Pittsburgh held a celebratory rally in Shadyside on Tuesday after the ban was overturned. Sickler said many community members participated in the rally, and there would be other celebrations going throughout the year as well, such as pride events hosted by GLCC throughout the summer.

District Judge Hugh McGough officiated some of Allegheny County’s first same-sex marriages on May 20, the day after Jones declared the ban unconstitutional.

Though many in Allegheny County celebrated the decision, Sickler said she still hears complaints that same-sex marriages will upend the current family structure of society.  Sickler said these worries are unnecessary.

“I think people who aren’t for gay marriage are just fearful of what they don’t understand. Gender differences don’t hinder family happiness. There will be all kinds of family, all across the spectrum,” Sickler said. “There will be blended family, adopted family and so on. The fear that people have that gay marriage is going to affect family is completely unfounded and ridiculous.”

Kitty Foster, a 20-year-old volunteer at GLCC, said legalizing same-sex marriage is a step toward equality and inclusivity for everyone. ,

“It should just be [called] marriage. But people’s attitude on same-sex marriage won’t change overnight. We can change the law. But people’s conception of what marriage implies has to be changed slowly,” Foster said.

Along with a change in how society identifies same-sex marriage, O’Brien said changes in the workplace are needed, too.

While many places have their own policies in place that prohibit discrimination based on sexual orientation, it’s not mandated by Pennsylvania law, as listed on the Pennsylvania Human Relations Commission website. O’Brien said a bill that specifically targets discrimination at work is essential and it has to be done on a statewide level.

“Essentially a same-sex couple could legally get married today, and could get fired from their job for having their wedding pictures up,” he said.

Richard Teaster, the director of Pitt Men’s Glee Club, echoed O’Brien’s sentiments. Some of Teaster’s LGBTQ friends and colleagues at the University are considering marriage, but they still plan to hide their identities in their workplaces.

It’s easier for Teaster to be “out,” he said, because his colleagues and students in the music department are supportive, and he feels more comfortable being open with his sexuality. But he said some other fields, especially medicine, are still very conservative.

The next step of the LGBTQ social movement has to include more of a focus on the T and Q, O’Brien said, which stand for those who identify as transgender or queer.

“Trans rights are so often overlooked because they are the least understood part of our society,” he said. “And sometimes it’s just as hard wrapping your head around someone who is queer because it implies a sense of not fitting into any already established categories.”