The Pitt News • May 27, 2014 • https://pittnews.com/article/5844/sports/club-sports-pitt-ultimate-loses-in-national-quarterfinals-falls-short-of-goal/ 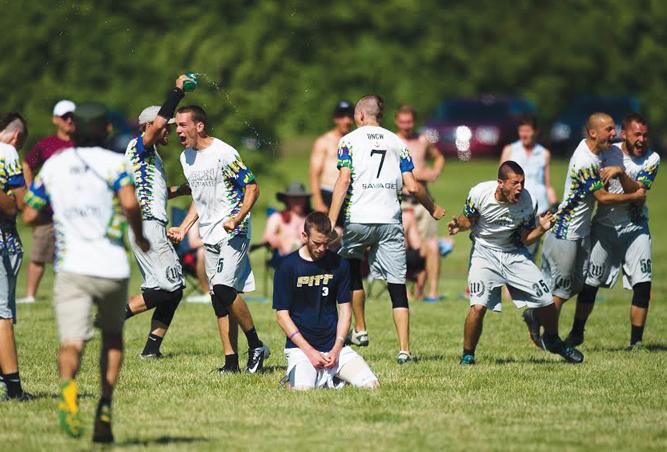 Marcus Ranii-Dropcho dropped to his knees, buried his head into the dirt and realized that his college Ultimate career had ended.

Pitt’s Ultimate team, En Sabah Nur’s attempt to three-peat as national champions came to an early, unexpected end Sunday when the team dropped its quarterfinal match against the University of North Carolina-Wilmington 14-13 in the 2014 College Men’s National Championships.

UNCW’s Xavier Maxstadt saved the final possession with an athletic layout and sent the disc to Austin McGrayne, who was waiting for the game-winning score at the front cone of the end zone. The observers signaled the score, and UNCW began celebrating its most prolific victory in program history all across the field.

Players shed their jerseys, piled up on top of each other and even the UNCW coach got in on the act, demonstrating a sprinting moonwalk in the middle of the field, for No. 5 UNCW’s upset of No. 2 Pitt, which came after a break on a double game point.

Meanwhile, after McGrayne hauled in the disc to cap off the upset, Pitt was noticeably shaken. Only three players on the squad have been a part of a loss in the national tournament. The team’s last loss in nationals came in 2011 in the quarterfinals to Colorado, 12-7.

“In hindsight, every member of the team and staff is certainly running over various things that could have been done differently,” head coach Nick Kaczmarek said. “That is especially characteristic of our team, which is a brotherhood of players who take responsibility for their contributions to the whole.”

Pitt came into the tournament with momentum, having won all 13 of its postseason matches by at least six points. It then had convincing victories in pool play against the University of Central Florida, Michigan, Texas A&M and Dartmouth.

“We were able to use our depth throughout the first four games,” Kaczmarek said. “Our D-line made incredible adjustments to playing each opponent and really took each team out of their game.”

But once the single-elimination portion of the weekend began, UNCW met Pitt with a type of athleticism that Pitt wasn’t prepared for, according to senior captain Aaron Watson.

“They had a level of skill and athleticism that we did not anticipate,” Watson said. “They are a very hot and cold team that we ran into red-hot.”

Pitt, a notably quick team, saw mostly zone defenses throughout the postseason. But UNCW showed that it wasn’t afraid of the opponent’s speed by using man-to-man defense.

This strategy put pressure on the Pitt offense, which could not extend a lead beyond two scores throughout the entire match.

Pitt came out of halftime with an 8-7 lead, but the offense of UNCW became more efficient. UNCW broke through zone defense with hucks and hammers. Hucks are long, high passes often nearly the full length of the field to a tall player in the end zone, while hammers are high overhead throws where the disc flies upside down in a parabolic type path.

Pitt received its third technical of the match for language and rushing the field early, and UNCW received possession closer to the end zone.

“The third technical gave UNCW great field position, but it took away their hucks which they heavily relied on in that game,” sophomore defender Connor Kazmierczak said. “So it actually gave us our best chance at a break, we just couldn’t punch it in.”

Pitt defended the UNCW possession after the technical but couldn’t take advantage of its next possession. UNCW scored on its next five possessions and only allowed Pitt to score three times, which carried the score to 14-13. Pitt was unable to break, and its season was over a couple games earlier than expected.

“We made some adjustments and started to force a few turnovers, but our offensive execution wasn’t quite strong enough to get the break,” Kaczmarek said. “It ended up being a game in which both teams executed at a pretty high level offensively and they simply out-executed us at the end.”

Next year, Pitt will most likely only lose two seniors, Watson and Ranii-Dropcho, to graduation. Ranii-Dropcho was a Callahan Award nominee, Ultimate’s Heisman Trophy, this year.

But their Ultimate careers needn’t be over — either player would have another year of eligibility if he pursued a graduate degree at Pitt.

Since the squad will retain most of its starting lineup, adding onto its streak of 10 consecutive trips to nationals is likely. The team will begin preparing for that task in early fall.

Kazmierczak is looking forward to accomplish a little bit more next season than just another trip to the national tournament, though.

“The loss in quarters lit a fire in all of us. It will make us work harder so we don’t face the same disappointment next year,” he said.