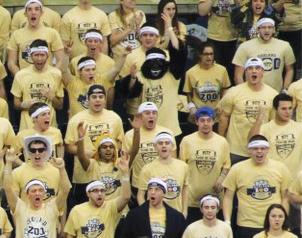 When I first enrolled at Pitt, I considered how I would try to “make my mark” at the University. Would I get involved in Greek life, try and hold my own with the Ultimate team or something else?

The route I ended up choosing resulted from a $75 costume that I bought from a Halloween store near my New Jersey home during my junior year of high school. While I didn’t know it then, it was the most authentic gorilla costume I could find without completely breaking the bank, and did it ever pay dividends.

I had known that the Oakland Zoo, Pitt basketball’s renowned student section, was raucous, but having never experienced it firsthand coming out of high school, I was not sure exactly what to expect. The Zoo jumps relentlessly when Pitt plays defense, has creative and synchronized chants and always tries to get the rest of the people in the arena on their feet.

But after attending a few games my freshman year and seeing how wild some of my fellow students got when the Panthers took the floor, I put two and two together and decided to add my own flair to the Zoo by wearing the gorilla costume at games.

Keeping with its name, members of the “Zoo” often bring costume horse heads, chicken heads and other animal attire. But it was rare that I saw a full animal suit worn at games, so I decided to give it a go.

I have poor visibility with the mask on, nearly pass out from overheating and catch some funny looks from elderly fans on my way into the arena, but it has still been one of my favorite experiences at Pitt thus far. And despite going through those difficulties every time I don the suit, I continue to do so. While joking with friends from home and school that the gorilla is my legacy, I exaggerate, claiming that nothing I do for the rest of my life will be a bigger accomplishment.

The first time I wore the suit was an early-season home game versus Detroit-Mercy during my freshman year in 2012. Some friends convinced me to wear it as I was, at that point, still unsure whether it would “fit in.” A brief, split-second moment during that game convinced me to continue wearing it.

For this particular game, we sat a couple rows behind one of the baskets. As an opposing player prepared to shoot a free throw attempt, everyone in our section yelled and waved.

I remember the player peering past the basket at me for an instant before continuing his windup for the shot. He made a strange, confused face, as he was probably not prepared to glance up and see a gorilla standing in his line of sight.

He continued his motion and proceeded to miss the shot. It was in that moment that I resolved to wear the costume to every game I could, and it encouraged me when I saw dozens of other people finding other creative ways to distract visiting teams.

Although I never donned the costume for attention and always just wanted an outlet to go extra-wild at a game, an experience I had with two fans outside the Petersen Events Center once really flattered me.

I was waiting outside the arena for some friends to catch up before we went in for the game versus Wake Forest in January. A young boy and his father approached me. The boy looked to be about eight years old, ready to cheer on the Panthers in his navy Pitt shirt and hat.

“We’ve been to almost every game this year, and my son always tries to look for the gorilla somewhere among the students,” the father said to me with his son right at his leg. “It may be strange, but could I get a picture of him with you?”

So after he took the picture, I high-fived the boy, and they went on their way into the arena. I won’t let the experience go to my head, but for me personally, that moment solidified what I had wanted to do ever since I put my deposit down for Pitt in high school: make my mark.

The boy didn’t care who was behind the mask, and that was the point. They didn’t ask for my name, and I didn’t expect them to. During games, My gorilla character is more important than my identity, and the atmosphere of the Oakland Zoo is more important than the gorilla. I just wanted to find a way to contribute to that, and I think I did.

There are so many amazing and unique ways to support the Zoo that I have seen on display the last two seasons: a giant cutout of Steven Adams, the 7-foot New Zealander who is now a rookie with the NBA’s Oklahoma City Thunder,with moving arms; more people in morph suits than I could count; a giant “Dalai Zanna” sign in homage to former player Talib Zanna. A personal favorite of mine is the “Pitt Basketball Shouting” Twitter account. The list goes on and on, and I just wanted to try and add to that list.

I made my mark in a way I would never have expected. I even put, “Wears gorilla suit at basketball games,” under special skills on my current resumé. I’m not the first one to wear an extreme costume to a game, and I definitely will not be the last. But the memories that have come from it are still special and are ones that anyone can have, not just those who are inside of a gorilla costume.