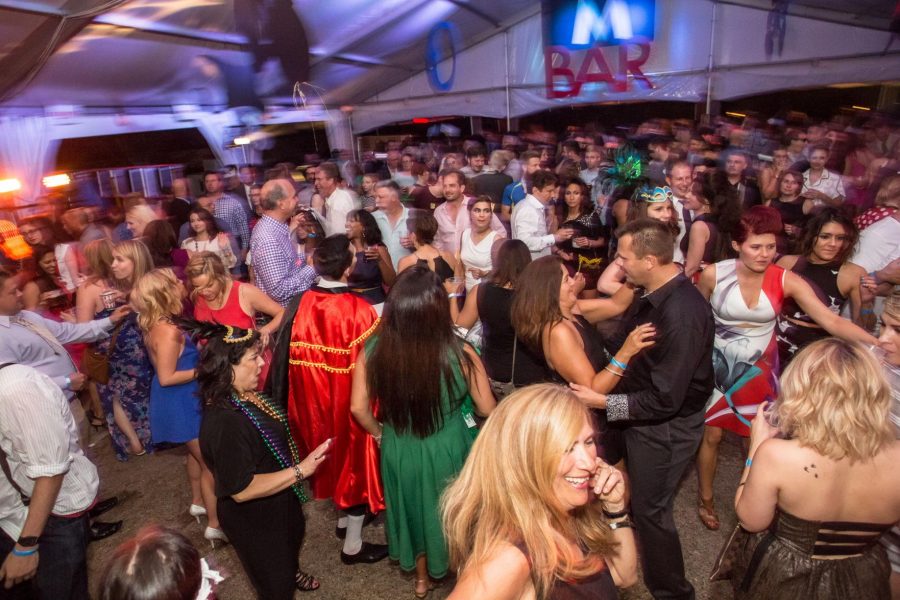 The Urban Garden Party at the Mattress Factory, a museum of contemporary art in the North Side, is the museum’s biggest fundraising event of the year. The event doubles as a costume party and features live music, food and an open bar, a silent art auction and a chance to view the third and fourth floors of the museum.

This year’s 21+ party ran from 7 p.m. to 11 p.m. — this year’s theme was “‘M’ is for Mattress Factory,” encouraging the more than 1,200 partygoers to show up donning their best Madonnas, Medusas and Mickey Mouses. The party’s decorations creatively stuck to the theme as well, with decals of Michael Jackson and the “Mad Men” logo adorning museum walls.

As a fundraising opportunity, the Urban Garden Party raises about $200,000 a year, a sizable chunk of the museum’s $1.6 million annual budget. Michael Olijnyk, the museum’s co-director, said that the museum raised a comparable amount this year.

According to Olijnyk, the money raised goes toward any hole the museum has to fill, whether it’s education projects or general operating costs.

Tickets to the party cost $110 for general admission and $300 for VIP passes. The VIP passes included an exclusive pre-party at 6:30 p.m., with live jazz music and a private Michael Jackson tribute by a professional impersonator, and access to an exclusive section of the venue.

While the price for both options isn’t appealing to students and low-income adults, Caitlin Harpster, the museum’s development and membership coordinator, said the prices reflect the costs of the food, drinks and entertainment.

“We always try to offer the best price for both us and the public,” Harpster said.

Members also receive a $25 discount on tickets, which leads to a regular uptick in registration.

The Mattress Factory also offers a free Community Garden Party the day after the party as a way to give back to the North Side community. The family-friendly event features music, food and arts and crafts aimed mainly toward children. Harpster said the Garden Party is a “different crowd, for sure.”

General admission guests entered the Urban Garden Party at 7 p.m., with a dark-haired mermaid doused in psychedelic lighting that mimicked an underwater atmosphere greeting visitors at the door. From there, guests wandered the two tents outside of the museum, which hosted open bars and food stations serving samples from restaurants like Bistro to Go, Atria’s and Double Wide Grill, which all serve upscale cuisine. Savoy’s savory and sweet chocolate ravioli received the most raves, with a separate chocolate and wine pairing station competing for equal interest.

Joining the Michael Jackson impersonator for the night’s entertainment was “Baffling Bob,” a magician who performed the classic sawing-your-assistant-in-half trick to tepid applause. The indie pop-rockband Meeting of Important People took over at 8:30 p.m., playing both their own original music and short covers of classics. Their cover of Michael Jackson’s “Billie Jean” met a warmer response from guests than their own tunes.

The most intoxicating part of the event — aside from the endless booze— happened between 7:30 and 9 p.m., when event organizers opened up the museum for guests to explore. The first floor housed a silent auction that sold art from local artists, with bidding starting at $100 per piece. The museum gave the artists a piece of material to incorporate into their work — this year’s inspiration was mirrors. One of the most visually alluring pieces, Lynne Kropinak’s “Mad Mosaic Mirror of Mementos,” was exactly what the title suggested — a round mirror surrounded by a mosaic of tiny, kitschy keepsakes like brass leaves, porcelain mermaids and colorful stones. Within a half hour, Kropinak’s piece had a $500 bid.

Guests roamed the third and fourth floors, which housed temporary exhibits by Pittsburgh artists Benjamin Sota and Ryder Henry. Sota, founder of street theatre/circus company Zany Umbrella Circus, brought a traditional circus environment to the museum with “Damn everything but the circus.” Visitors entered the installation by walking through a turnstile and into a red and white tent inside the museum. The tent’s interior is meant to be interactive, with trapeze swings, a German wheel, a bicycle with an attached umbrella and a video playing on a screen to instruct visitors how to use the equipment.

Henry, who specializes in Star Trek-inspired art,capitalized on his sci-fi obsession with the space installation “Diaspora,” which features giant, handcrafted satellites with holes to allow the interior lights to shine through. The light from the satellites creates a dreamy, romantic aesthetic that makes walking through the installation feel like walking through space.

The exhibits were a welcome departure from the party’s ritzy atmosphere and a reminder of what the event was truly about — supporting a museum that showcases the innovative works of local and international artists.