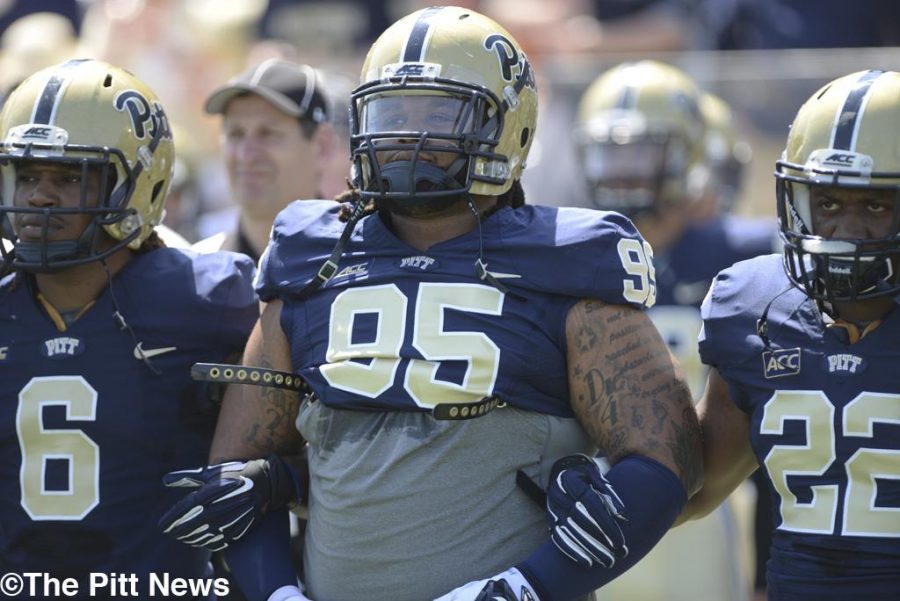 K.K. Mosley-Smith prefers not to dwell on the past. Whatever successes and failures he’s lived through, Mosley-Smith likes to keep them in the rearview.

“I’m just focused on the future,” Mosley-Smith said. “That’s what type of guy I am. The past is the past because tomorrow’s not promised.”

Mosley-Smith, now entering his fifth year at Pitt and his second as a starting defensive tackle, doesn’t like to focus on what’s already happened. Still, if he chose to look back, he’d see a past laden with twists and turns — four head coaching changes in his career, each as disruptive as the next. Some players might dwell on this turmoil, on how it impeded their paths to success. But Mosley-Smith instead takes it as the tale of how he became the person he is today.

“Struggle builds character, and I feel like those times made me a great person, the person I am now,” Mosley-Smith said.

Five years ago, Mosley-Smith only cared about playing. He was completely unaware of the ever-changing nature of college football staffs.

When he pledged to Dave Wannstedt, then Pitt’s head coach, he didn’t think about whether he would play for anybody else but him. Wannstedt was fired five months after Mosley-Smith’s commitment to the Panthers.

He was incredulous that the man he chose to play for was no longer there.

“I didn’t know [about coaching turnover]. I was like, ‘Coaches are in and out?’ How could I trust someone?” Mosley-Smith said.

As is the nature of recruiting, other schools started reaching out to him again, hoping to earn his commitment — and his decommitment from Pitt ­— ­in a time of uncertainty. But his mother’s guidance kept him dedicated to the Panthers.  She urged him to look at college football as a business, which helped Mosley-Smith decide to honor his commitment.

“I just felt like this is my city, and I’m going to keep fighting for my city,” he said. “I love it here, and I wouldn’t trade it for the world.”

Little did Mosley-Smith know that Wannstedt’s departure would portend of things to come.

Pitt’s next hire, Mike Haywood, lasted only two weeks before the school fired him following domestic violence charges. The school’s next coach, Todd Graham, bolted for Arizona State after 11 months at Pitt. It was unprecedented coaching turnover, and Mosley-Smith still had trouble grasping it.

“As a young kid coming in, I didn’t know that much. I didn’t know how to take it well,” he said. “But now I feel like that made me a stronger person, and I’m great with facing adversity through those times.”

“I just felt like this is my city, and I’m going to keep fighting for my city. I love it here, and I wouldn’t trade it for the world.”

As years passed and some stability set in through Paul Chryst, Pitt’s coach after Graham, Mosley-Smith was able to mature as a man. Change, which had haunted his early years at Pitt, didn’t bother him. He watched as other football coaches spurned schools and professional teams alike for new opportunities.

Through such observations, his mother’s advice began to make sense.

“People don’t look at it this way, but at the end of the day, this is a business. At the next level, it’s a business. You see changes all the time,” Mosley-Smith said.

So when Chryst decided to take the head coaching job at Wisconsin at the end of last season following three seasons at Pitt, Mosley-Smith stepped up as a leader and helped guide his younger teammates through the experience.

“Some of these kids are such young kids, so when you’ve got upperclassmen you really need to get with them and work with them through that,” Mosley-Smith said.

At this time, Mosley-Smith wasn’t really thinking about himself, about whether or not he wanted to continue to stick it out at Pitt. Years before, he made the decision that he wanted to represent his hometown, and that thought never wavered.

Regardless of the instability, he never regretted his decision to play at Pitt.

“I don’t really like to regret, because whatever you did in the past, you’ve got to work to get better for the future,” Mosley-Smith said. “You can’t change the past. I can’t go back and say, ‘Let me change this. Let me do this different.’”

When Mosley-Smith does choose to look back and reflect, he does so with moderate satisfaction for his career accomplishments. At the unglamorous nose tackle position, Mosley-Smith accumulated 27 tackles, two for losses, and a fumble recovery, while starting 12 games last season, his first year as a starter.

“I’ve been somewhat happy [with what I’ve done], but I have a lot of improvement to make on and off the field,” Mosley-Smith said. “I just humble myself each day.”

Now in his final season, Mosley-Smith is cognizant of the fact that he’s not a household name, though he’d like to make strides towards that to fulfill his NFL dreams.

With a new head coach with a defensive mindset in Pat Narduzzi, Mosley-Smith is more confident than ever that he can reach his goals.

“It feels great to get a defensive-minded head coach because you know he’s got plans [for the defense],” Mosley-Smith said.

Besides football, the staff has created a tight relationship with Mosley-Smith and the rest of the team, which stretches both on and off the field.

“They want to get to know you for you. They want to know who you are in and out,” Mosley-Smith said. “Any one of the coaches I want to have a conversation with, I’m comfortable with them because they built that bond early.”

Motivated by the coaches, Mosley-Smith worked hard in the weight room this offseason, which has left him, in his opinion, in peak career shape.

But, when Mosley-Smith’s teammates are pushing him, he’s always quietly nudging them in the right direction as well, endowed with experience few other players can claim. Mosley-Smith has embraced his spot as a senior leader, providing leadership in a variety of ways, defensive line coach Tom Sims said.

“We’re tired [of losing], and we’re ready to go out there and get what we want.”

“He’s definitely provided leadership from day one — with his work ethic, with his attitude, his approach,” Sims said. “The better question would be in what ways doesn’t he [provide leadership].”

As a player who’s been around for a while, defensive coordinator Josh Conklin said Mosley-Smith knows how the team needs to practice, emotionally leading to make sure his peers do things the right way. Through the coaches and leaders like himself, Mosley-Smith said the team’s expectations are higher than they’ve ever been.

“We’re tired [of losing], and we’re ready to go out there and get what we want,” he said.

If Pitt is to reach its aspirations this year — to win an ACC title — Mosley-Smith will need to be a pivotal part of the defensive line, stuffing the opposition’s running game and applying occasional pressure for a defense that often struggled last season.

“He’s going to have to be a strong force for us to get to where we want to get to this season,” Conklin said.

Mosley-Smith knows how important he is to the success of the defense. He embraces the pressure, and said it needs to be a “storm” each time he steps on the field. When he reflects at the end of the season, he doesn’t want to think he left anything behind. After all, he hasn’t had any regrets yet — so why start now?

“Each game, I’ve got to give it my all and cause havoc in there,” Mosley-Smith said. “I don’t want to look back and regret anything.”