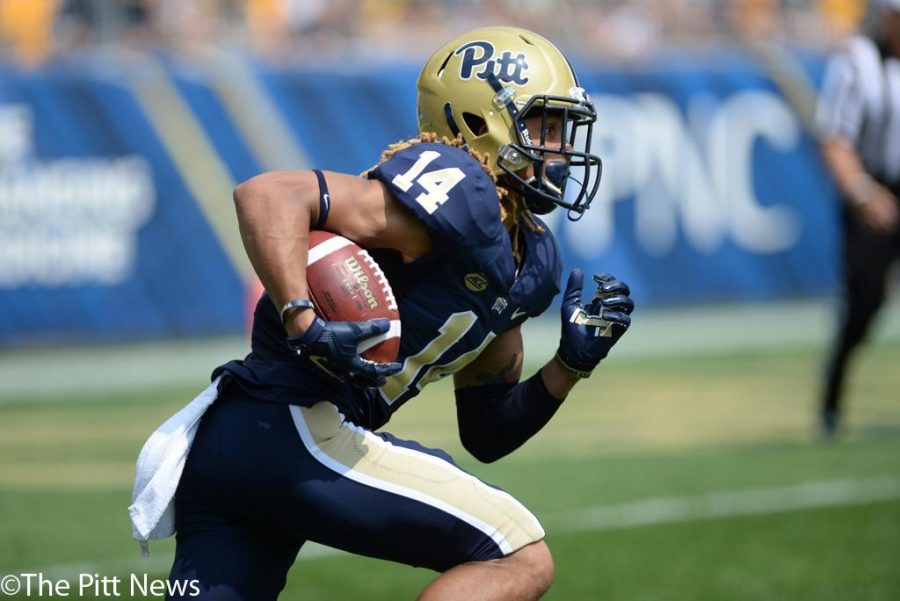 But against Youngstown State, with Boyd suspended and Conner hampered with a knee injury he sustained in the first quarter, an unexpected source gave Pitt a jolt of energy twice: sophomore cornerback Avonte Maddox.

With an 89-yard kickoff return touchdown and a key fourth down tackle in the fourth quarter, Maddox qualmed the Penguins’ momentum to help lead Pitt to a 45-37 victory in Pat Narduzzi’s coaching debut on Saturday at Heinz Field.

Each of Maddox’s plays were equally important, the first being the kick return which followed a interception touchdown return by Youngstown State — bringing the score to 17-13 Pitt. The touchdown was Pitt’s first on a kickoff return since 2011, when Buddy Jackson returned one against Utah.

“We needed a big play because it was going into the half, and I made one. We needed that, so I had to make the play,” Maddox said.

The nature of the touchdown was just as surprising as the source. Maddox collided with fellow cornerback Lafayette Pitts before regaining footing, finding a hole and racing toward the endzone. Later, when Youngstown State was working to bring an already 31-23 game closer, Maddox made the fourth-and-one tackle for Pitt to regain possession. Narduzzi lauded Maddox’s effort to make a play in a big moment.

“That was a huge defensive stop,” Narduzzi said. “You talk about adversity, there’s adversity throughout a whole game, first quarter, second quarter, it goes on a whole football game. I really felt like our guys fought back when they needed to.”

Ideally, Narduzzi’s Pitt coaching debut would’ve gone smoothly, with his team easily beating Youngstown State and not needing Maddox to make such vital plays. Things, though, did not go quite as planned, but Narduzzi was still pleased with the end result.

Any time Pitt looked like it was going to take hold of the game, a failed drive or defensive breakdown loosened that grasp. The initial time came via Youngstown State safety LeRoy Alexander’s pick-six, narrowing a 14-3 Pitt lead.
“We started as fast as we wanted to start, obviously didn’t finish like we wanted to”
Before Alexander’s interception, Pitt’s two touchdowns came from Conner, who compiled 77 yards before suffering a right knee injury in the second quarter. The first came on Pitt’s second possession, when Pitt capped off a six-play, 72-yard drive, with a 13-yard touchdown by Conner.

On the next drive, Narduzzi brought in Tennessee quarterback transfer Nate Peterman to lead the offense, in place of junior starter Chad Voytik. The decision was pre-planned to get Peterman playing time in a low pressure situation. Peterman connected with wide receiver Dontez Ford for a 42-yard pass completion. Conner, again, completed the drive, this time via a 4-yard touchdown. Peterman did not see the field again after throwing an interception on his very next throw on the following drive.

At this point in time, Narduzzi was happy with the way the game was going. That happiness would not last the full 60 minutes, however.

“We started as fast as we wanted to start, obviously didn’t finish like we wanted to,” Narduzzi said.

At halftime, Pitt led 24-13, a lead which Youngstown State quickly diminished with a 23-yard field goal. Pitt struck back when freshman running back Qadree Ollison took advantage of stout blocking for a 71-yard touchdown run. Ollison shouldered most of the carries after Conner’s injury and he didn’t disappoint, rushing 16 times for 207 yards, the best performance by a Pitt freshman in their debut game.

Narduzzi said Ollison’s effort did not surprise him, adding that he often had strong performances in practices. Both Narduzzi and Ollison knew he could step up in a big situation.

“Coach Narduzzi’s always preaching next man up,” Ollison said. “We’re always preaching that in the running backs room. We’re all equal to each other, we really believe that. Anybody can go in there and get the job done.”

The Penguins quickly answered Ollison’s score with an 82-yard touchdown drive of their own, as  running back Jody Webb capped the drive with a rushing touchdown from 27 yards out. Subpar defensive performance was standard for Pitt in the second half, which Maddox attributed to an inability to stop the Penguins’ run game.

Linebacker Nicholas Grigsby pointed to other reasons for the Panthers’ defensive failings.

“We just got to make sure we’re disciplined and in the right spots at the right time,” Grigsby said.

Following Maddox’s stop on Youngstown State’s next drive, Voytik launched the ball deep to tight end Scott Orndoff for a 55-yard touchdown on the first play of the ensuing drive, giving Pitt a 38-23 lead. It was a lead which seemed safe given the swing of momentum. But as was typical to the game, Youngstown State quickly answered, with wide receiver Andre Stubbs scoring, this time by a 77-yard receiving touchdown.

Ollison, though, again provided an answer, bringing Pitt to the one-yard line with a 52-yard run. Voytik finished the drive with a quarterback sneak for a one-yard touchdown. It seemed like a potential dagger for the Penguins, but Webb and Youngstown countered in one play with a 75-yard rushing touchdown to bring the score to 45-37.

That score remained, as Pitt ran out most of the remaining four minutes on offense.

Pitt will take the field again next Saturday at Akron at 6 p.m. In the meantime, Narduzzi and his team will have plenty to work on.

“From the top down, we got a little bit ways to go,” Narduzzi said.