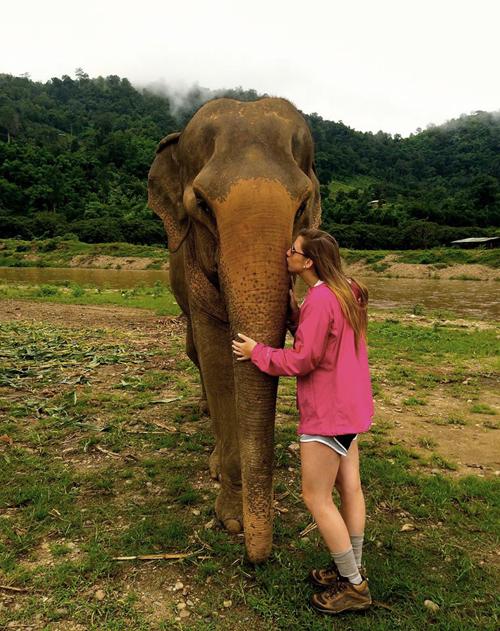 For Allison Faust, hands-on job training is important — so much so that she went all the way to Thailand to get it.

Faust, a senior biological sciences major who wants to become a veterinarian, spent two and a half weeks last July in Thailand through a summer study abroad program, Loop Abroad. While in Thailand, Allison volunteered at the Animal Rescue Kingdom as well as at the Elephant Nature Park, a refuge for abused elephants. At ARK, Faust assisted in surgeries on a dog and a cat, and at the ENP, she saw firsthand the horrors of elephant abuse.

Faust said the experience was a vital stepping stone on her path to becoming a professional veterinarian. She engaged in service projects — hands-on experience bathing, feeding and caring for elephants and participating in surgical procedures like animal neutering.

At a young age, Faust was deeply affected by her sister who has epilepsy. After watching her sister interact with animals, Faust decided to devote her life to caring for animals.

“[My sister’s struggles with epilepsy] really inspired me to work in the medical field,” Faust said.

It was Faust’s empathy and drive that made her an ideal candidate for Loop Abroad.

Jane Stine, managing director of Loop Abroad, said the program only accepts 10 to 12 students max per group and requires an essay, two references and a transcript. She said they look for hardworking individuals who have a passion for working with animals. The program also requires a tuition fee of more than $3,000 for the Thailand experience.

“We want to have people who will participate, learn and work hard,” Stine said.“We look for people who will support each other [even] though everyone is from different backgrounds.”

In Thailand, when not working with elephants, Faust enjoyed the country’s delicacies and cuddled tigers, things she never thought she would do as a veterinarian.

“When I first thought to become a veterinarian, I only thought I would work with small domestic animals like dogs and cats,” Faust said. “This experience really opened me to wanting to work with large and exotic animals.”

In Thailand, Faust, a self-proclaimed “documentary junkie,” saw in real time what could have been a powerful documentary topic— the horrors of elephant abuse for commercial purposes. Working to heal the injured elephants opened her eyes to injustice against animals, she said.

“All of the elephants there have been rescued from some type of abuse: working in the logging, tourist and entertainment (circus) industries, being used to beg for money on the streets and more,” Faust said. “Some have been found injured by traps or mines in the wild.”

Faust learned from her supervisor that all the elephants have to be “broken in” or forcefully tamed by torturous methods. Sometimes, Faust said elephants are forced into a small area between four wooden posts and tied up to be completely immobile. Faust said they were then beaten and forced to stand in their own waste so the animals fear humans and listen to their handlers.

Jen Faust, Allison’s mother, said her daughter has always had a strong character and described her as a “warm, friendly and kind person.” So when Allison Faust saw the true nature of what was happening to elephants in the entertainment industry, she was appalled.

“You see these elephants that look like they’re just enjoying their time in the circus doing tricks, but in reality before they were taught those tricks, they had to be broken in and beaten,” she said.

When she returned home from her trip, her mother said Allison couldn’t stop talking about it.

“She now wants to see Africa and see all the exotic animals there. I told her if she gets into vet school, we will send her to a safari,” Jen Faust said. “Africa is her next trip, it’s her goal.”

Following her work in Thailand, Faust plans to continue to take steps against circus animal abuse.

“I believe [the circus goes] down to the Consol [Energy] Center in Downtown Pittsburgh, and if they do come this year, you will find me there. I will probably be outside picketing or something,” she said. “I am all for the circus, but there is no need to have the animal component to the circus.”

Faust’s experience working alongside wild and abused creatures gave her more than the opportunity to learn medical procedures. She also fostered a newfound passion for animal rights.

“I think a lot of us don’t really question the things in our life,” Faust said. “We just accept things the way they are because that’s just how they’re presented to us. But that’s not necessarily the way they have to be.”