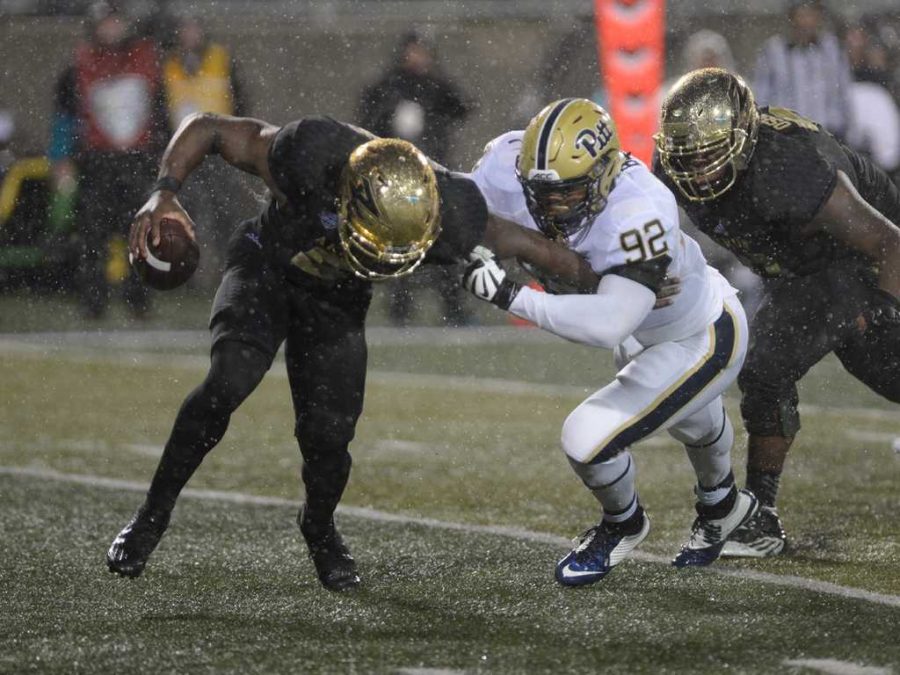 AKRON, Ohio — It was steel city football in steel city weather in a city of rubber.

The home of Goodyear Tires is also home to InfoCision Stadium – Summa Field, where Pitt beat Akron 24-7 on a rainy Saturday night.

The water-logged win brought Pitt to a 2-0 season record.

“What better weather to have for a Pittsburgh football game?” Pitt head coach Pat Narduzzi asked.

The rain helped slow down an Akron offense that put up 382 total yards against the Panthers last year in a 21-10 win at Heinz Field. This year, the Zips could only muster 110.

A large part of that dominance came because of Pitt’s defensive front. After recording 19 sacks all of last year, the Panthers have tallied 10 in their first two games, including four against Akron.

To Pitt junior defensive end Rori Blair, this is no surprise.

“This is coach Narduzzi … it’s all about hustle and all about defense,” Blair said.

Blair, playing in his first game of the year after a team-enforced DUI suspension, recorded 1.5 sacks and four tackles. But he was quick to take the spotlight off himself.

“I think everybody did quite well today,” Blair said. “It wasn’t just individuals, it was the whole team.”

After giving up 407 yards against Youngstown State last week, Pitt cut its total yards allowed by 300 yards, only giving up the aforementioned 110.

For Pitt freshman safety Jordan Whitehead, the game was a chance to make amends for the defense’s performance against Youngstown State.

“[It was] just another week to get better,” Whitehead said. “The coaches were preaching all week, just learn from your mistakes”

Narduzzi was equally happy with how the defensive side played.

“We gave up that one run, which still irks me — I’m looking for perfection — but they had a little over 110 yards. It’s always a good day when you do that,” Narduzzi said.

That “one run” was a 32-yard scamper by Akron running back Conor Headley with 6:24 left in the second quarter to make the score 7-3 Zips.

It was the Zips’ one and only score of the game.

Pitt’s first score came on a 25-yard field goal by Chris Blewitt with 2:55 left in the first quarter that gave Pitt the first lead of the game.

But after Akron’s second quarter score, an anemic drive by Voytik led Narduzzi to give Peterman the ball for a two-minute drill to end the first half.

Peterman delivered, marching down the field and hitting J.P. Holtz with a 18-yard touchdown strike with 44 seconds remaining to make the score 10-7 Pitt.

“J.P. Holtz ran a good route, and I threw him a good ball,” Peterman said.

Peterman ended up playing the rest of the game at quarterback, but Narduzzi urged not to take this as a sign of things to come.

“We felt like [Peterman] was a little hotter, a little more on target with some of his throws. Next week it could be the other way around,” Narduzzi said.
“This is like revenge for last year”
Pitt had injury scares in the second half, with both redshirt freshman Qadree Ollison — in his first career start — and junior Tyler Boyd “cramping up,” in Narduzzi’s words.

But Ollison still managed a two-yard touchdown run with 5:11 left in the third quarter before he left the game. The score gave Pitt a 17-10 lead. He finished the game with 86 yards on 21 carries.

As for Boyd, returning from his suspension, he caught 11 passes for 95 yards.

“It felt great, be back part of the Pitt team, make some plays, help the team win,” Boyd said.

Because of Ollison’s cramping, “young pup” freshman running back Darrin Hall scored his first career touchdown in the fourth quarter to finish the scoring, extending Pitt’s lead to 24-7. The five-yard run came with 2:51 left in the game.

For Blair, the game was a little more special because of recent history.

“This is like revenge for last year,” Blair said.

But even if revenge is sweet, Blair is keeping his sights forward.