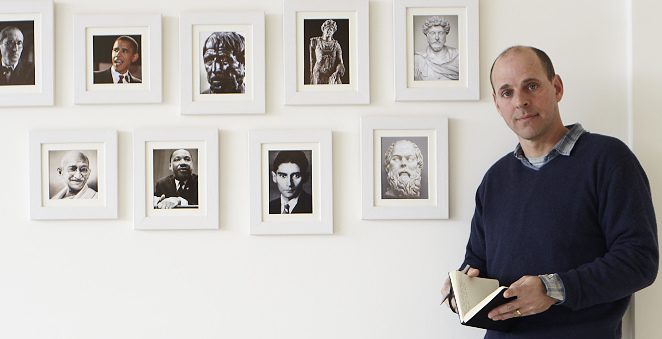 For the 16th time in as many years, a series of acclaimed living authors will visit Pitt to read their work and impart their knowledge.

On Tuesday, Pitt announced it will host the 16th season of the Pittsburgh Contemporary Writers Series, with a schedule of six writers speaking each month — excluding December and January — from now until the end of the school year. Michael Paterniti, longtime correspondent for GQ, Pitt’s 2015-2016 William Block Senior Writer and author of several works — including two novels, a collection of essays and a memoir — will lead off the series on Sept. 24.

Pitt awards the William Block Senior Writer designation to an esteemed writer or poet each year who it feels has achieved significant career accomplishments.

Each event is free and open to the public. Readings will start at 8:30 p.m. in the Frick Fine Arts Auditorium.

“For the past 16 years, the Pittsburgh Contemporary Writers Series has sought to attract innovative minds whose artistic philosophies and unique approaches to writing make each reading in the series a special occasion,” Lynn Emanuel, English professor and director of the Pittsburgh Contemporary Writers Series, said in a release.

The University of Pittsburgh Writing Program and the University Store on Fifth are co-sponsoring the series. The Office of the Dean of Arts and Sciences as well as private doners fund the series, according to Pitt spokesperson Anthony Moore. Moore said Pitt would not disclose how much this year’s series will cost.

The Frick Fine Arts Auditorium, which seats 200 people, was down to “standing room only” during last year’s Writers Series events , Moore said in an email Tuesday.

The complete schedule of speakers in the series and a brief description of their work follows:

Sept. 24., Michael Paterniti. Paterniti is a nonfiction writer, novelist and poet and is Pitt’s 2015-2016 William Block Senior Writer. Paterniti is known for his novel “The Telling Room: A Tale of Love, Betrayal, Revenge and the World’s Greatest Piece of Cheese,” which was a New York Times best-seller. Paterniti also is the author of the essay collection “Love and Other Ways of Dying” and the memoir “Driving Mr. Albert: A Trip Across America with Einstein’s Brain.”

Nov. 19., Ed Roberson. Roberson is a poet, Pittsburgh native and author of the nationally acclaimed poetry collections “Atmosphere Conditions” and “Voices Cast out to Talk Us in.” His literary honors include the 2011 Stephen Henderson Critics Award for Achievement in Literature and the 2008 Shelley Memorial Award from the Poetry Society of America.

Feb. 11., Rachel Zucker. Zucker is a poet and is the author of the book “Museum of Accidents,” which Publishers Weekly named one of the five best poetry books of 2009.

March 22., James Fenton. Fenton is a poet, journalist and literary critic who has authored more than 15 books. His latest poetry collection, “Yellow Tulips: Poems 1968-2011,” won both the Queen’s Gold Medal and the Whitbread Prize for Poetry. Fenton won the 2015 PEN Pinter Prize, which recognizes British writers of outstanding literary merit.

April 7., Karen Joy Fowler. Fowler is a fiction writer, best known for her New York Times best-selling novel, “The Jane Austen Book Club,” which was released as a major motion picture of the same name in 2007. Her most recent novel, “We are All Completely Beside Ourselves,” won the 2014 California Book Award for fiction as well as the 2014 PEN/Faulkner Award.