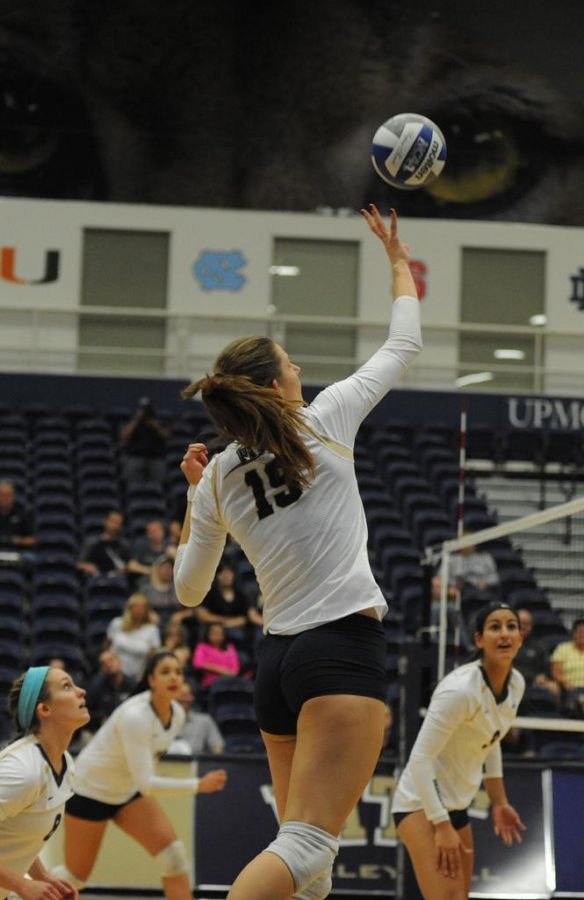 “We basically crushed them,” Mariah Bell, a sophomore outside hitter, said.

The Wolfpack came in with a nine-game winning streak, but the team couldn’t phase the Panthers as they burst out to a quick start. Pitt held leads as large as 10 points in its 25-12 first set win.

NC State rallied in the second set, keeping the score close throughout. The Wolfpack won the last two points from a 24-24 draw and took the second set 26-24.

Following a 1-1 start, the Panthers picked up their defensive intensity in the third and fourth sets to wrap up the match.

NC State’s below .200 attacking percentage in each set of the match demonstrated how thoroughly Pitt dominated.

The third and fourth sets of the match had Pitt gain an early lead, which it never gave up. Pitt wound up winning the two sets 25-21 and 25-19, respectively, also handing the team its first conference win of the season.

Pitt used the momentum from NC State in its next match against North Carolina in a Sunday matinee at the Fitzgerald Field House.

“We basically crushed them.”

The Panthers jumped out to an early 7-2 first set lead, exhilarating the home crowd. Despite the initial setback, the Tar Heels crawled their way back into the set, tying the score 19-19.

After a few back-and-forth points, the score remained knotted at 23, followed by two Pitt points to win the first set 25-23.

The second set required more finesse. The Tar Heels increased their defensive pressure and stifled any middle offense from Pitt.

Instead, the Panthers found success from the outside portions of the court. Pitt graduate transfer middle hitter Kadi Kullerkann had seven kills and hit for a .636 kill percentage.

“They had a really good block, which we played really successfully against,” Kullerkann said.

UNC felt the presence of the Houston transfer at the end of the second set. Kullerkann made four straight kills to close with a 25-18 Pitt victory.

In the third set of the match, the Panthers stumbled out to a 7-3 deficit marked by sluggish play. Even with the bad start, the team didn’t feel overwhelmed.

“From a confidence standpoint, every point we were confident in each other and ourselves and we never had any doubts,” Orchard said.

The team surged to take the lead back from the Tar Heels and pushed the score to 16-13.

From there, the match was back and forth, with the Panthers eventually capturing a 25-23 third set victory and a signature win in the process.

“This was a big step for us because we believe at the end of the year UNC will be a top 50 RPI team,” Fisher said.

The more high-RPI team wins a team accumulates before the end of the season, the better the team’s resumé looks to the NCAA Tournament selection committee.

After last season’s snub, Fisher is focused on building a stronger tournament case.

Pitt’s next match is Wednesday at Virginia Tech. Tipoff is at 7 p.m.