Dining guide: Rookie of the year: AD’s establishing itself in first year on campus 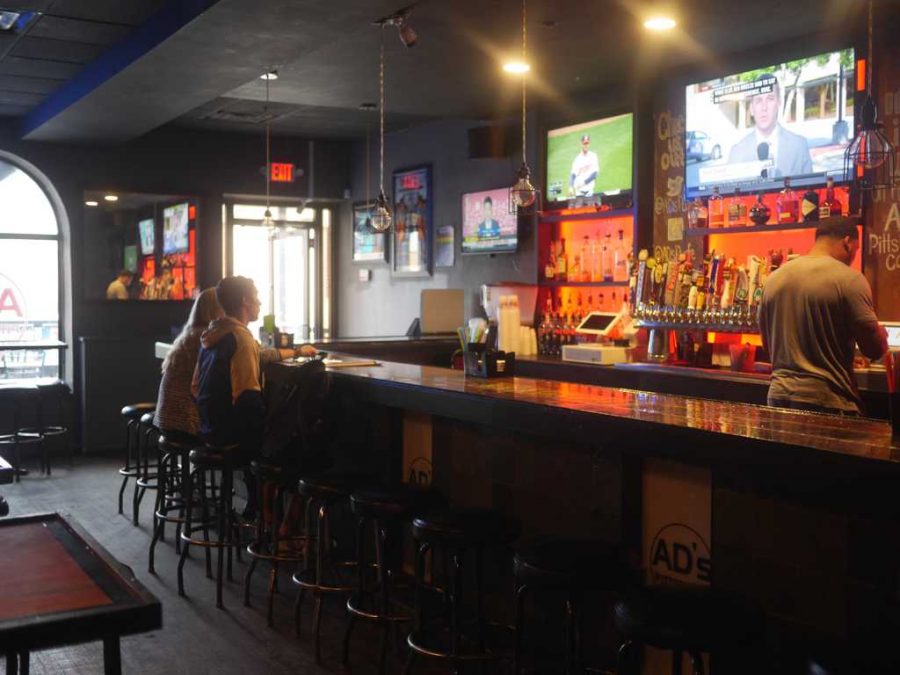 When discussing their joint dream of opening a restaurant and bar, brothers Aaron and Archie Donald considered three locations.

They tossed around the idea of Toledo, where Archie played college football for the Toledo Rockets. They mulled over St. Louis, where Aaron was currently located, playing defensive tackle for the St. Louis Rams, where he earned the 2014 NFL Defensive Rookie of the Year award.

After some insistence from Aaron, the brothers agreed to the third location: their hometown of Pittsburgh, where Aaron racked up numerous awards as a star on the Panthers football team.

Aaron announced the pair’s intention to open “AD’s Pittsburgh Cafe” via Twitter on Dec. 6, 2014. After remodeling what was the location of the defunct original Pittsburgh Cafe on Meyran Avenue, AD’s opened on April 18, 2015.

Aaron wanted to restore the old mainstay of Oakland, but was out to do it his way. The building is three floors, with the first floor serving as a sports bar and restaurant, decorated with Pitt memorabilia and Aaron’s jersey. The next two floors serve as a club.

The business went into a bit of a lull after its April opening, but it has now become a campus hot spot.

“The summer was a little bit slower, because we’re right on Pitt’s campus not as many students are here,” bartender Jordyn Kamasa said. “As soon as school started, it picked up really quick.”

Archie is pleased with the attention his business is attracting.

“Get there early, because there’s always a line around the building,” Archie said.

As for its culinary side, AD’s boasts a menu of breakfast items, wings, salads, burgers and three specialty sandwiches named after the Cathedral of Learning, the Petersen Events Center and Hillman Library.

Archie said the balance between cuisine and alcohol is crucial to the success of a place like AD’s.

“I want everything to be great about the establishment,” Archie said. “Not just the booze, but the food as well.”

Archie credits the development of the restaurant and bar to the venue’s environment.

“I think you get the kind of business we have now due to atmosphere,” he said. “We try to make everybody’s time there a great time.”

Patrons like Pitt senior Jaxon Vallely laud the vibe at AD’s, particularly for the versatility it offers.

“I think [AD’s] has something for everyone,” Vallely said. “If you wanna hang out and just relax, there’s the first floor bar, and the second floor is good if you want to dance. It’s a more active environment.”

The bar and restaurant has hosted numerous events, ranging from “Christmas in July” to a birthday party for Aaron.

The Donald brothers run AD’s together during the NFL offseason. Archie said Aaron is there “seven days a week,” but Archie does most of the management during the football season. Still, Archie said his busy brother, who played at Pitt from 2010-2013, is always a major contributor.

“[Aaron] has a lot of input on what kids like in this area, and that kind of gives me a base to go off of.” Archie said.

While Archie may not have as much knowledge of the Oakland clientele, he is experienced in the bar industry, having worked at similar restaurants since he was in Toledo.

“When I was 19, I first started working in bars and whatnot, and I’ve been doing it ever since,” Archie said. “Doorman, security, bar-back, bartender, manager and now an owner.”

Archie worked at numerous locations, eventually managing a restaurant called Arnie’s Bar and Grille in Toledo for a few years.

After compiling that experience, AD’s is a culmination of them all.

“That’s why I did [all that work] in Toledo for years,” Archie said. “Just to try to build that experience. So when I do go ahead and start my own establishment, it’ll just be like second nature to me.”

While AD’s has thrived, Archie isn’t going to stand pat. The owner said he plans to open a few other locations around the city if the business maintains its current pace.