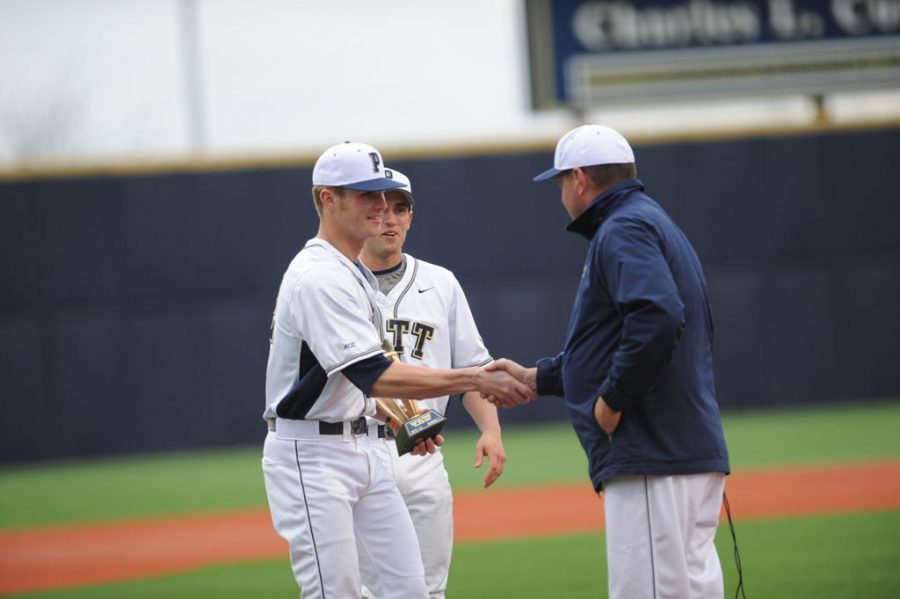 For the third straight year, the MLB Draft has put three Panthers on the road to the bigs.

In the 28th round of the MLB Draft on June 10, the Oakland Athletics drafted junior starting pitcher Marc Berube. In the 31st round, the New York Yankees selected senior relief pitcher Hobie Harris. Finally, in the 36th round, the Minnesota Twins drafted junior pitcher Rich Condeelis.

“It’s awesome, I didn’t really expect it when I left home from Quebec to go play in the United States” Berube said. “I guess I’m just shocked.”

Berube, born in Canada, did not play baseball in high school. He first attended Northeastern Oklahoma A&M College, playing there for two years before transferring to Pitt. He then went 2-7 with a 5.10 ERA in 13 starts over 65.1 innings on the season.

Condeelis was also in the midst of his first Pitt season after having transferred from Lackawanna College. At Lackawanna he mostly played first base, hitting .387 for the season, but also pitched three innings in relief. At Pitt, he moved to the mound, finishing the year 0-2 with a 4.37 ERA in 22.2 innings, all in relief, compiling 2 saves in the process.

“It’s an honor. It’s everybody’s dream, you play the game and you get recognition. It’s an incredible feeling,” Condeelis said.

Harris has played at Pitt for two years after transferring from Paris Junior College in Texas. He has mostly pitched in relief, but also started two games this year. During his Pitt career, he is 6-9 with a 3.82 ERA over 92 innings.

“It was always a goal of mine, but when the time came and I heard my name called it was surreal. It hasn’t set in yet,” Harris said.

When asked if he would sign with the Yankees, Harris responded only with an emphatic “yes.”

Berube also said he would likely sign with the Athletics.

“It’s a door that opened, and you never know when it will close forever, and I’m just going to take my chance,” the junior said.

Condeelis was not as certain.

“I have to really think about it. I haven’t sat down with my parents and [Pitt’s] coaching staff, making sure everybody is on the same page,” Condeelis said. “It’s definitely not for sure right now, it’s just kinda wait and see.”

In 2014, three Pitt pitchers were drafted to the majors. The Yankees drafted Matt Wotherspoon and Joe Harvey, while the Milwaukee Brewers drafted Luke Curtis. Curtis went highest, in the 18th round. All three ended up signing.

With two familiar faces in the Yankees’ system already, Harris said he will have a little help in his path to the majors.

“[Wotherspoon and Harvey] are two good friends of mine. But they also worked their way up in the ranks,” Harris said. “They may be able to give me some pointers along the way about how they found success…that’ll pay dividends for me in the long run.”

Right now, both Wotherspoon and Harvey are pitching in full season Class A ball for the Charleston RiverDogs.

What level of the Yankees’ minor league system Harris will start at is up to the team’s management, so he could take years to reach the majors — however, he is choosing to focus on the positives.

“Just realizing how cool an opportunity it is, and how few people get to experience this,” Harris said. “I feel pretty lucky to be in this situation.”