Give it the sniff test: Pitt to study olfactory senses 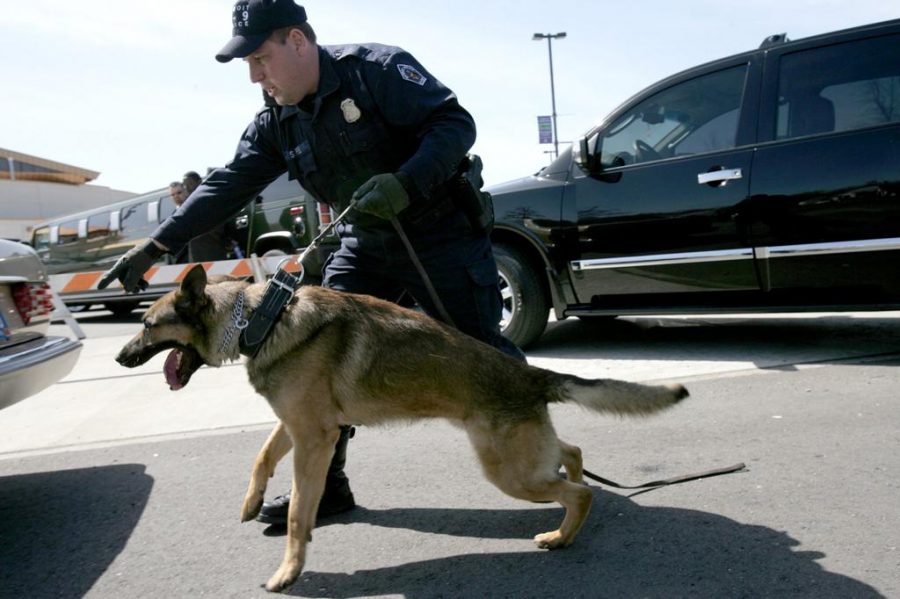 Officer Steven Piel and his bomb sniffing dog, Radar, check cars outside of Fellowship Chapel in Detroit, Michigan, after there were rumors of a bomb threat, Wednesday, April 19, 2006. ( Susan Tusa/Detroit Free Press/KRT)

By Megan Tingley / For The Pitt News

A rescue dog approaches a building collapsed into a pile of rubble. It has one mission: find a missing person.

How does it know where to walk?

The goal of a Pitt-led, multi-institutional project is to understand how animals use their sense of smell to recognize and navigate toward odors. On Sept. 21, the National Science Foundation awarded the team a three-year, $6.4 million grant as part of President Obama’s BRAIN Initiative, which provides federal funding for research aimed toward understanding the brain. Bard Ermentrout, a mathematics professor at Pitt, and one of the study’s principle investigators, said the project could lead to advancements in emergency rescue procedures. The grant and the study will run until 2018.

The team’s ultimate goal is to determine how animals can recognize the smells of mates and food sources to see how the brain processes these signals. Ermentrout said he will develop algorithms to describe these behaviors.

According to Ermentrout, if there’s a more intuitive way to find landmines in Africa than by following rats on leashes, he’s determined to find it.

“If you want to find a body in a building or land mines it would be nice if we could develop a more mechanical way of doing so,” Ermentrout said.

At the Ideas Lab, a branch of the National Science Foundation that debuted in 2014 in Virginia, researchers from diverse backgrounds collaborated to resolve scientific questions by tackling them from different angles. The researchers met at a workshop focused on olfaction and later submitted a formal interdisciplinary research proposal for the project.

According to co-principal investigator Justus Verhagen, associate fellow of the John B. Pierce Laboratory, a health lab at Yale, the researchers will determine properties of odors in an environment, including the way odors move through the air. The researchers will use this information to examine animals’ receptors and the olfactory bulb to see how it affects animals’ navigation.

Because each step of the project requires a different area of expertise, the team is composed of researchers with a variety of backgrounds, including psychologists, engineers and mathematicians.

“It takes a lot of folks from different strokes,” Verhagen, a neurobiologist primarily focused in food flavor neuroscience, said, adding that the researchers “could all complement each other in solving this important puzzle.”

In the future, more efficient machines could track odors in situations where search and rescue missions currently rely on animals — like using bloodhounds to find missing bodies in a disaster zone, according to Ermentrout.

Jonathan Victor, a neuroscience professor at Weill Cornell Medical College and one of the researchers working with Pitt, said the researchers could also use their work to prevent problems related to insect activity.

“Understanding how insects use odors to navigate may lead to new strategies in control of insect-borne diseases and improved agriculture,” Victor said.

Most of the researchers met for the first time at the National Science Foundation’s Ideas Lab initiative when they submitted proposals for projects on olfaction. Other workshop topics have included providing a more precise measurement of gravity and improving teaching in STEM fields.

“Most of us only met for the first time during the Ideas Lab, and it’s hard to imagine a collaboration like this forming in any other way,” Victor said. “It’s a particularly exciting way to develop ideas and collaborations, and I am optimistic that it will achieve its promise.”