Kissing for keeps at Heinz Chapel 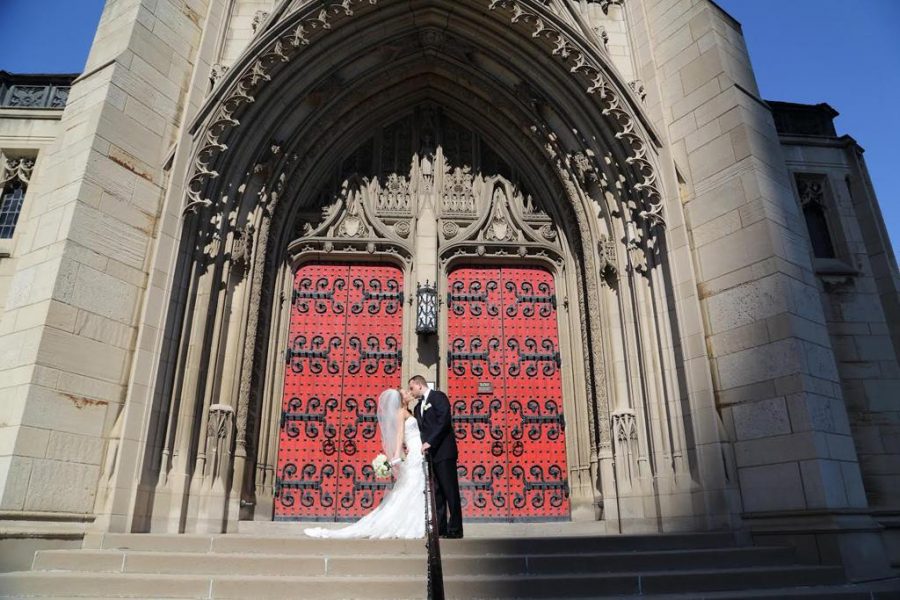 Kissing for keeps at Heinz Chapel

hen Bill Young overheard a Pitt Pathfinder telling a student about the legend of Heinz Chapel, he thought the legend was a myth.

The young director of Communication Services at Pitt listened as a tour guide told a prospective student and his grandparents that couples who kiss on the steps of Heinz Chapel are destined to wed there and enjoy a long marriage.

The elderly couple turned to each other with knowing smiles.

“It’s absolutely true,” the grandparents, who wed in the Chapel, said.

Tonight, blossoming couples have a chance to try their hand at working the legend’s magic. From 7:30 to 9 p.m., Heinz Chapel is holding its recurring “I Do, I Do … Again!” event where Pitt couples can practice their walk down the aisle.

This free event began four years ago, according to Patricia Gibbons, director of Heinz Chapel, and anyone can participate, married or not.

“We have a live organist with a rose for all of the couples,” Gibbons said. “You can have your photo taken on the altar and recess down the aisle with music.”

Ashley Sosso and Andrew Chikes had their chance to walk down the aisle for their wedding last April, after dreaming of getting married at Heinz Chapel since they met at Pitt School of Law.

“It had special meaning to us, we both went to Pitt undergrad and law school and started dating when we were seniors in law school,” Chikes said. “We met in January 2007 while I was rushing an honor fraternity and she was a member of Phi Sigma Pi.”

The couple got married at the chapel on April 12, 2014. Heinz Memorial Chapel holds 150 to 200 weddings each year, according to Gibbons.

Although the aisle is open tonight, most nights it isn’t available for anyone to walk. Normally, Gibbons said couples have to wait a year and pass strict criteria before they get a chance to get married in Heinz Chapel.

To marry at the chapel, at least one member of the couple must be either a Pitt student, alumni, staff member or an employee of H.J. Heinz Company or UPMC. All immediate family members, such as grandparents, parents, brothers and sisters, of such individuals are permitted to marry at the chapel as well.

Each wedding has a one hour and 45 minute time slot for the ceremony and photos, with an extra 45 minutes beforehand for set-up.

Sosso and Chikes said the fight for a spot at Heinz Chapel was worth it.

“[Heinz Chapel] is the center of a very special place, ” Chikes said.

He led her on a scavenger hunt to three places that held significance to the couple, such as the William Pitt Union, where Chikes remembered meeting Sosso, and David Lawrence Hall’s second floor, where Sosso remembered meeting Chikes. At each location Sosso found one of her best friends holding a letter with a clue to her next destination.

Sosso’s last clue was, “Go to the place where we had planned on getting married.” When she arrived at the chapel, Chikes was there waiting for her.

“I was standing there on the steps … coincidentally there was a concert going on inside of the chapel, and the front was all lit,” Chikes said.

As the snow fell on the steps where he stood in the bitter cold, Chikes proposed to Sosso and kissed his future bride.