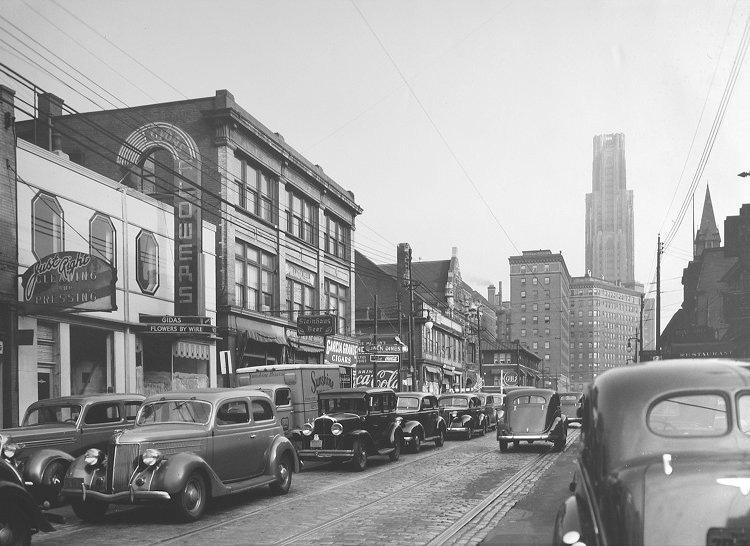 I know Oakland isn’t paradise, but I didn’t expect the disgusted look on my Penn State friend’s face as we walked down Forbes Avenue toward Essie’s Original Hot Dog Shop.

“How can you live here?” The question caught me off guard. Having spent more than a year living on campus in Oakland, I barely noticed the side-effects of the dense population that annoyed my visiting friend so much.

But when I think about it, there’s definitely something to my friend’s point of view.

From the supposedly unpleasant neighborhood environment to the brutalist style of buildings like Wesley W. Posvar Hall and David Lawrence Hall, our campus can be off-putting. Some critics even connect the urban atmosphere to what they see as low student and alumni unity and poor school spirit. The pondering on threads like College Confidential, a community forum for college-bound students and their parents, paints Pitt’s urban campus in a disconcerting light. Parents wonder if the typical, enclosed campus would serve their students better than the urban atmosphere that forces them into bewildered independence.

Of course, the night after a Pitt win, no one can avoid the pull of the glowing victory lights and feel anything but proud when calling Pitt and Oakland home. But, overall, there’s still some truth in saying that the student body’s school spirit — especially at football games — is underwhelming.

It certainly doesn’t help that our region is home to three of the five universities with the highest average home football game attendances in 2014 — Ohio State University, University of Michigan and Penn State. By comparison, while Pitt comes up fifth in the nation in the category of “largest average attendance increase from previous year,” we don’t make the list when it comes to highest attendance overall.

Interestingly, all three of these schools — as well as the slightly less popular, yet similarly rabid University of Notre Dame and West Virgina University — have exactly what visitors to Pitt’s campus complain about most — an enclosed urban campus.

There seems to be a connection between the school’s campus and the amount of conventional school spirit.

Pitt is urban in the truest sense of the word. And while our campus may not create the kind of belongingness that comes with burning couches for beloved sports teams, it more than makes up for it in the kinds of connections and the academic community it creates.

Where Pitt’s academic buildings blend in easily with the rest of Oakland, these schools have self-contained, strictly defined campuses. Most of them are in cities smaller than Pittsburgh and have larger student populations with a higher percentage of undergraduates.

Through our athletics, Pitt flows into the city of Pittsburgh — particularly when it comes to our football team. Since the December 1999 demolition of Pitt Stadium, the Panthers have shared Three Rivers Stadium and now Heinz Field with the inescapably popular Steelers. Ironically, this facility-sharing is often used to explain supposedly anemic attendance at Pitt football games. After all, average attendance at Pitt games in Heinz Field has been almost 4,000 lower than the average at Pitt Stadium.

In any case, the movement from an on-campus to an off-campus venue didn’t help the sense of Pitt community. We’re no longer physically centered on Pitt football, and what we still have here says a lot about the new direction of Pitt pride. One of the best medical centers in the United States, UPMC, sits on the hill directly below where the Pitt Stadium once stood. The 12th best public law school in the United States sits unassuming in our midst on Forbes, and Pitt School of Medicine is listed at an intimidating 11th best in the world, according to the 2014 Academic Ranking of World Universities in Clinical Medicine and Pharmacy.

Pitt’s Oakland campus gives us something to rally around beyond highly-visible sports teams. No matter how good the football program is or how many student and alumni fans it draws, it won’t be at the center — physical, emotional, mental or otherwise — of the Pitt experience.

We’re connected to Pittsburgh and Oakland in a unique and important way. Oakland exemplifies the best implications of the “urban” moniker: professional, engaged, ambitious and — although connected — remarkably independent. And, living in this stew of adjectives, we as Pitt students absorb much of its dynamism. A decentralized campus confirms one of former Chancellor Mark Nordenberg’s favorite things to say to students about the community we coexist with: “the city is our campus.”

As students of both a university and a city, we benefit both from one of the country’s largest endowments funding world-class academic programs, as well as one of the most dynamic, fascinating and rejuvenated cities on the East Coast. And regardless of when you choose to move off campus, you can’t experience Pitt without experiencing at least a few of Pittsburgh’s kaleidoscopic neighborhoods outside of Oakland. Oakland living acclimates us to working and existing in the real world, a far cry from the close, clannish mentalities that the big state schools can often produce.

True, we’ll never have the experiences of students at schools like Penn State of living four years only interacting with other people inside the university. We’ll never feel the sense of community that comes from belonging to the only significant group of people for miles around. The question, however, is: why would we want that?

My visiting friend from Penn State seemed less troubled by the Oakland environment after indulging in a plate of O fries. He was taking part in something that makes Pitt as great a school as it is — half the Pitt experience is off-campus, unofficial and independent. While the O is a part of it, the school pride that encompasses Oakland — and even the city of Pittsburgh — is just as unexpected and just as integral to the Pitt community.

Henry primarily writes on government and domestic policy for The Pitt News.