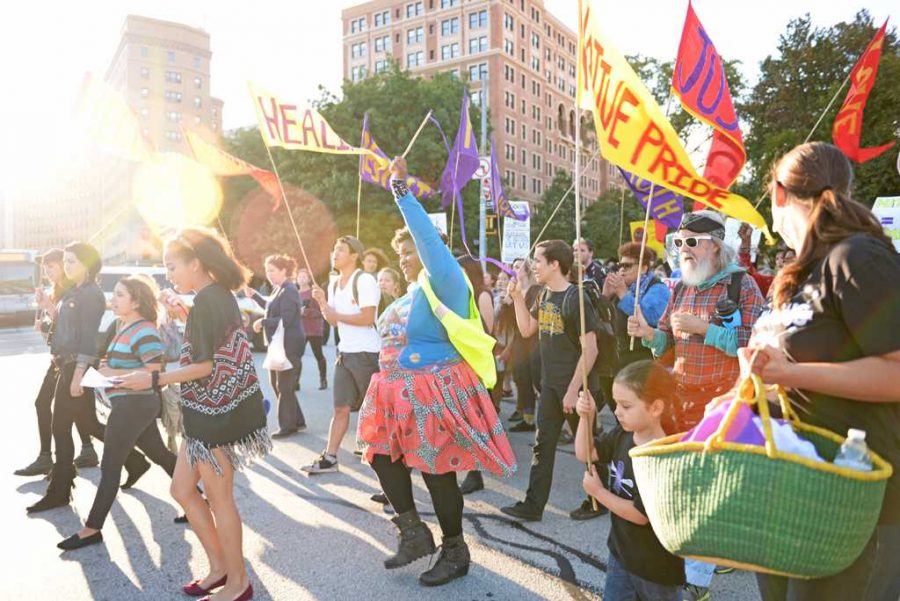 With pennants and ribbons waving, marchers shut down Bigelow Boulevard as they brought native people and their supporters back to their indigenous roots.

At Pitt on Monday, about 200 students and community members gathered in front of the Cathedral of Learning at 5:30 p.m. to march against Columbus Day and celebrate a repurposed holiday — Indigenous Peoples Day. The crowd marched from Bigelow Boulevard outside the William Pitt Union to the Christopher Columbus statue outside Phipps Conservatory, where they gathered to listen to speeches and poetry about the devastating effects of colonization on indigenous people, and ways they can still help today.

Indigenous Peoples Day is the counter-holiday to Columbus Day, and is meant to celebrate the people native to the Americas — rather than Christopher Columbus, the Spanish explorer who was one of the first to colonize North America. For Ruth Martial, the lead organizer of the event and member of Indigenize Pittsburgh, the group that organized the march, celebrating Columbus Day is like celebrating the violence, genocide and sexual assault that Columbus and other early colonizers inflicted on native people.

“People ask, ‘What are you celebrating? What does it mean?’” Martial, 32, and of mixed European and Hodinöhsö:ni‘, or Iroquois, descent, told the crowd. “I don’t even think there’s a debate about Columbus — I’m tired of hearing about him.”

Minneapolis, Minnesota was the first major city to officially recognize Indigenous Peoples Day, when its city council voted on the measure in April 2014.

Pittsburgh City Council followed suit that same year in December, when it voted to recognize Oct. 12, as Indigenous Peoples Day “in order to promote tolerance, understanding and friendship, and to overcome prejudice and eliminate discrimination stemming from colonization.”

Kent Bey, 45, from the Hill District, usually celebrates the day at small gatherings with family and friends, but said this year was more about educating people in the general public.

“I support indigenous rights and self determination,” Bey said. “A lot of us have an interest in being here. Columbus Day hides who we are.”

Kai Pang, a senior philosophy and economics major, had the opportunity to speak to the crowd about supporting Unist’ot’en, an indigenous clan in Canada working to stop oil and gas corporations from building pipelines through their land. The clan has maintained its original legal system and culture, and calls upon other indigenous people to show their solidarity in the fight against industrial companies. Pang learned about the camp from a friend this summer, and has spent the fall working to find tangible ways to help them.

The crowd posed with a banner reading “Solidarity with Unist’ot’en from Pittsburgh,” and Martial passed around a bucket for donations.

“When we talk about social justice, a large topic is intersectionality, the idea that all our fights are together,” Pang said. “It was very humbling feeling the energy from so many people, both celebratory and angry.”

As the marchers turned their backs on the Columbus statue, Vanessa German read a poem, instructing the crowd to imagine a world where everyone danced instead of going to war.

As German spoke, she ignored the statue of Columbus and focused instead on the faces of the people in front of her.

“People smiled and laughed. They were using their imaginations, I could tell,” German said. “When people start imagining, you fill in the blanks with reality.”

Last year, the group held the march Downtown. For Martial’s first year in charge of the march, she wanted a more central location where the group could engage more students and partner with Conflict Kitchen.

Clara Gamalski, a food studies masters student at Chatham University and Conflict Kitchen employee, spent 11 hours in the kitchen preparing the food. According to Gamalski, they first boiled ashes before putting in the corn, and then rinsed the stalks for hours on end. The ash creates an alkaline solution that gives the corn more nutritional value, reduces toxins and improves the flavor.

“Before yesterday, I was already super glad it was a project. After yesterday, I had a greater appreciation of the importance of cultural preservation through food,” Gamalski said. “I will never think of corn in the same way.”

The indigenous food drew a lot of attention, and Dawn Weleski, co-owner of Conflict Kitchen, said the restaurant is considering a longer iteration of the same foods.

“As we’ve done in the past, we’ve tried to deconstruct and complicate the narrative of underrepresented voices, and to do that we had to go directly to the source,” Weleski said.

In the future, Martial hopes Indigenize Pittsburgh will host a traditional parade with different organizations represented on floats. For now, she is happy with the progress the group has made, but said she will keep fighting to make a better world for her five year old son, who is an enrolled member of the Aaniiih Nation.

“I want to create a place for my son to live where they do not celebrate the deaths of people like [my son],” Martial said.

Editor’s Note: An earlier version of this story said Martial’s son was of mixed descent. He is actually an enrolled member of the Aaniiih Nation. The story has been updated to reflect this change.