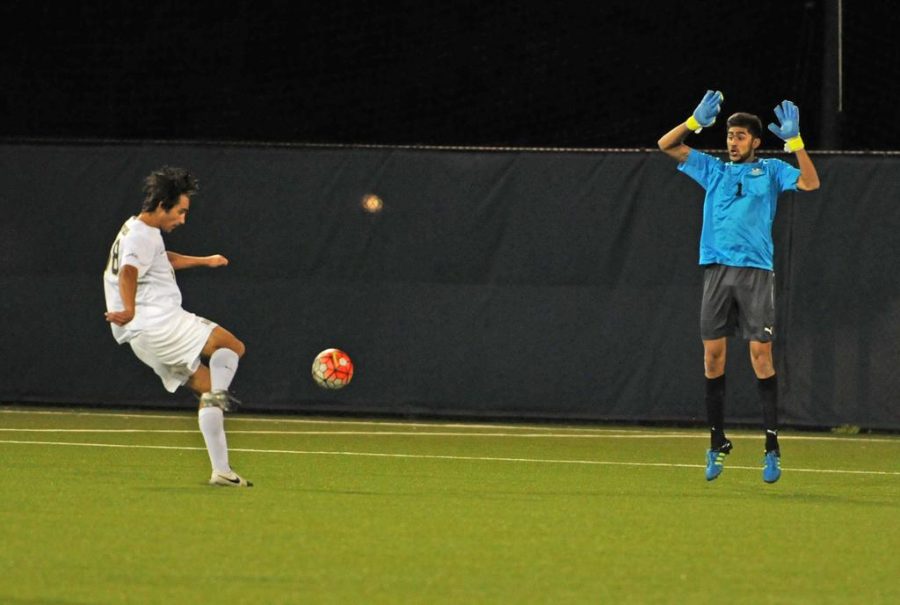 Freshman Tobias Marshall-Heyman prepares for a strike that he would unfortunately miss. Andrew Shin | Staff Photographer

To match its 24-game winless streak, the Pitt men’s soccer team has another extended drought in tow.

Lack of conversions by his team on the offensive front frustrated Pitt head coach Joe Luxbacher, who called the game a “very tough loss.”

“First half, we should’ve had three goals. We were in there the whole time and got nothing out of it,” Luxbacher said. “You have chances, and you don’t seal them in. We told the guys that comes back to haunt you.”

Sophomore midfielder Raj Kahlon dribbled across the pitch just outside of the box and launched a rocket in the 24th minute — but it flew just above the Cleveland State cage. At the half, the Panthers outshot the Vikings 5-1 and had earned six corner kicks as well.

Junior midfielder Romeo Charron launched corner after corner — eight total on the evening — but they too, were fruitless.

“We outshot them, and two or three [chances] in the first half right on the doorstep, and we don’t put it in. We go into the half 0-0, and you’re one play away from losing, and that’s what happened,” Luxbacher said.

That one play happened 40 seconds into the 70th minute when Vikings midfielder Dan Koniarczyk slipped a slow roller past senior goalkeeper and team captain Dan Lynd. The Vikings scored their lone goal on just the second shot on goal.

“I didn’t even see the shot,” Lynd said.

The goalie expressed some exasperation with giving up a lightly kicked score.

“We had six guys around the ball initially, and I didn’t see it until it was next to me. It’s frustrating giving up a soft goal, but I mean we’re never going to win if we can’t score, so I don’t know what to do about that,” he continued.

The Panthers haven’t scored since junior Kevin Murray headed corner from senior midfielder Pat Dixon in the 46th minute against Niagara last Tuesday — the only goal the Panthers have scored all month.

That’s one goal in the Panthers last four games, which translates to 400 minutes of soccer — 40 minutes of overtime included.

“We just need to find a little quality in the final third. We’ve had plenty of chances. We’re just not scoring, and against ACC teams, we need a win to get into the postseason. We gotta find a way to score some goals,” Lynd said.

“He’s hurting. We were thinking of pulling him out. He’s not nearly 100 percent, but he wanted to stay in, and he did a decent job,” Luxbacher said.

Pierre declined to talk after the game.

Luxbacher also added that Pierre is not participating in team practices, but training with the athletic staff to further rehabilitate his ankle.

The Panthers finished their five game homestand with a record of 1-2-2, 0-1-1 in conference play.

The team will head to Charlottesville, Virginia, to take on the Virginia Cavaliers (7-3-2, 2-2-1 ACC) on Friday. Scheduled kickoff is 8 p.m.