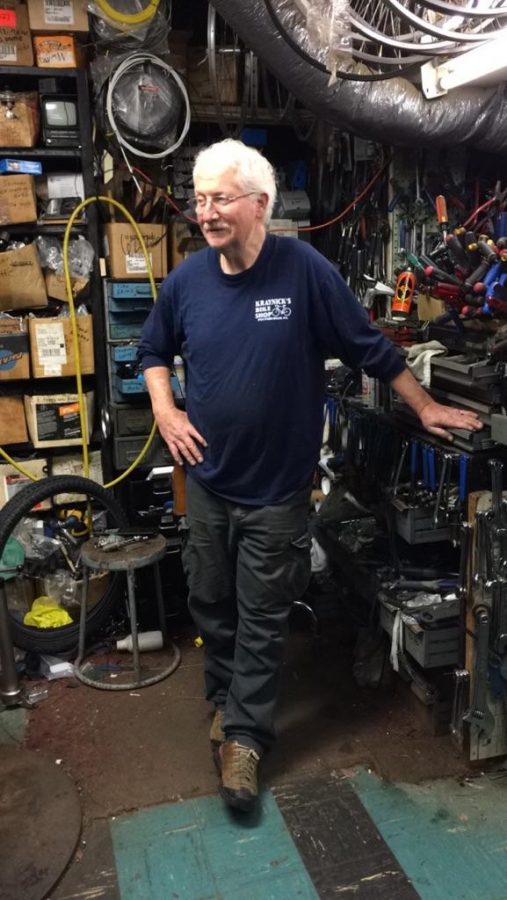 Imagine a bike shop that also acts as a community, where advice among customers and staff is as common as getting their gears fixed or wheels trued.

That vision is a reality at Kraynick’s Bike Shop in Garfield, where customers can receive free lessons on how to fix their own bikes.

Jerry Kraynick has operated the store since 1976, after relocating to Garfield that year from North Oakland, where his father, the original proprietor, opened it in 1946. Over the last 15 years, Kraynick has turned the store into a personal mission to emphasize community and learning the ins and outs that go into fixing a bike.

Although customers pay for bike parts themselves — minus lubricant, which is free — they still pay well below market price, as most of the parts are used and donated by other customers.

Kraynick’s is able to operate by charging customers so minimally for services largely because its operating costs are so low. Kraynick doesn’t employ any paid workers and owns the building, which he said he bought for next to nothing in the 1970s. Kraynick or volunteer’s direct bike maintenance, customer donations and payments for bike parts serve as the shop’s only forms of revenue.

Volunteers, who are mostly biker enthusiasts without any formal mechanical experience, come to his store to help other cyclists.

“I’m getting older, and I don’t want to work as much, which is why I need to have volunteers who can ensure this continues into the future,” said Kraynick.

The store is easy to miss, sandwiched between a cafe and a performance art gallery on a nondescript block of Penn Avenue in Garfield. Inside, it’s larger than it looks, and creaky wooden staircases lead to two

additional levels and a basement. Everything is covered wall to wall with inner tubes, rims and fork, as the store has accumulated decades’ worth of donated bike parts.

Pittsburgh bikers can come in with anything from a flat tire to a broken chain, and Kraynick or a volunteer will not only fix it for them, but also teach them how to fix it themselves.

“The great thing about [Kraynick’s],” said Bob Walsh, a longtime volunteer, “is that it gives bikers the ability to go out by themselves on the road and know they can take care of problems they might encounter with their bike themselves.”

Kraynick, who used to be a physical education teacher, said free advice is the heart of his store. Many customers learn for the first time how to perform simple bike tasks, like changing an inner tube or oiling gears.

The goal, said Kraynick, “is that they’re able do it themselves next time around.”

True to his DIY approach, Kraynick relies on word-of-mouth advertising, much of which comes from his significant community outreach.

Kirstyn Gudknecht, a senior urban studies major, heard about the shop from some of her “experienced biking friends,” and brought in her old 1967 Schwinn Suburban earlier this week.

“I’ve been wanting to learn how to fix it up myself for a while, but never made the time to invest in it,” she said. “I walked in, and a guy named Jerry comes over immediately to admire my bike and offer help finding the parts I need.”

When she went to check out she was a dollar short, but Kraynick told her to get him back next time.

Kraynick’s goodwill extends past the shop, too. For the past four years, he has worked with the Salvation Army collecting unwanted children’s bikes and donating them to underprivileged Pittsburgh youth. As enthusiasm for the program grows, Kraynick often runs out of space to store the several hundred donated bikes.

Inside the shop, customers and volunteers of all ages and ethnicities come together to work in a collaborative atmosphere. Kraynick describes it as a community “melting pot,” unifying residents from surrounding Garfield, Lawrenceville, Bloomfield and Friendship.

A common thread of biking, Kraynick said, connects the blue collar worker with people of all different backgrounds — the young professional, the Italian-American Yinzer and the recent immigrant from Africa.

On one occasion, Daniel Cristobal, a devoted volunteer, was chatting with a customer he was helping when they realized they were both from the same village in the Philippines.

Cristobal said he considers himself part of the larger biking community in Pittsburgh. He is a Pitt School of Medicine alumnus and has been biking since he was a teenager.

“I feel like I was part of the generation of ’90s kids in the area who would just bike from Forrest Hills to Squirrel Hill for something to do,” he said.

Cristobal said he’s pleased with what the success of biking community’s work in Pittsburgh. Over the last five years the city has increased the number of bike lanes and in April Mayor Bill Peduto called for “complete” streets — a policy that would bring more bike lanes to high-traffic streets, like the Oakland section of Forbes Avenue.

Non-profit organizations such as Bike Pittsburgh have been key players in lobbying the city to adopt pro-biking policies. Their executive director, Scott Bricker, was named one of the “50 Most Powerful People in Pittsburgh” by “Pittsburgh Magazine” over the summer.

As the city continues to expand its biking culture, Kraynick’s shows no sign of change.

“It’s important to have a place where bikers can learn to fix their own bikes with advice from their neighbors,” said Gudknecht. “In an increasingly bike-friendly city like Pittsburgh, I hope we see more of these types of shops opening up.”

Editors Note: In Thursday, Oct. 15’s story “Good Will Biking,” The Pitt News incorrectly reported that Jerry Kraynick, owner of Kraynick’s Bike Shop, fixes customer’s bikes for free. In actuality, customers may fix their own bikes with free help, but Kraynick himself does not service bikes in his store without charge. The Pitt News regrets this error.