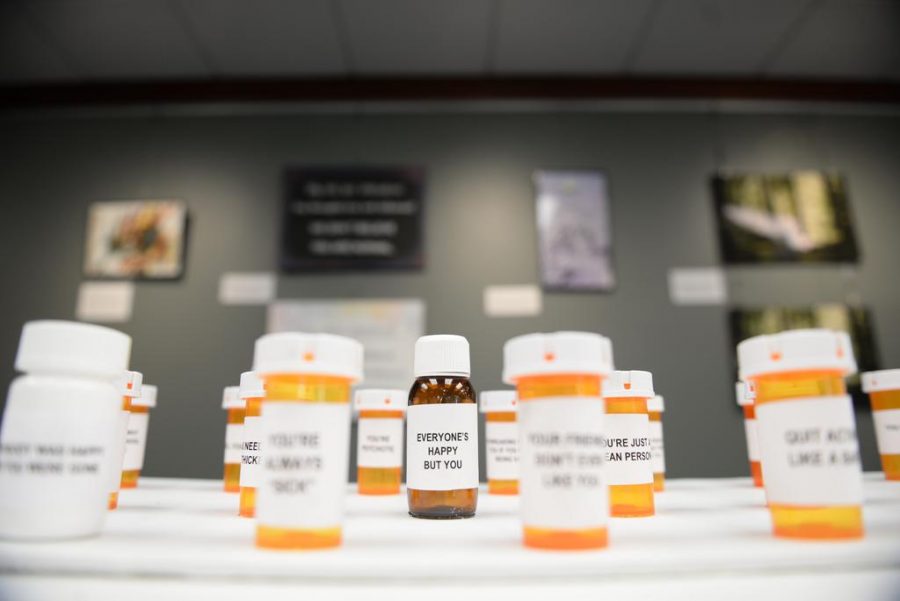 “If someone looks like they could use a hug, give one,” a sign advises in front of the Conney M. Kimbo Gallery on the main floor of the William Pitt Union.

That sentiment is the spirit of the student exhibit, which runs until Friday, Oct. 30. The collection of student narratives detail experiences with mental illnesses like bipolar disorder, depression, anorexia and anxiety in an effort to spark a larger conversation about mental health at Pitt.

The Pitt Program Council organized the exhibit as part of a larger push by the University to address mental health on campus, according to PPC member Amanda Chan, a senior who works at the Kimbo Gallery desk .

In order to underscore the diverse nature of mental illness and its effect, the exhibit’s submissions included a wide range of mediums and experiences, including poetry, visual art and sound recordings. There are also barcodes which students can scan on their smartphones to view multimedia accompaniments on the Pitt Stories Untold website, which will permanently house the student’s work.

Although deeply personal, the exhibit welcomed all voices, according to contributing artist Kevin Tang, a senior studying neuroscience and one of the exhibit’s four curators.

“I do not believe any artist was nervous about putting forward their own personal and powerful works. We welcomed all levels of skill and offered anonymity to any student who wished so, and really emphasized that it would be a safe space for the artists to share their stories,” said Tang. “Interestingly, a good percent of students did not wish to be anonymous, which said loudly how much they also wish to fight the stigma against mental health.”

PPC collaborated with an array of campus organizations to find submissions, including the Honors College, Talk About It, Active Minds and the University Counseling Center. Amongst the art, the gallery offers brochures and flyers on mental health assistance available to students at Pitt.

The largest piece in the exhibit, “Empty bottles, empty souls,” features three rows of empty pill bottles. Instead of labels, Kayla LeMaster, the artist wrote the hurtful things that people have said to her about her struggles with depression.

“It must suck to want to die,” reads one of the labels. “Nobody cares about your life,” reads another.

“‘Empty bottles, empty souls’ was my favorite in the exhibit,” said sophomore accounting major Lori Bennett, who visited the exhibit last Thursday after a friend told her about it. “I think if nothing else this will get people talking about mental illness and help students realize that their words can have a powerful impact,” Bennett said.

The submissions aren’t always about the artists’ battles.

Sam Mostofa, a junior psychology and neuroscience major, wrote “Dear Abrar” about her younger brother who has lived with depression since he was just seven years old.

A picture of Mostofa and her brother, as well as his toy car, accompany the letter, tangibly reminding the audience that depression affects young children as well as adults.

“I wanted to make the point that depression does not always have a ‘why’ answer,” said Mostafa. “Depression isn’t picky. It affects the young, old, boys and girls, anyone. No one asks a cancer patient ‘why’ they have cancer.”

Some of the pieces in the exhibit are more conceptual than literal. “Deterioration,” by senior studio art major Sam Coutch, features three miniatures of an individual whose body is overrun by fungi and weeds, showing the “deterioration” of general motivation accompanying mental illness.

Another painting, Tang’s “Persona,” features an individual whose face is composed of several masks, representing the need people with depression feel to cover up their symptoms rather than share them.

Some exhibits are more literal, like studio arts major Maya Elaine’s submission, “How a Panic Attack Feels,” that consists of a series of 11 photographs showing woman slowly succumbing to an attack while reading a book. She grows more visibly distressed in each progressive picture until she is balled up and lying on the ground.

Other pieces speak to the strength of students who battle mental illness. “Clarity,” by senior English and Philosphoy major Victoria Sterling, is an abstract painting of leaves and seashells. It conveys painting as the artist’s healthy way to cope with anxiety, as opposed to self-medicating with drugs or alcohol.

“Students may recognize the benefits of art therapy and may seek appropriate therapy if they are dealing with any of these mental health issues. So, there is a cathartic element to the exhibit as well,” said Tang.

Although the subject matter of “Stories Untold” is generally dark, the simple fact that the artists have survived to share their struggles and educate others creates a sense of hope which pervades the artwork.

“I think the exhibit has helped me realize that mental illness is not something you either have or don’t have, but a spectrum,” Chan said, “and hopefully it does that for everyone who comes to see it.”