After trying offseason, Wilson ready for impact on court 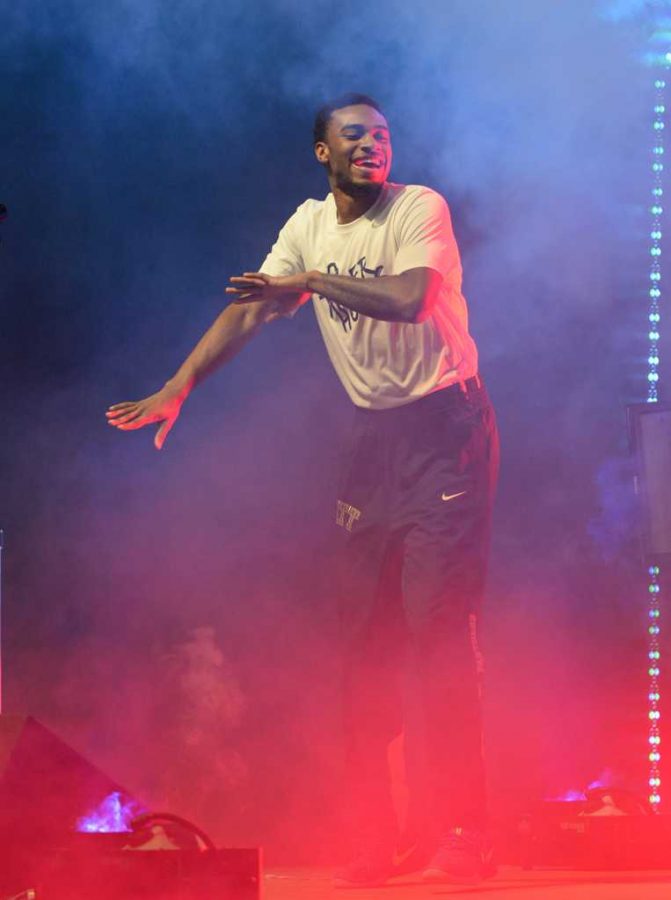 Before the NCAA eventually deemed him eligible for collegiate play in September, it challenged the freshman guard and his teammates’ high school course loads.

“When we heard they weren’t counting our work, we were pissed basically because we were doing work and then some,” Wilson said. “It was just a bunch of stuff that I think no kid should go through.”

Wilson, who attended Our Savior New American School in Centereach, New York, was one of several prospects from his high school that has had trouble passing through the NCAA Clearinghouse. According to the NCAA Eligibility Center’s website, Our Savior is currently under an “extended evaluation process” to determine if it meets the NCAA’s academic requirements.

The most notable of Wilson’s Our Savior New American teammates is Cheick Diallo, a forward who committed to Kansas in April but who the NCAA has not yet cleared.

Wilson was frustrated, but still confident that he would obtain eligibility.

“I was mad because [the NCAA] kind of told us at the end of my senior year that I was ineligible,” Wilson, Pitt’s sole incoming freshman this year, said. “As the months went on, I kind of let it work its way out by itself.”

Players who are not cleared oftentimes have to take the junior college route, attending a school with lower qualifications to improve their academic standing. Still, Pitt shared Wilson’s confidence that he was in no danger of that fate.

Pitt head coach Jamie Dixon thought all along that Wilson would come out clean, but that “it would take some time.” Wilson was cleared in September.

“We had great confidence that Damon was going to be fine academically,” Dixon said. “It’s always hard when you have a guy who’s a good student being questioned about his academic eligibility.”

The NCAA’s requirements for incoming Division I players include a minimum GPA, SAT or ACT score and a specific amount and type of courses taken.

The qualms the NCAA had, Wilson said, was with the “criteria” of work that he did in high school, but he did not expand on that definition.

“[The NCAA] said the work we were doing wasn’t the criteria work that they wanted, which is not true,” Wilson said. “We were in the classrooms every day, 24/7 doing work, staying after hours doing work.”

The examination consisted of a thorough probing of Wilson’s high school workload, scouring all of Wilson and his teammates’ coursework.

Though his confidence didn’t wane, Wilson said it helped that he was in Pittsburgh for much of the saga, as Pitt’s coaches constantly kept him updated regarding his current standing. Pitt’s compliance department would receive word about Wilson’s status from the NCAA and relay it to Dixon.

“It was good to know that they were on my side looking out for me as it went on,” Wilson said. “Any updates, they would always run and tell me, so I was always updated instead of wondering what’s going on.”

During the lengthy process, Wilson received another setback when he separated his shoulder during offseason workouts at the end of August. The injury kept him out for six weeks, though Wilson said he now feels the injury is 100 percent healed.

Now that Wilson’s off-the-court trials and tribulations are over, the focus turns to the hardwood.

Wilson, who ranked as the 100th best prospect in the 2015 recruiting class, according to Rivals, will likely compete for minutes at the backup point guard and shooting guard spots. James Robinson, Pitt’s starting Pitt point guard, looks forward to playing with Wilson.

“He’s athletic, he quick, he’s confident in himself,” Robinson said. “We’re going to be able to be out there together. He may be in, I may be in and I think we’re just going to support each other and in practice we’re going to compete.”

During the offseason, Wilson said he worked on improving his speed and jump shot. Of his jump shot, Wilson said it is now “a whole lot better.”

In playing against his teammates, Wilson has noticed a major difference in the physicality of the game. As Wilson acclimates to college basketball, he said his intelligence and athleticism will guide a smooth transition to the college game.

“I feel like I’m a very high-IQ player, so that will help me out, and my quickness helps me out,” Wilson said.

“I think he’ll fit in right away. I’ve hung out with him off the court, we’re pretty close,” Smith said. “He’s a real mature freshman, you don’t see that a lot.”

That acclimation process will continue throughout the offseason and will only get tougher when the Panthers take the court for their first regular season game next month.

Despite all he’s been through in the past few months, Wilson is prepared to make good use of his eligibility.

“I think the sky is the limit,” Wilson said.