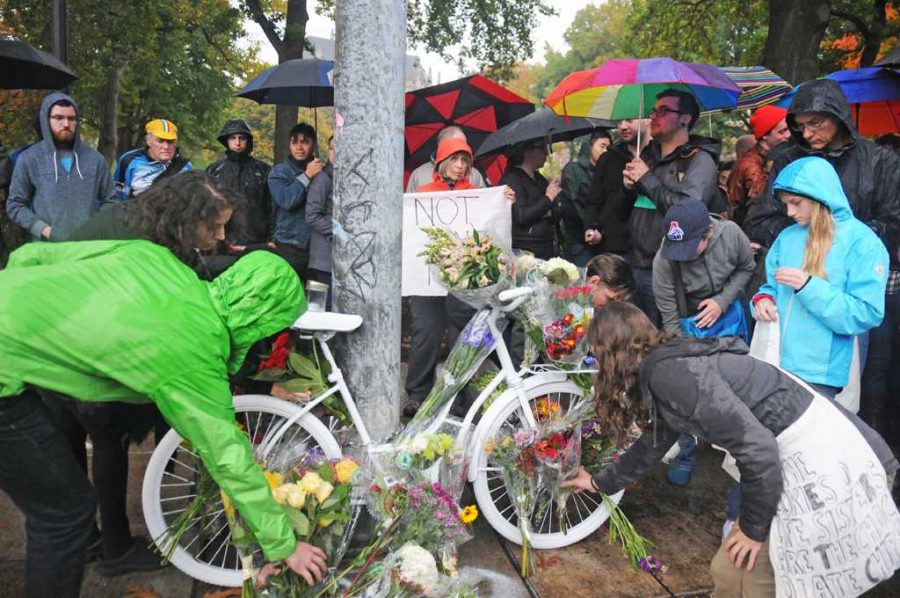 Susan Hicks was always learning, often traveling and never limiting her capacity for empathy or her dedication to students.

Hicks, 34, was assistant director of academic affairs at Pitt’s Center for Russian and East European Studies. She died Friday after being hit by a car in Oakland while riding her bike home from work.

She was an intellectual who moved quickly from graduate school at Pitt to an administrative position at a young age, according to her colleague Andrew Konitzer. Hicks was also an avid traveller and spent time in Serbia, Russia and Puerto Rico.  In Pittsburgh, her friends recall that Hicks loved the outdoors and biking, and was highly involved in social and activist circles.

Konitzer, the director of the Center for REES, worked closely with Hicks in their small office with a six-person staff. He saw Hicks’ dedication to her students firsthand, as well as to activism in the community and world.

“She was not the type to sit back and watch things that she was unhappy with unfold,” Konitzer said.

Konitzer said Hicks was “always fighting for the little guy.”

Hicks and Konitzer went on tours with REES’ visitors to incubators and met people who Konitzer described as “great minds” around Pittsburgh. According to Konitzer, Hicks would always comment, “This is great, but do poor people have access to this?”

“On a scale between dogmatic and pragmatic, I think Susan was right in the middle,” Konitzer said. “She came into something with ideas, of course, everyone does, but she would allow her ideas to change as reality changed.”

Hicks taught a global energy program, where she travelled with students to visit drilling companies in Washington County, anti-drilling non-governmental organizations in Pittsburgh and multinational companies and lawmakers in Moscow, Bulgaria and Washington, D.C.

“She could see all parts of the problem all the time,” Konitzer said. “She was really empathetic, you know? She felt it.”

Courtney Weaver, a student who worked closely with Hicks, said Hicks connected with her students beyond her basic duties as an adviser.

Weaver, a senior political science and international area studies major, said when she was working three jobs last semester, “[Hicks] was the only person who noticed or cared that I was really burned out.”

Their conversations would last over an hour, as they talked about everything from capstone courses to Weaver’s adventures in Ukraine.

“She was so interesting to talk to. Pretty much everything you talked to her about, she would have something to add to the conversation,” Weaver said. “She was extra passionate about her work. She just wanted to share that passion.”

Hicks once took the time to help Weaver step-by-step after her computer froze and deleted a 20-page paper due the next day.

“She had better things to do than sit there and troubleshoot with a student,” Weaver said. “She just wanted her students to succeed and do well.”

At a candlelight vigil on Saturday, Oct. 24, more than 200 people gathered in front of the Carnegie Music Hall in remembrance of Hicks. Across the street, at the site of the accident, Hicks’ friends and family left candles and flowers near a white bike chained to a telephone pole in her honor. Similar “ghost bikes” have appeared around the country as a way to remember those killed while cycling.

Erica Hom, who had Hicks as her adviser for the past three years, said the turnout for the vigil visualized Hicks’ impact in Pittsburgh.

“I see people from all of my classes that I had with this department. People loved her so much,” Hom, a senior studying linguistics and Russian and east European studies, said.

During a second memorial in Hicks’ honor Sunday night at the Vietnam Veterans Memorial in Schenley Park, her friend Dan Warner played accompaniment on his acoustic guitar as he and the congregants sang, “No Rain,” by Blind Melon.

“She swore she couldn’t sing, but would go wild in sing-a-longs, and dance, even to acoustic guitar.” Erika Fricke, Hicks’ friend, said.

Hicks’ friends and family held each other as they swayed with the song that used to make Hicks dance. Some people wiped tears off of their cheeks, while others smiled — it was the first day without rain all weekend.

“It’s also very representative of her,” Warner said. “It’s about a person sitting around reading books.”

Warner, who travelled to Puerto Rico with Hicks this past summer, said Hicks was a “really deep person.” She knew how to speak several languages including Russian, Sakha — a Turkic language — and most recently had started learning Turkish.

Fricke said her favorite thing about Hicks was that she was always up for a good debate or conversation.

“Not for it’s own sake, and not in order to conquer,” Fricke said, “but because she loved the idea that conversation is what allows us deeper understanding of the world, ourselves and others.”

Fricke remembered when she and Hicks once got trapped in a cemetery on a bike ride.

“She didn’t bother with obstacles,” Fricke said, “rather than ride around, she threw my bicycle over the top of the fence and we climbed over the sharp-pointed iron gate together.”

In an email to Fricke, as Hicks was pondering Macbeth’s “Tomorrow, tomorrow, tomorrow,” soliloquy, she wrote, “if life is but a walking shadow that simply passes, why do we put so much importance in anything? Life goes on, the world goes on, regardless of us – and that’s not ‘fate’ so much as the march of time.”

Konitzer will return to the office without Hicks on Monday. He said one of the most difficult things will be seeing her door with her name plaque, knowing she’s not inside.

“I’ve been thinking about it in terms of a mosaic,” Konitzer said. “The mosaic changes its image because of its parts. If one of those parts is gone, it completely changes the entire picture.”

Fricke and Konitzer said Hicks took the time to see the bigger picture, and then let her reflections change the way she lived.

“But once she’d realized a decision was correct for her, she never feared acting on it. She asked out the guy. She bought the house. She swam to the island. She threw the bike over the fence,” Fricke said in an email. “She really lived well.”

Members of the Pitt community will host a memorial for Hicks 9 a.m. Oct. 26, in Posvar Hall. Due to a booking complication, Konitzer said they haven’t determined the room number yet.