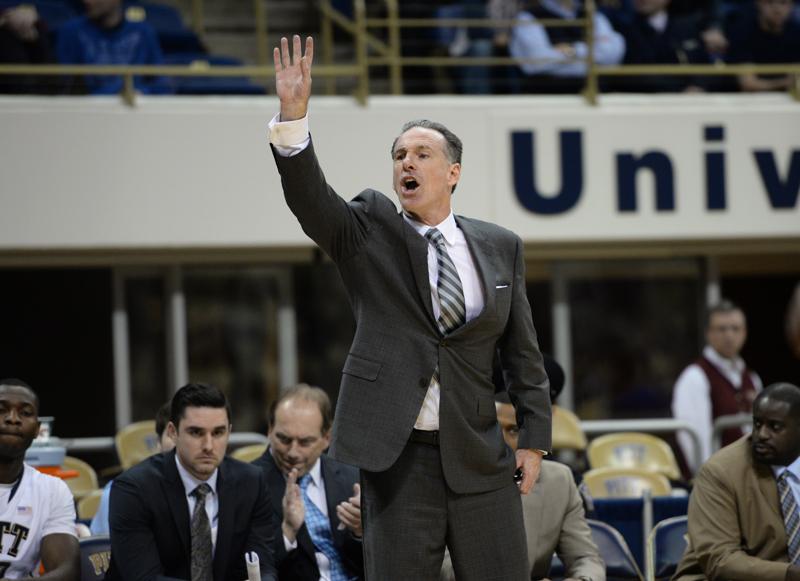 Trailing by one point with less than 15 seconds left against Notre Dame last season, James Robinson took the ball to his right, spun and hit the game-winning floater.

The point guard’s basket may have began with his natural ability and strength, but head men’s basketball coach Jamie Dixon’s love of advanced statistics and analytics subtly guided the play.

“We ran that last-second play against Notre Dame because we had that statistical evidence in our minds,” Dixon said.

That concept — scouting to maximize player’s skills — isn’t new, but it has increased in popularity with the rise of advanced metrics. This practice allows coaches to create plays tailored to their players’ strengths and has progressively gained popularity over the past five to seven years.

Dixon has been interested in basketball statistics since his college days at Texas Christian University, where he did a project on various statistics in the NBA before official tracking was popular..

“I’ve always been enamored with numbers as they relate to sports, specifically in basketball,” Dixon said.

The topic and its hidden benefits also piqued the interest of Jason Richards, Pitt’s video coordinator and director of analytics, when he got his master’s in business administration at Pitt after an injury ended his short NBA career.

Together, Dixon and Richards have created a comprehensive analytics program for Pitt, including a stat sheet that tracks 38 different statistics each game.

“On a normal stat sheet you have your rebounds, your points, your assists. But we have a stat sheet that we use for each game that has 38 statistics, whether it be screening assists, a hockey assist — which is the pass before the assist — deflections, dives on the floor,” Richards said.

Richards said the statistics provide “numerical values that are good indicators of how well the team is playing.”

Every coach isn’t as quick to welcome this technology into their roster, according to Ken Pomeroy, an expert in advanced metrics and the creator of kenpom.com, which maps tempo-free statistics for every Division I team.

“Not everybody’s on board. And you can kind of predict who is more accepting of it by how old they are,” Pomeroy said.

Pitt’s analytics operation is not just Richards — it’s a collaborative effort, as Richards has a staff of nine managers that compiles the stat sheet during games.

“After the game or even at halftime, we know who has been the most efficient player on our team, and it can help with certain lineups, who we want to put together,” Richards said.

The desired result of compiling the stat sheet, Dixon said, is to quantify the team’s priorities, which ideally helps players focus on those areas.

“We try to emphasize to our guys that those are the things that win games. By us making them important, hopefully they make them important,” Dixon said. “By putting a number on it and letting our guys know where they stand, it’s our hope that we get the message across.”

Part of Pitt’s preparation from game to game largely relies on Synergy, which tracks every possession of every game and is divided into a number of categories, including play types and player tendencies. It can also track individual choices, such as if a player prefers to drive right or left.

“In a short time we can prepare our team to take away some things and see what they emphasize,” Dixon said.

The team found forward Jamel Artis, for example, shoots more efficiently from the 15- to 17-foot range. Based on that knowledge, Pitt tweaked its offensive strategies to put Artis in positions to take those shots.

“You take into account analytics because you see where guys are most effective on the floor,” Richards said. “Whatever level you’re at, some of the best coaches put guys in places where they’re going to succeed the best.”

Beyond a game-to-game basis, Pitt has also utilized analytics when scouring the transfer market.

The staff took valued Coppin State transfer Sterling Smith, for example, because it found that Smith was one of the most efficient guards in college basketball, according to Synergy. That abundance of information makes transfers even more intriguing, Dixon said, though he believes high school and prep recruits will receive similar treatment in the future.

Though the advantages of analytics, ironically, are not quantifiable, Pomeroy said it give teams an edge in preparing for their next opponent, and in learning their own capabilities.

“It’s obviously not going to turn a 15-win team into a 22-win team. It’s not that valuable. But in games that are very competitive and very close, it figures to give the teams that are into these statistics a slight advantage,” Pomeroy said.