Pitt cruises to 80-50 victory over Gannon in exhibition 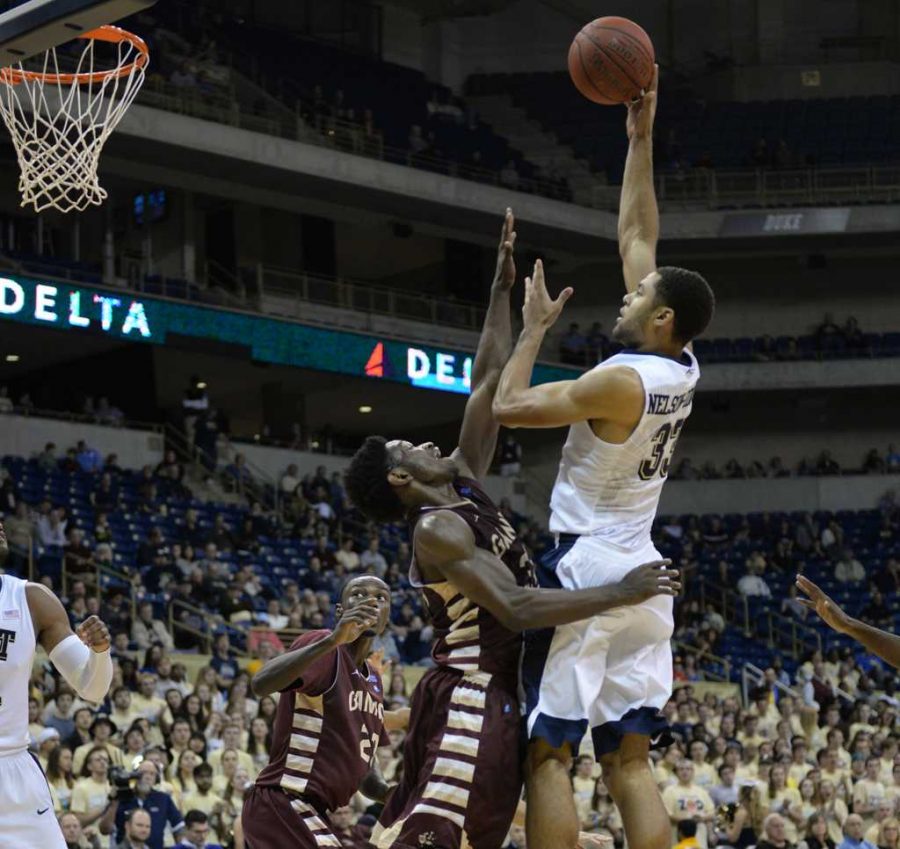 It might not have counted, but the Pitt men’s basketball team surged on Friday night.

With the season opener against Gonzaga approaching next week, the Panthers took the court for their first and only exhibition game, defeating the Gannon Golden Knights 80-50 at the Petersen Events Center.

Though Gannon, a Division II opponent located in Ohio that won the PSAC last year, didn’t provide Pitt with a formidable challenge, the Panthers were nonetheless pleased to play in front of a live crowd, regardless of the opponent.

“When you play in a game, the lights and people are watching, it’s just a different thing,” Dixon said.

Both teams got off to a slow start, as neither team netted the first point of the game until 16:16 remaining in the first half. The Golden Knights fouled junior forward Jamel Artis on a drive to the hoop and converted one of two free throws.

Artis, Pitt’s leading scorer last year, did not start, as Dixon instead opted for Chris Jones at the small forward spot. The starting lineup instead, from point guard to center, was James Robinson, Sterling Smith, Chris Jones, Michael Young and Alonzo Nelson-Ododa.

Artis, though, did play 21 minutes in the game. He finished tied with Robinson and Cameron Johnson for most points, scoring 13 points off 5 of 7 shooting.

Dixon based the decision on defense and rebounding, he said.

“We’ve been preaching all year long, all offseason, all fall about best defensive players, best rebounders, those are the guys that are going to play, so that’s the guys we went with,” Dixon said.

Gannon, answered back with a Jean Yves Toupane jumper and a Tony Boykin layup to put the team up 4-1.

“They played really hard. They kept coming at us. [It’s] not surprising,” Dixon said. “They’re used to winning, they won the league last year.”

As the half progressed, Pitt would gain the momentum, leading 13-10 with 9:37 remaining in the half. Pitt then went on 16-0 run in the next six minutes, led by nine made free throws.

Eventually, Dixon was able to slow Gannon’s offensive attack, implementing a nearly full court press on defense. Robinson expects the press to be effective, as Pitt can rotate in a variety of players in the game.

“We have a lot of bodies to rotate in and keep guys fresh,” Robinson said. “We have guys with a lot of talent and ability, so we are able to put pressure on the defensive end and when that guy gets tired, the next guy is going to come in and do just as good of a job.”

Nelson-Ododa, a transfer from Richmond, also proved to be factor, hindering Gannon from taking shots in the paint with his shot blocking ability. He led Richmond with 1.7 blocks per game last season.

“If the defender gets beat, I’ll just block the shot or at least alter it as much as can so that they’ll miss,” Nelson-Ododa said.

For the game, Pitt shot 29-39 from the line. Dixon stressed drawing fouls and getting to the free throw line is a focus for the season.

“We’ve got to be over 70 [percent] this year. We’ve got a good free throw shooting team I think,” Dixon said. “The main thing is getting to the foul line and that is what I was encouraged about today. We have to get to the line more.”

Gannon quickly brought the game closer at the start of the second half, with three pointers from CJ Asuncion Byrd and Toupane, bringing the score to 35-20.

Pitt, though, would quell any momentum, executing on offense and generating quality shots. In a stretch from 17:05 to 14:28, Pitt hit four three-pointers in a row, two from Robinson — one from Artis and one from Sterling Smith to put Pitt up 49-27. That would squash any hope, as Gannon could never really gain any offensive rhythm.

“Coach just really wants me to take open shots. Don’t force anything,” Robinson said. “When the ball swings to me and I’m open, go ahead and take the shot, so that’s what I did.”

On the game, Pitt shot 22-49, while Gannon shot 18-55. As always, Dixon stressed defense, and Robinson was pleased with how he and his teammates played on that end.

“Defense was our focal point coming into the game. Even though we weren’t hitting shots early, we knew that would come. We just wanted to maintain our principles on the defensive end,” Robinson said.

Freshman guard Damon WiIson was Pitt’s only player not to dress for the game, as he was out with a hamstring injury — an ailment that’s kept him out of practice for the past week, Dixon said.

Junior college center transfer Rozelle Nix did not play, as Dixon revealed the plan is for him to redshirt this season.

Pitt will play its opener on Friday, Nov. 13, when it travels to Okinawa, Japan, to face No. 9 Gonzaga in the Armed Forces Classic.