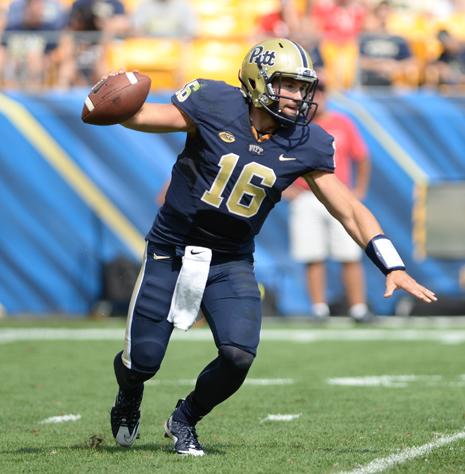 On Saturday, the Pitt football team couldn’t pull off a monumental upset, falling to the loaded No. 5 Notre Dame Fighting Irish 42-30 at Heinz Field.

But even with the loss, the Panthers stumbled upon an interesting offensive development.

With the clear success of this positional shuffling, Narduzzi and his staff should embrace even more position changes. Here are some alternate usages the crew should consider.

Scott Orndoff to fullback Former walk-on George Aston has done a solid job this season at the fullback position, particularly as a blocker, but getting Orndoff more snaps on passing plays would improve Pitt’s offense. Orndoff plays second fiddle to senior tight end J.P. Holtz, but is still a more-than-reliable pass catcher in his own right. Running some routes out of the backfield could confuse opposing defensive coordinators. It would also be fun to see him get a rushing attempt in short-yardage situations simply for the rhyming opportunities — “a handoff to Orndoff.”

Artie Rowell to kick returner This would be so much fun. Just do it for one play. If anyone deserves a chance for a touchdown, it’s Rowell, who has been at Pitt so long that Dave Wannstedt recruited him. It’s time to give him his Dan Connolly moment. Watching big offensive linemen rumble down the field amid a frenzy of blockers and tacklers is a work of art, as impressive as any Monet or Picasso. It’s better than a safety, a completed hail mary, a halfback pass or a 63-yard field goal. Hear me out, and put him in.

Pat Narduzzi to linebacker Pat Narduzzi doesn’t have any eligibility left, so this one is purely hypothetical. But I do know that the guy has more than enough energy to man the middle linebacker position for a few plays a game. It’s easy to imagine Narduzzi, after his defense gives up a big play, tossing his headset and grabbing an extra pair of shoulder pads on the sideline, then running out to the field and barking out plays. The move would not only add a spark of energy to the defensive unit, but would also facilitate communication between the play callers and the defense.

Chad Voytik, Adam Bertke and Ben DiNucci to Pitt dance Did you see these guys’ moves? If I wasn’t wearing my glasses, I could have easily mistaken Voytik, Bertke and DiNucci for Scary, Sporty and Posh Spice – their performance was that good. While the Pitt dance crew is already talented, adding the likes of these three quarterbacks would put their performances over the top, amping up the Heinz Field game day environment.

Ryan Winslow to backup quarterback With the three quarterbacks now serving as dance team members, Pitt will need to find a new backup to starting signal-caller Nathan Peterman. While wide receiver Tyler Boyd has shined at throwing the football when the opportunity arose, the Panthers need his presence as a wideout. So, punter Ryan Winslow would be the logical choice. His main credential is completing arguably the biggest pass of Pitt’s season against Syracuse on Oct. 24, when he converted on a fake punt attempt by lofting a ball to Matt Galambos for a fourth quarter first down. Winslow has completed 100 percent of his passes this year, albeit it is only that one attempt. Still, who is to say he couldn’t keep up that pace if Peterman were to go down with an injury?