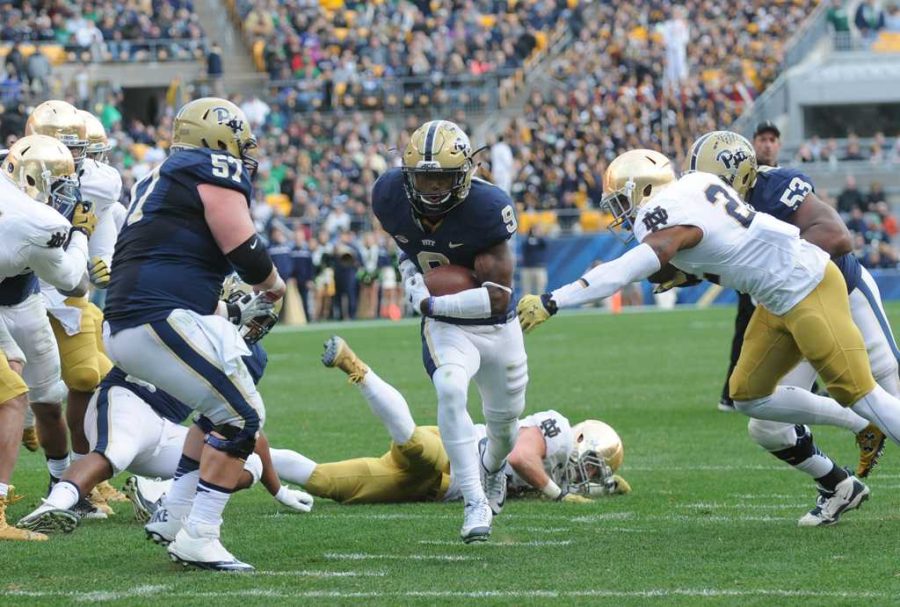 Jordan Whitehead runs in the first of his two touchdown on Saturday. Heather Tennant | Staff Photographer

Coming off two consecutive losses, Pitt head coach Pat Narduzzi and his team will try to shape up for the final three games of the season, and continue to hunt for a Coastal title.

In that time, Narduzzi will have plenty to ponder, notably his usage on offense of Jordan Whitehead, as well as improving fundamentals. Narduzzi touched on those topics at his weekly press conference at Pitt’s Southside facilities in preparation for Saturday’s contest against Duke.

Working on the little things

After some recent struggles on the defensive line, Narduzzi discussed the specifics of the end and tackle positions.

“Sometimes we may go on what we call a take move when a d-lineman’s going to go from this gap to this gap. He’s supposed to take a nice short step because they’re moving toward him,” Narduzzi said. “You take too big of a step and you go two gaps, it becomes a problem, and you have two open gaps.”

Then, for his defensive ends, the players have adjusted their footwork more so for rushing the passer at times, even though Narduzzi stresses that limiting the run is top priority.

“Some of the zone plays our defensive ends are working out instead of in. [That] may be good for pass rush but not necessarily for the run. You must stop the run first,” Narduzzi said.

Still, Narduzzi stresses that these are just fundamental things they can correct. He’s seen his players execute properly in practice and in some games as well —  he cited the Virginia Tech game as an example —  but they just need to do it more consistently.

“You could do them right in practice days but then go onto the game, then things happen,” Narduzzi said. “All the sudden they get a run on you. Sometimes you see where guys are trying to overcompensate.”

Leading up to the Notre Dame game, Jordan Whitehead mainly played as Pitt’s starting strong safety. Offensive coordinator Jim Chaney had begged Narduzzi to let him utilize Whitehead’s athleticism for weeks, and finally he got his wish.

Narduzzi held off using Whitehead, as he wanted to wait until he felt he was comfortable on defense.

“At this point I think he knows what he’s doing on defense. He’s got a pretty good grasp of what he has to do back there,” Narduzzi said.

Whitehead took advantage of the opportunity, rushing for 27 yards and two touchdowns. What Narduzzi saw in Whitehead’s strong offensive play is excellent speed and quickness, as well as his innate skill to score.

“He has the ability to hit a small hole and get vertical and get in the end zone. Those are things we need,” Narduzzi said.

Still, Narduzzi stressed that the coaching staff must limit Whitehead’s usage on offense, as he looks at him as a defensive player first. As far as his prognostication going forward, Narduzzi said the plan is “a lot of defense and a little bit of offense.” That ratio will likely not change in the coming weeks or years, Narduzzi said.

“I think he’s a great player on defense too. Golly, he makes a ton of plays over there,” Narduzzi said. “If we don’t have him back there I wonder what the yards look like.”

Going into every game, Narduzzi asserted that he never believes his team is lacking substantially at any position. A glass half-full coach, he feels that they can overcome challenges with game planning.

“I don’t feel like we have a deficiency any week we go out there. We’re going to try to get our matchups, and we’ve got to make plays,” Narduzzi said.

Still, Narduzzi conceded he can’t necessarily address some talent or depth issues during the season. In that aspect, Narduzzi said he’s learned the past two weeks that his team doesn’t match up with the best.

“Obviously, we don’t [measure up]. We see some deficiencies and spots where we need to get better. We’ll address that in recruiting,” Narduzzi said.

Narduzzi said the Panthers need to bolster their running backs. Going into the Notre Dame game, Narduzzi said he and his team watched some of Pitt’s great plays against the Fighting Irish in the past. The footage revealed a trend, the plays were coming via impressive individual efforts by Pitt running backs.

“You have to have a guy back there that can be a playmaker,” Narduzzi said.

In the meantime, Narduzzi will stress fundamentals and execution. On both sides of the ball, he saw plenty of room for improvement.

“I think we had six or seven drops on offense and defensively we’ve got guys in a position to make plays,” Narduzzi said.