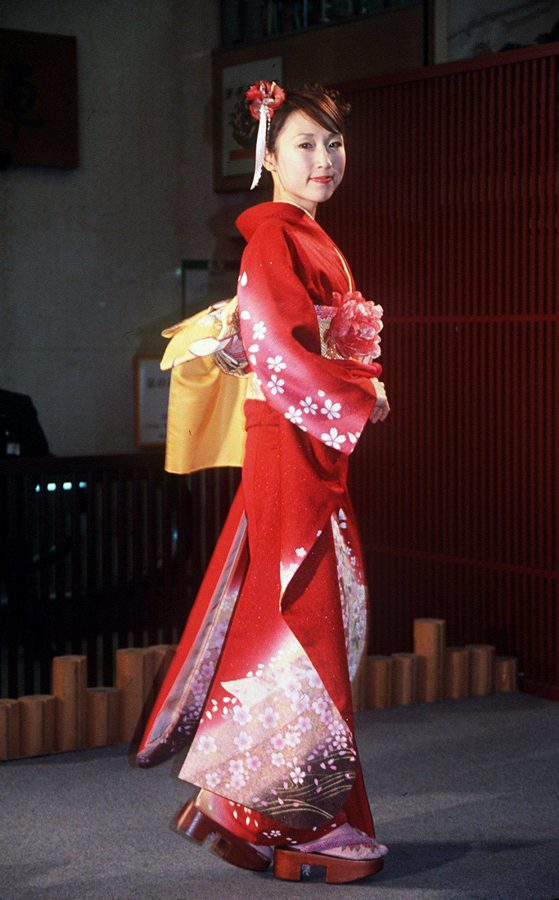 A kimono fashion show can be seen at Kaikan Nishjin Textile in Kyoto. The visitor can rent a kimono and wear it for a day of touring the temples and sights of Kyoto; the practice is popular with teen Japanese girls. (Anne Chalfant/Contra Costa Times/KRT)

By Timothy Nerozzi / For The Pitt News

Respect for other cultures is a noble endeavor — but we’ve taken it too far.

The Museum of Fine Arts in Boston ran an art exhibit this summer based on the famous Claude Monet painting, “La Japonaise.” The museum had planned to run the exhibit until July 29. The impressionist painting of a woman in a traditional Japanese kimono was on display, as well as a handmade Japanese replica of the kimono pictured, which visitors were encouraged to try on and take pictures with in front of the iconic painting.

That is, until an online-organized group of protestors deemed the exhibit racist, orientalist and, perhaps most damning of all, an example of “cultural appropriation.” Critics protested the idea of Westerners wearing traditional Japanese garments without thorough knowledge of the historical and cultural significance of the kimono.

The museum, filled with protestors carrying signs deriding the exhibit, removed the try-on kimono and canceled the exhibit on July 8. Instead, the museum will move the painting and kimono in with the other impressionist works and only allow guests to touch the kimono.

The sharing and remixing of cultural treasures is a beautiful thing and has been a source of innovation for centuries. The flagrant use of the accusation “cultural appropriation” boils down to well-meaning — yet misguided —  barriers between cultures.

Japan has a long history of appropriating ideas and artifacts from other cultures. There are the kanji, Chinese characters taken straight from China’s language and reworked to fit Japanese. Even the kimono protesters are so fiercely defending was originally an undergarment Japan adopted from China.

To accurately claim that someone appropriates something from its “true” owner, we would need to trace human history back to arbitrarily decisions for when something became unique, separate from surrounding influence. History isn’t that clear, and the blurriness of historical trends and appropriation of cultural inventions is what makes our world diverse.

Cultural appropriation is not exclusively a Japanese issue, obviously. Westerners are fighting the war against cultural appropriation almost exclusively in Western countries. It’s a war against people taking an interest in things that don’t belong to their ethnic group. It’s gotten so out of hand that sometimes criticism arises toward people taking interest in their own ethnic heritage.

Those People, a self-described “black magazine for people too hip for black magazines” ran an article on Sept. 3, telling African-Americans to stop culturally appropriating African culture.

“You take a cultural dress, mark or trait, with all its religious and historical connotations, dilute it and bring it out for occasions when you want to look ‘trendy,’” writes Zipporah Gene, a writer for Those People.

Is this the kind of global community we want to fight for? One where society allows you to wear things based on your skin color, geographical location, ties to communities and every other restriction that it can think up? Do we want to place this kind of bureaucracy on our outward appearance?

News outlets criticized Pharrell Williams’ cover photo for the magazine Elle UK for appropriating Native American culture because the photo lacked the culmination of these characteristics.

“I respect and honor every kind of race, background and culture. I am genuinely sorry.”

These are the resigned words of Williams, renowned musician and fashion designer, after he faced intense backlash over his cover photo. On the cover, Williams wears a replica Native American headdress. Vulture, an online entertainment outlet, called the photo an example of “cultural appropriation.”

Various outlets, like the Independent, even threw around the term “red face.” This term alludes to the historic minstrel shows put on in the United States during Jim Crow, dubbed “blackface.” This is a mind-boggling jump in logic.

Williams wore a traditional headdress for the simple reason that he enjoyed how it looked. This does not in any way parallel the use of shoe polish and lipstick to mimic and deride African-Americans for the enjoyment of white audiences. One derives from a place of admiration for a headdress — the other is an open mocking of a race of people, misrepresenting and stigmatizing them.

To tell Williams, a black American, that he is committing as serious an offense as minstrelsy and Jim Crow stage performances is absurd and only shows how identity politics has warped our views of globalization and cross-cultural exchange.

As ridiculous as the criticism is, it’s pointless if you’re judging based on ethnicity.

Williams has Native American lineage, as he stated in an interview with O, the Oprah Magazine. Did he contribute greatly to Native American culture? Many think not. War bonnets are associated with the greatest warriors in Native American tradition — so, in critics’ minds, to wear one you must be a great warrior or an active and influential member of the culture.

As Gyasi Ross for the Huffington Post put it, “It’s not simply a matter of being ‘Native’ either. It’s not that simple. Most Natives will never earn the right to wear a headdress. It’s not a racial thing, it’s an experience thing, a ‘merit’ thing.”

If we consider hats and articles of clothing originating from garments that highly respected warriors of a culture wore to be insensitive, then fashionistas, and the public at large, have a lot of explaining to do.

Has every rap artist wearing fake dog tags put their life on the line for their country? Is every student getting their viking helmets from Peter’s Pub on their 21st birthday a roaming warrior paving the way for Scandinavia? Has every fashion-conscious Parisian socialite wearing an American-style military jacket served in the armed forces? Don’t be ridiculous.

I’m not advocating for “color blindness,” and I’d hate to see the thousands of cultural identities that make up this world smashed into a homogenous blob without individuality. Our differences are what make these aesthetics and works of creative inspiration so exciting and interesting.

I am advocating for an end to efforts to segregate and divide cultural artifacts. There is no place in the 21st century for identity politics to run rampant and prevent the sharing of ideas and artifacts due to preconceived ideas of cultural “ownership.” History has shown us that cultures are better together, mixed into a blurry melting pot of cross-pollination.

So let’s enjoy the beautiful works that humans have created, free from arbitrary boundaries based in race and geography.

Editor’s note: This column is part of a point-counterpoint set of columns on cultural appropriation. For the corresponding column, see “Point-Counterpoint: Cultural Appropriation ignores privilege.”