No need to protest about protests 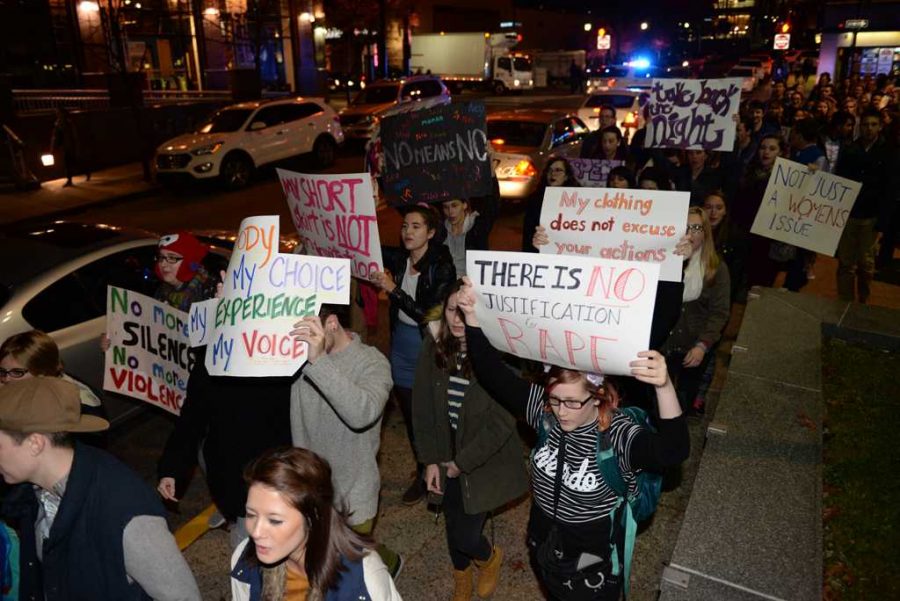 Students protested against sexual assault in October as part of Pitt's annual Take Back the Night. Wenhao Wu | Staff Photographer

Last Wednesday, at a student-led rally in solidarity with people of color at Mizzou, I overheard a police officer condemning our protest.

The officer described us simply as a bunch of kids who have “no head on their shoulders.” According to him, we have “no idea” what we’re doing — we “just like to make noise.”

While I was saddened by the officer’s opinion, I was far from surprised. Anti-activist sentiment is everywhere, and it is always the same. From the lunch counter sit-ins of the 1960s, to the multiple Black Lives Matter and Fight for Fifteen marches of the past year, conservatives always depict protesters, activists and organizers in the same way — loud, unbridled, misinformed and reckless.

Yet, this caricature of us is not just ugly, but untrue. While many look down on protesters and direct action — or public demonstration — this viewpoint overlooks the history of activism as a necessary and effective branch of society. It has been activism that has pushed our society to address vital issues in the past.

Historically, activism has spurred necessary change within our society. Make no mistake, the legendary social justice movements of our country have taken place in the streets, not in political offices.

It was not Lyndon B. Johnson that changed our country’s civil rights laws, but Martin Luther King Jr., the Greensboro Four, Fannie Lou Hamer, and many more men and women on the ground and in the streets who fought for their lives and for racial justice.

Activism garners media attention that places pressure on politicians to take action. Feminist suffragette Alice Paul demonstrated how and why this system works. Paul, alongside other suffragettes, picketed in front of the White House to demand more from Woodrow Wilson, who had been largely silent on the issue of women’s suffrage.

After countless demonstrations, the police arrested Paul and many of her supporters in June 1917, an act which left the general public shocked and dismayed. The Boston Globe wrote, “The suffragettes had been abused and bruised … until its efforts to attract the president’s attention … sunk into the conscience of the whole nation.”

If the arrests put the president in a difficult position, Paul’s subsequent hunger strike only added to the pressure by maximizing publicity. Combined with continuing demonstrations, Paul’s hunger strike pushed Wilson to label women’s suffrage as an urgent war measure and push Congress to pass the Nineteenth Amendment, which finally granted women the right to vote in 1920.

This stands true today as well. We do not owe recent social justice victories — from the rejection of the Keystone XL pipeline to the wave of cities raising their minimum wage to $15 per hour — to our politicians, but to the those who have been demonstrating and organizing for years to demand better policies.

Activism is a solution to the feeling of helplessness that paralyzes our democracy. In a recent Harvard study, 83 percent of youth said they had no faith in Congress. Meanwhile, states are eroding voting rights for marginalized groups across the country. Our political system is stuck and consistently disappoints, as it forces us to wait for our politicians to address issues according to their timeline, despite the fact that we need change now.

Large scale social movements rise up as a last resort after our democracy fails to address an issue. Black Lives Matter, the Fight for Fifteen and the Trans Lives Matter movements all rose from an urgent necessity to address the government’s failure to ensure the well-being of its citizens, as it allowed for practices and policies that subjected people to poverty, police brutality and violence.

Despite the impressive history of activism in the United States and all of its potential, many continue to see the activists of today as too loud, obnoxious and out of touch.

The officer’s negative perception of Mizzou protesters sounds a lot like the numerous Yik Yak posts at Pitt describing Black Lives Matter activists as people “in need of an education.” It reminds me of the backlash on social media that came in response to a student-led march against student debt that shut down Forbes and Fifth avenues, and it reminds me of a student who posted a picture of her flipping off Fight for Fifteen protesters from her Towers window to her Snapchat story.

Despite the negativity, we need activism to address the injustice that continues to plague our society. Even if you refuse to see it, we do still exist in a society that inherently and structurally devalues the lives of black and non-cisgendered people. We live in a state that allows employees to pay their workers poverty wages or fire them because of their sexuality and a culture that tells women to cover up instead of telling men not to rape people. If we do not stand up against these societal wrongs, nothing will change.

Those who criticize protesters do not realize that activism is not a hobby, but a necessity. Direct action is the only way to instigate true change, and it is taken when things can no longer carry on as they are.

Next time you see a rally, think twice about the negative stereotypes you’ve been told, and remember that I am not just fighting for me — I am fighting for you.

Alyssa primarily writes on social justice and political issues for The Pitt News.

Write to her at aal43@pitt.edu