Students back union push at panel 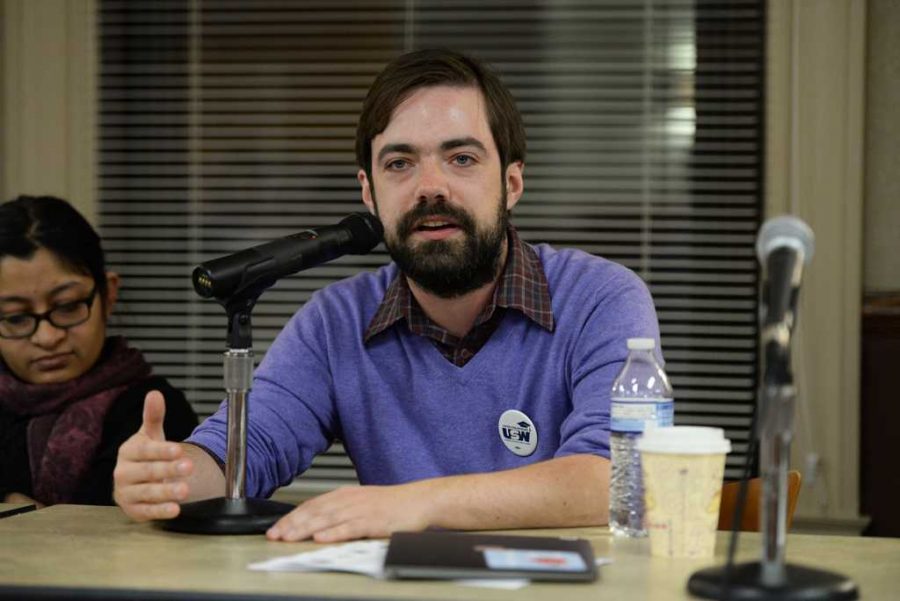 When Sarah Leavens got a teaching job at Pitt, she thought it was a good fit. Three years later, she felt constricted.

“I got into teaching because I’m a writer and I love teaching and I love writing,” Leavens said. “It seemed like a dream, and it seems like I should be living the dream.”

Leavens is only guaranteed a full-time job for the rest of the year, which means that next year she may not have a job. Leavens said her situation feels like exploitation, especially because she has little job security.

Now, Leavens is a part of the Pitt faculty’s push to form a campus-wide union, an effort English professor Robin Clarke announced publicly in October.

As part of her involvement in the union push, Leavens spoke at a panel discussion Wednesday night. Fight Back for Pitt Faculty, a student organization that advocates for the rights of faculty like Leavens, hosted the panel.

Students founded Fight Back for Pitt Faculty this semester. The group falls under the umbrella of the United Students Against Sweatshops, a national organization on more than 150 campuses that advocates for the rights of garment and campus workers, as well as for educational justice.

In addition to Leavens, the panel consisted of Pitt faculty members Peter Campbell, assistant professor in the English department, and Beverly Gaddy, associate professor of political science at Pitt-Greensburg. Titas Chakraborty, a history graduate student, and Alyssa Lieberman, president of Fight Back for Pitt Faculty, also sat on the panel.

The panel members explained why the faculty wishes to unionize, citing the $13 to $14 per hour wage for adjunct professors and new visiting lecturers, as well as the difficulty some faculty members have said they face in obtaining tenure.

Pitt spokesperson Ken Service said Pitt has made progress with faculty in the past through working closely with them, though the University hasn’t released a formal statement about the union.

“Moving forward, it would seem that the best path to achieve the collective goals of the University would be to continue working together within the collegial and constructive environment that defines our University community,” Service said.

Although Leavens became a full-time lecturer in the English department this school year, for the previous two years she taught part-time at Pitt and also worked a night job at Allegro Hearth Bakery in Squirrel Hill.

While working at the bakery, Leavens had no control over her teaching schedule. Leavens said that one semester she taught a night class, then worked at the bakery afterward and the next morning had to teach early classes.

“Worst case scenario, it just exhausts you on all realms,” Leavens said.

According to Campbell and the other panel members, the way to ensure that Pitt treats faculty fairly and gives them job security is to create a union of faculty of all employment statuses including part-time, adjunct and tenured professors.

“A union, especially one with faculty of all ranks, will work against precarity and contingency in general,” Campbell said.

Although Campbell sees potential benefits in unionizing, the panel said not every faculty member will be supportive of the unionization efforts.

“There are going to be people who resist, I’ve already talked to some of them,” Gaddy said. “Some people feel pretty safe, feel pretty secure and don’t want to share that with others.”

Kai Pang, a senior majoring in economics and philosophy and the secretary of Fight Back for Pitt Faculty, served as moderator during Wednesday night’s panel. Pang said the panel allowed faculty a chance to express their concerns and to explain the need to unionize.

“One of the primary purposes is to give faculty the chance to speak directly to an audience of undergrads,” Pang said. “It’s really a chance for [faculty] to say what they want to say.”

Although the faculty has attempted to unionize in the past, the efforts have never been entirely successful. Gaddy said she thinks this time, with backing from student organizations like Fight Back for Pitt Faculty, the efforts will succeed.

“This time is different, and I think that this time with the support of the community, of parents, of students, of others, it’s going to happen,” Gaddy said. “This time is the charm.”