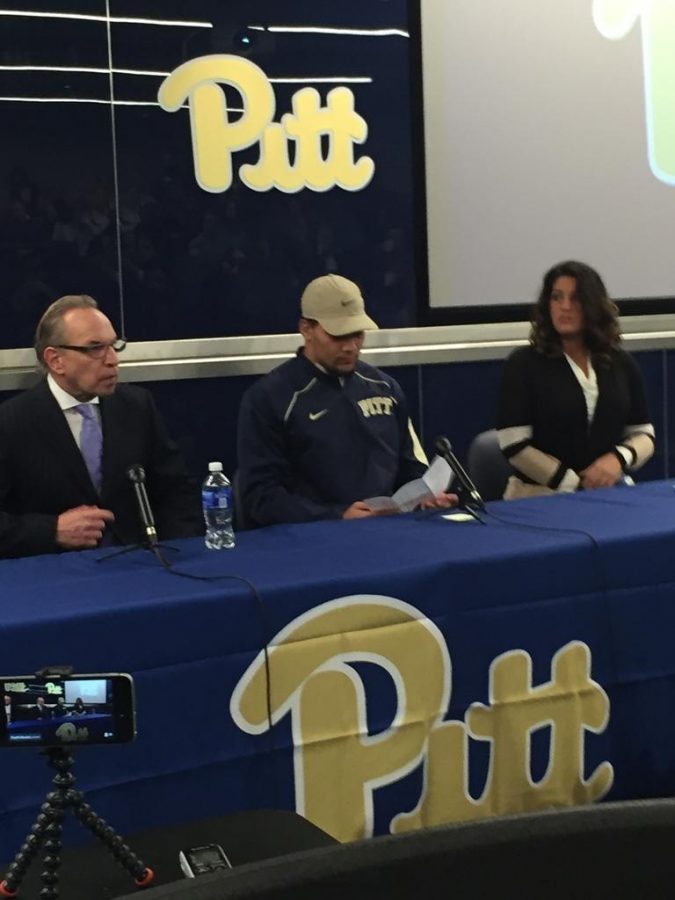 Pitt star running back James Conner announced that he has been diagnosed with Stage 2 Hodgkin’s Lymphoma, a form of cancer, at a press conference Friday afternoon.

Conner, who missed the season with a torn MCL, received the diagnosis on Thanksgiving.

“When I heard I got cancer, I was a little scared,” Conner said. “But fear is a choice. I chose not to fear cancer. I’m gonna fight it and I’m gonna beat this thing.”

According to Dr. Stanley Marks, the Deputy Director of Clinical Services for the UPMC Cancer Center, said Conner will begin chemotherapy on Tuesday. He will undergo two sessions a week for the next six months at the Lemieux Center at the Hillman Cancer Center.

Marks said the diagnosis came after Conner experienced an extended period of “vague symptoms,” including sinus issues, swelling around his face and decreased stamina.

The cancer is in Conner’s lymph nodes is his neck and chest, which is why the diagnosis was Stage 2. Marks described the size of the growth as “significant,” but remained positive regarding Conner’s prognosis.

“This is one of the more common types of cancer we see in men his age,” Marks said. “It is a highly curable cancer. We are optimistic that James will be cured.”

Marks said the cure rate sits at about 85 to 95 percent. It is the same type of cancer that afflicted Kansas City Chiefs safety Eric Berry in 2014, who recovered and has returned to the field.

Marks also treated former Pittsburgh Steeler Merril Hoge, who had lymphoma. The doctor said he hopes to get Hoge to speak to Conner about the diagnosis.

Conner is grateful for the likes of Marks and company providing him treatment.

“Thank god I chose Pitt, because now I have the best doctors in the country,” Conner said.

Conner said he will play football again, and will “be right back at Heinz Field again, with the best coaches and teammates in the country.”

“There are so many people in the world just this week that found out they have cancer,” Conner said. “I just want them to know that we can beat it together.”

Coach Pat Narduzzi, Conner’s mother and several of his teammates were there to support him at the press conference at the UPMC Sports Performance Complex in South Side.

“Cancer started the fight and James is going to finish it,” Narduzzi said.
Narduzzi said that Pitt informed Conner’s teammates today of his diagnosis.

Conner’s mother, Kelly Patterson, expressed her son’s thanks for the community’s backing.

“He appreciates the support,” Patterson said. “He knows the city is behind him.”

Conner maintained a cool demeanor throughout the press conference.