Conner strong: James Conner begins own fight after history of helping others

Mike Gallagher, a close family friend of James Conner, arrived at the star’s recovery room just as his anesthesia began to wear off. Conner, a Pitt football running back, underwent a biopsy last Tuesday that would later reveal he had cancer.

Gallagher — or “Pops” as Conner calls him — had returned from a doctor’s appointment regarding his chronic kidney disease and was anxious to see the young man who has always been there for Gallagher and his family.

“The very first thing he said when waking up from the biopsy was, ‘Pops, what did the doctors say about your kidney?’” Gallagher said. “My son and his mom looked at us and I just said, ‘Is this kid for real?’”

After the initial shock, this selfless response didn’t surprise Gallagher.

“On the field, he’s a beast,” Gallagher said. “But he’s also the kindest, most gentle human being in the whole world.”

Following his press conference announcing his diagnosis of Hodgkin’s lymphoma on Friday, the star running back was inundated with support, ranging from the likes of hockey legend Mario Lemieux, who also had the disease, to Pennsylvania Gov. Tom Wolf.

But the twenty-year-old has frequently been on the other end of this exchange, helping others in their times of trouble. Long before his cancer diagnosis and his legacy on the gridiron at Heinz Field, Conner was a dedicated volunteer at the National Kidney Foundation, the Mel Blount Youth Home and various children’s hospitals throughout Pittsburgh. His service warranted him recognition as an American Football Coaches Association Good Works Team member this September.

Before all of this, Conner started helping others through his relationship with Gallagher’s son Sean, who has been best friends with Conner “since they could walk” growing up in Erie, Pennsylvania. Mike Gallagher recalled how important Conner was in helping his daughter Meghan, who was diagnosed with kidney disease in high school when Conner was a senior, make it through her extended hospital stays. 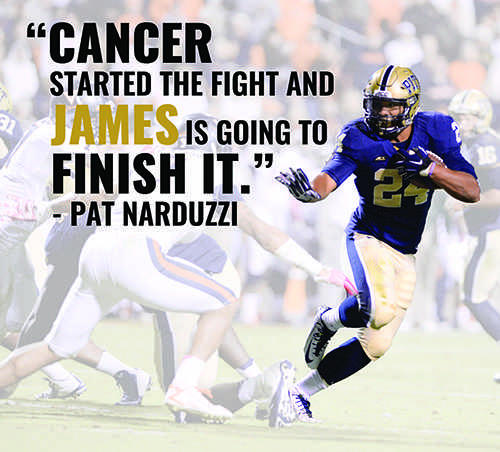 Gallagher said Conner would join Sean Gallagher and travel to Hamot Medical Center and see Meghan, who loved to visit Lake Erie and take videos of the sunset before she got sick. Her hospital room didn’t face the lake, but Conner approached this problem with open arms.

“He would carry her to the other end of the hospital and sit and watch the sunset with her,” Gallagher said. “And then he’d carry her back. I always think about that. Meghan will always bring it up.”

With kidney disease affecting his close family friends, Conner made it a point to work for the cause.

“It really broadened his perspective,” Sean Gallagher said. “How he could affect people not only in Erie, but all over the world.”

According to National Kidney Foundation Development Director Melissa Sidick, who met Conner at the 2009 Erie Kidney Walk, he exhibited an enthusiasm for the volunteer work that was rare for a person his age.

“[Conner] would be that one teenager that would come behind the booth and say, ‘What can I help you with? What can I do?’” Sidick said. “He always had such a respectfulness about him, he was always so friendly and so nice, always ready to throw his hands in and help.”

Conner continued to help others throughout his college career, finding time between classes and practices to make his way back to Erie, where Sidick said Conner’s ability and zeal for volunteering was unmatched. The foundation honored him in 2015 with the “Small Hands, Big Heart” award, recognizing his contributions to the cause.

“Oh my gosh, he was unbelievable,” Sidick said. “At the end of the day, [young people] are worried more about going out and having fun. But not James. He’s a gentle soul, he’s quiet, but he does really wonderful things.”

According to Sidick, the running back continued to participate in the walk up through 2014, well after he had become a star at Pitt.

“It’s important to him to make sure that he continues to be a good role model for others,” Sidick said. “That he’s not just known for being able to catch a ball, run a ball, throw a ball, but that he’s known in the community to do good things.”

Some of Conner’s most impactful work has been on a person-to-person basis, including his presence in Liann Tsoukas’ African American History course last spring.

At the start of that term, doctors found that Tsoukas’ daughter, then-14-year-old Diana Beasley, had non-Hodgkin’s lymphoma.

During one of her lectures after the diagnosis, she locked eyes with Conner in the 80-student lecture. She had taught him in his freshman year and asked to talk to him after class.

“He waited there in Posvar [Hall] for me and I just lost it,” Tsoukas said. “I told him, ‘My daughter has cancer.’ And he was incredible.”

Tsoukas said Conner’s presence in class bolstered her spirits, as she was frequently tired by long stays in the hospital.

“He was just incredibly engaged with me on a level that was extraordinarily mature and beyond helpful,” Tsoukas said. “I honestly can say that I got through that hour every day in that class because he saved me.”

But Conner surpassed expectations, as his help extended beyond the classroom. He wanted to reach out to Beasley.

Conner brought something into class one day, asking Tsoukas if she would deliver it to her daughter.

Inside of the parcel was an autographed photo of Conner and a handwritten letter. While Beasley said she wishes to keep the letter personal — she’s only shown it to a select number of people — she said Conner shared a story about a hometown friend who had cancer, inspiring confidence.

“It meant a lot because I had been getting a lot of cards that said, ‘Get well,’” Beasley said. “But to get an actual letter, just talking about how someone really relates and that they’re thinking of me is really cool and really nice.”

“The letter was the most careful piece of writing. Every word counted,” Tsoukas said. “It was beautiful.”

Beasley, who is now cancer free at age 15, tweeted at Conner after news of his Hodgkin’s lymphoma broke, saying she’ll write a letter of her own to Conner now.

I’ll send you a letter of my own soon. @JamesConner_ pic.twitter.com/RKLOvuMKyE

“It’s gonna be hard at times, but in the end it all goes back to normal so quickly,” Beasley said later. “You can’t give up. You have to keep smiling.”

Throughout his life, Conner has been there for those in trying circumstances, whether for close friends like the Gallaghers or strangers like Beasley. What goes around comes around, and Conner will have an army of supporters throughout his fight.

Gallagher said he knows this setback will all work itself out. Prior to his diagnosis, Gallagher said Conner had been struggling with his decision regarding whether or not to enter the NFL Draft. He was worried about letting down Pitt fans by leaving. But now, Conner said he will beat cancer and return to Heinz Field next season.